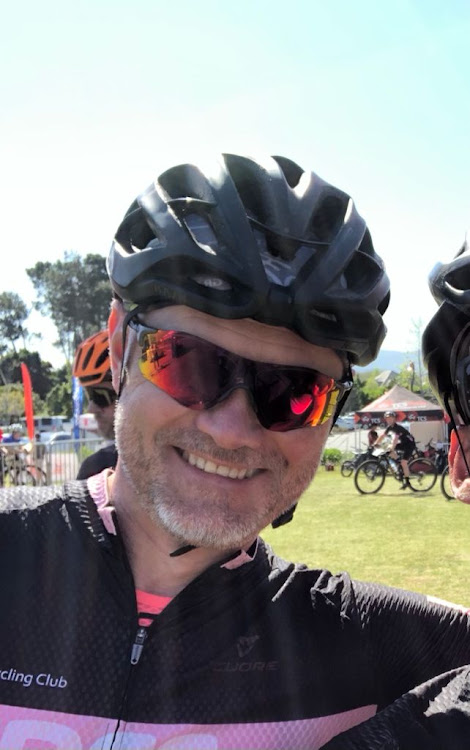 Alex Otto died while cycling when he was hit and dragged under a taxi.
Image: Supplied

A keen cyclist, husband, dad, friend, brother, former banker turned corporate exec, colleague. These are the words used to describe Alex Otto, the man who died tragically in a horror crash while out riding near his Johannesburg home on Sunday morning.

Otto and a fellow cyclist were riding in Bowling Avenue, Kelvin, when a speeding taxi ploughed into them.

Otto, who turned 50 this year, was hit from behind and pulled under the taxi, while his co-cyclist was knocked over.

A witness on the scene said Otto was dragged under the taxi for 290m before the driver came to a stop. He then bolted, but was grabbed by two security guards who dragged him back to the scene.

The driver, who is suspected to have been under the influence of alcohol, was arrested and booked into the Sandton police cells. He is facing criminal charges.

Johannesburg metro police spokesperson Chief Superintendent Wayne Minnaar said the taxi driver would be charged with culpable homicide, with possible additional charges if forensic investigations done on his impounded taxi find that the vehicle was not roadworthy or if he claims a defence, such as brake failure.

A second charge — also to be determined by the results of blood tests — would be drunken driving.

A cyclist, estimated to be about 50 years old, was killed by a speeding taxi this morning when he was crushed and dragged for over half a kilometre ...
News
7 months ago

Otto’s training partner was knocked down and taken to Sunninghill Hospital after the crash. He was discharged the same day, but remains traumatised and declined to speak to TimesLIVE about his experience.

Otto’s family and friends were also extremely distraught and unable to speak about the incident.

Otto was well known in the Joburg cycling community. He was training to ride in the Cape Town Cycle Tour this weekend when he died.

He leaves behind his wife Janet and two daughters.

He was a member of the Parks Cycling Club, where their most recent scoreboard lists him in third place in distance, having clocked up 293.7km on his bike in the past week.

Fifteen commuters were injured in an early morning crash between a municipal bus and a minibus taxi in Durban on Monday.
News
7 months ago

A child was killed in Lanseria on Sunday night after a crash on the N14.
News
7 months ago

A Gauteng traffic officer died after an alleged unroadworthy taxi crashed into a roadside checkpoint on the R551 on Wednesday morning.
News
7 months ago