Confirmed: Naked destruction of property will get you arrested 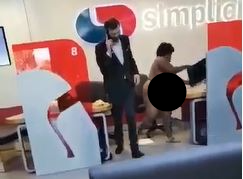 The naked woman who trashed a Cape Town Capitec Bank branch on Tuesday has been arrested.
Image: Screengrab

The woman who trashed a bank in the buff has been arrested.

Police spokesperson Capt FC Van Wyk said the woman, aged 41, was arrested on Thursday and will appear in the Strand magistrate's court once charged.

He said a malicious damage to property case was opened for investigation at Strand SAPS.

Capitec is offering its traumatised Cape Town staff counselling after the incident.

In a statement, the bank said the woman had a savings account with the bank but not a line of credit. This after the speculation on social media about why the woman did what she did.

Capitec Bank as puzzled as you are over naked lady, seen in other shops too

“We have extended counselling to all affected employees.”

A viral video shows the woman, wearing only a pair of shoes, rushing to a bank consultant’s desk on Tuesday and throwing the electronic equipment on the floor as the male consultant sneaks past her to safety. She is then seen in fleeting images (as the person recording her is also running to safety) trashing other equipment from nearby desks.

In 30 seconds, the woman is able to clear the area of customers while shouting.

The clearly distressed woman can only be heard asking, “Where is the money?”

A recent survey of 1,200 South Africans shows financial and pandemic-related worries are taking a severe toll on their mental health.
News
8 months ago

SA nudist bares all to address the stigma around naturism

Once torn between traditions and longing, Vogani Nkuna overcame his guilt and found freedom, peace and happiness in naturism
Lifestyle
1 year ago

A lack of disclosure from Sanlam saw a Verulam lady agree to a sixth-month payment holiday which cost her R61,600
Opinion & Analysis
8 months ago

WENDY KNOWLER | What’s with the ghosting? When companies just ignore your complaints

Some firms claim to treat their customers right, but you’ll often find posts begging them to respond to queries
Opinion & Analysis
9 months ago