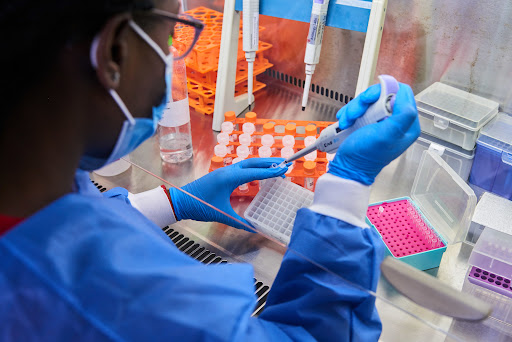 South Africa’s daily coronavirus test positivity rate rose to its highest level yet on Wednesday amid a fifth wave of infections.
Image: Bloomberg

SA’s daily Covid-19 test positivity rate rose to its highest level yet on Wednesday amid the fifth wave of infections.

There were 6,170 new Covid-19 cases identified, representing a 22.6% positivity rate of those tested, with the majority of the cases in Gauteng at 41%, followed by KwaZulu-Natal with 27%, the National Institute for Communicable Diseases said on its website.

SA is still a long way off previous records. The largest daily count for new cases was 26,976, reached on December 15 and the highest positivity rate was 33.4%, reported on January 4. But the fifth wave comes as winter starts and just after the country ended its more than two-year national state of disaster.

While the state of disaster has ended, the government has implemented new health legislation that will require proof of vaccination or negative tests for some gatherings and the continued wearing of masks in indoor spaces.

It is possible the fifth wave will be the least onerous so far. The new Omicron sublineages appear to be less severe than the original and the fifth wave is unlikely to cause “even anything close” to the number of hospitalisations and deaths that occurred when Omicron first appeared in November, according to Prof Shabir Madhi, a vaccinologist from the University of the Witwatersrand.

Nonetheless, health experts and the government are urging citizens to get vaccinated, receive their boosters and continue taking precautions.

The health department has extended the deadline for public comment on the proposed Covid-19 regulations by three months.
News
1 month ago

In the latest saga to hit the embattled AngloGold Ashanti Covid-19 field hospital, a suspect has been caught with stolen equipment after the ...
News
1 month ago

AfriForum on Wednesday said it is ready to fight any regulations that aim to make permanent the temporary Covid-19 rules. This as the 30-day ...
News
1 month ago

Daily official updates released by the National Institute for Communicable Diseases (NICD) on Tuesday showed that 3,785 new Covid-19 cases have been ...
News
1 month ago