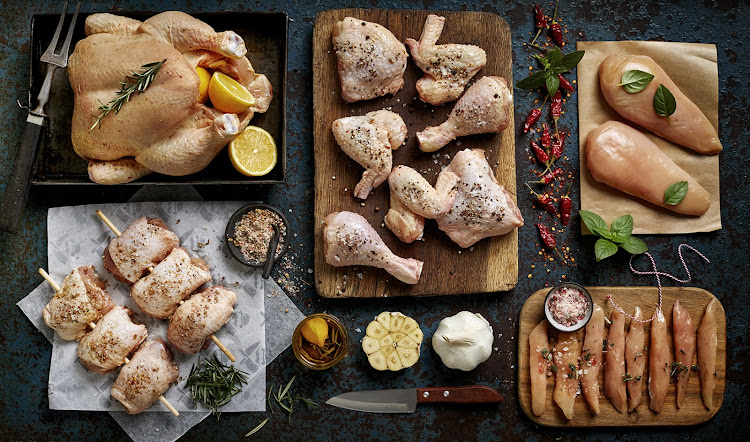 British media this week reported that fast food chains such as Nandos and KFC in the UK had already hiked their prices as the cost to rear poultry shot up after the war in Ukraine.
Image: Buyfresh

South Africans will have to wait to see if the rising cost of poultry due to the war in Ukraine will push up their bill when ordering Nando's, KFC or Chicken Licken.

British media this week reported that fast food chains such as Nandos and KFC in the UK have hiked their prices as the cost to rear poultry shot up with the conflict.

South Africans are paying more than 10% more for basic food items compared with a year ago, and those struggling to keep the lights on are likely to ...
News
4 months ago

“Given the scale of KFC SA and the strong relationships we have with our supply partners, we are working together to strategically navigate these sudden cost pressures. This means that we can continue to offer value meals at everyday prices.

“Our goal is to work with our partners across our supply chain to ensure we are able to offer great value to our consumers despite market volatility,” a KFC spokesperson said.

Chicken Licken declined to comment, while Nando's plans to launch its winter campaign before the end of the month.

The SA Poultry Association's Izaak Breitenbach said the price of chicken had increased due to the rising cost of feed.

“Feed makes up almost 70% of all input costs to produce a chicken. The feed price is made up of maize and soya. What we have seen since April last year is a significant increase of up to 20% in the price of maize and soya and this caused chicken prices to increase. Maize and soya prices are at an all-time high, already affecting the price of chicken, and I believe we are seeing the bulk of these increases in the current prices.”

Running on empty? Top tips to trim your budget as cost of living soars

SURVIVING THE CRUNCH: South Africans are desperate to cut expenses. Here are the do’s and don’ts
News
5 months ago

The FairPlay movement, founded in 2016 to oppose the allegedly unfair trade practises harming the local poultry industry, has called for VAT to be scrapped on chicken products.

“Therefore it is the poor who are most affected by price increases in chicken products. FairPlay first called for the zero-rating of particular chicken products in 2018, when VAT increased from 14% to 15%. After presentations by the poultry industry and FairPlay to parliament and the Woolard panel set up to investigate removing VAT from a number of items, to our great regret, chicken was not on the final list.

“We repeated this call in March this year when the first impact of the Ukraine war on food prices became apparent. It was clear then that food prices would continue to rise because of the war’s impact on grain, fuel and fertiliser prices and supplies. The VAT-free chicken campaign is pro-poor — it is aimed at chicken products most consumed by lower income households.

“These are fresh and frozen whole chicken and fresh and frozen chicken mixed portions, such as the popular individually quick frozen (IQF) bags. Cooked and flavoured chicken and other products favoured by more affluent consumers are excluded. Removing VAT from chicken products most consumed by poor people would lead to an immediate 15% price drop.”

Baird said in addition to public statements, the movement wrote to the presidency and the National Treasury in March 2022, detailing the proposal for the zero-rating of certain chicken products. “We have had no response,” he said.

Conflict, extreme weather and economic shocks increased the number of people facing a severe lack of food by a fifth to 193 million last year and the ...
News
3 months ago

Producer price inflation has climbed to 11.9%, the highest it’s been since 2013
Business Times
3 months ago

SA needs to learn the clever way to slice a chicken

The price of chicken, a staple for many South Africans, could be slashed by cutting tariffs, says the Association of Meat Importers & Exporters.
Opinion & Analysis
3 months ago