Dudula sends in its marchers to launch campaign in Western Cape 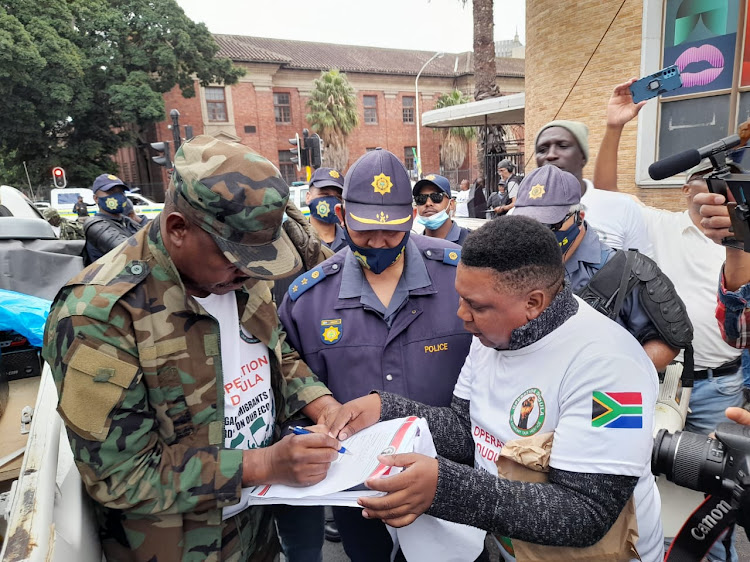 About 250 people, mainly Dudula members from other provinces, marched through the city streets for four hours singing anti-foreigner songs peppered with xenophobic phrases such as “hambani makwerekwere”.

They also chanted: “SA for South Africans, Zimbabwe for Zimbabweans, Mozambique for Mozambicans. Go home and fix your countries.”

The group handed over a memorandum at the Cape Town police station and was expected to hand over another to the department of home affairs, but no official was available to receive it.

“Operation Dudula is a non-political movement that works with communities to highlight social injustices and economic injustices faced by South Africans,” the memorandum handed to the police said.

“The community of Cape Town and surrounding townships are concerned about the proliferation of ... drug-dealing businesses, forced prostitution, gender-based violence, murder (and) illegal immigration and related crimes.”

The movement demanded that police discipline officers who “fail to efficiently execute their duties and functions”. It also urged police to “arrest without any warrant all illegal foreigners roaming the streets of Cape Town”. 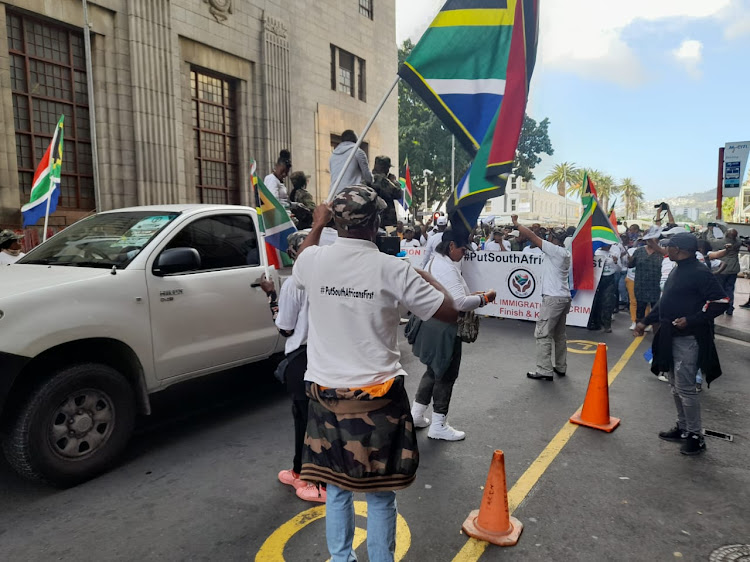 Members of Operation Dudula marched through the Cape Town CBD on Saturday May 14 during the launch of its Western Cape branch.
Image: Philani Nombembe

In the memorandum addressed to home affairs, the movement said Capetonians are concerned about “the increasing number of illegal immigrants that live in their midst”.

It added: “The impact of uncontrolled and unmanaged illegal immigration includes criminal activities by people that cannot be traced due to their illegal status in the country.

“Recent statistics confirm that serious crimes like drug and human trafficking can be attributed to activities by illegal immigrants who conduct these crimes at will because they have nothing to lose. Communities are concerned about the long-term impact of this on the youth of SA and human development of South Africans.”

The movement said there is an “influx of illegal foreigners/migrants from the Southern African Development Community region, Europe, Asia and the entire continent of Africa” as a result of a “dysfunctional border control system” in Cape Town.

“Some of these illegal immigrants are fugitives of justice from their respective countries,” the memorandum reads.

“Once in SA, they continue to commit nefarious crimes which not only affect South Africans but also affect the image of SA internationally. The presence of a large number of illegal foreigners (economic migrants) also encourages delinquent employers to disregard labour laws by sourcing their labour from this pool of illegal migrants because they can be exploited.

“Illegal migrants also put a burden on social services such as housing, health and education as they end up competing with poor South Africans who cannot rely on the provision of these public services from the state.”

The movement demanded that the department scan and verify foreign nationals’ identity documents. It called for the arrest and deportation of all foreign nationals who have contravened SA immigration laws.

“Operation Dudula and the community of Cape Town would like to exercise their civil duty and work with the department of home affairs to ensure compliance with all respective SA laws to manage immigration,” the memorandum said.

“South Africans deserve to live in a safe environment ... where the status of every person residing within SA is known by the department of home affairs and can be accounted for.”

Members of the movement then walked to a chartered bus while a man in a camouflage uniform led them in song from the back of a van.

When the group filed past the Universal Church, the man warned the church against harbouring “illegal foreigners”. He also told homeless people they would beat them up if they smoked drugs. He told them to go find work.

Direct your anger towards parliament and Union Buildings: Steenhuisen

Leader of the official opposition John Steenhuisen has condemned the simmering anger that has culminated in several protests directed at foreign ...
Politics
1 month ago

Mampintsha vs Mmusi? Here’s who Mzansi wants to step in the ring next

"Mampintsha vs Mmusi Maimane. Mmusi still has a score to settle with Mampintsha," wrote one social media user.
TshisaLIVE
1 month ago

The UDM said people's "material needs are not met" and citizens "feel abandoned by government".
News
1 month ago

Operation Dudula has long held that it is neither a xenophobic nor a violent movement and that it is being misrepresented by the media and certain ...
News
1 month ago

Hate thy neighbour: Aversion to the other has a long history in SA

Almost three decades since the birth of the supposed Rainbow Nation, xenophobia is once again under the spotlight. But it’s been around a lot longer ...
Opinion & Analysis
3 weeks ago

An early morning raid has led to the arrest of 20 undocumented people at Chicken Farm informal settlement in Kliptown, Soweto.
News
3 weeks ago