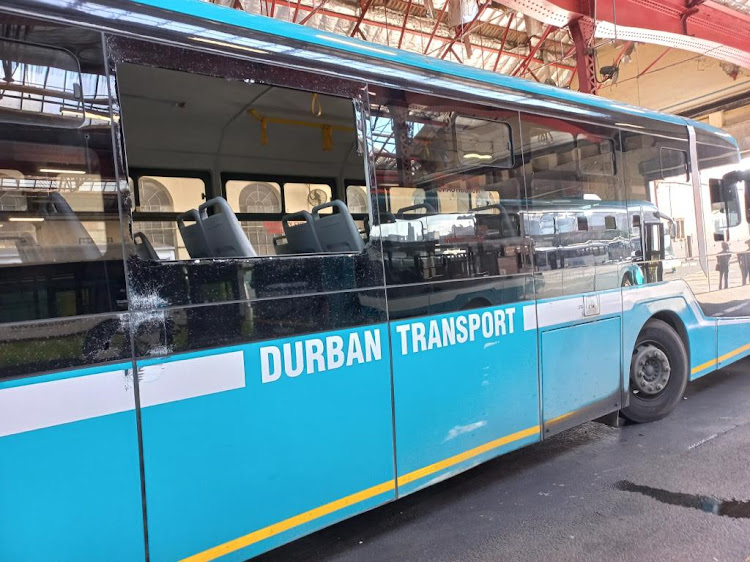 A Durban Transport bus that has been damaged by stoning
Image: Supplied

More than 80 Durban municipal buses have been damaged by stoning, mainly in Umlazi and Ntuzuma, in the past six months.

In a statement on Thursday condemning the vandalism, the eThekwini Municipality said: “The city’s transport authority warns communities against throwing stones at buses and the life-threatening consequences of riding on the rear bumper of a moving bus.”

“Durban Transport has been faced with this dangerous behaviour conducted by young adults including schoolchildren.

“On most afternoons, the stoning and bumper riding of buses has become the norm especially in areas like Umlazi and Ntuzuma,” said Msawakhe Mayisela, municipal spokesperson.

He said about 82 buses had damaged windows caused by the stone throwing in the past six months.

“This affects the city’s ability to provide an efficient public transport service while the windows of the buses are being repaired. This results in unnecessary costs for council and affects bus availability.

“The damage of municipal property is a criminal offence and may lead to prosecution.

“The youth are discouraged from riding on the back of moving buses which poses a danger to them and other motorists and could prove fatal.

“The city urges parents and the public to assist in stopping this dangerous behaviour.

Why must I pay for services if floods destroyed my home? eThekwini municipality explains utility bills

The eThekwini municipality has issued a water billing explainer after the floods, spelling out how and why residents will be billed.
News
2 months ago

Cop arrested in connection with murder of KZN municipal worker

A KwaZulu-Natal police officer investigating the shooting of an eThekwini municipal official who was gunned-down at Durban solid waste offices, is ...
News
2 months ago

Musician and actor Mbuso Khoza has thanked his fans for the love and support they have shown him after his car accident.
TshisaLIVE
2 months ago

In the wake of Covid, unrest and floods, a proposed giant Ferris wheel has become the eye of a public storm
News
2 months ago