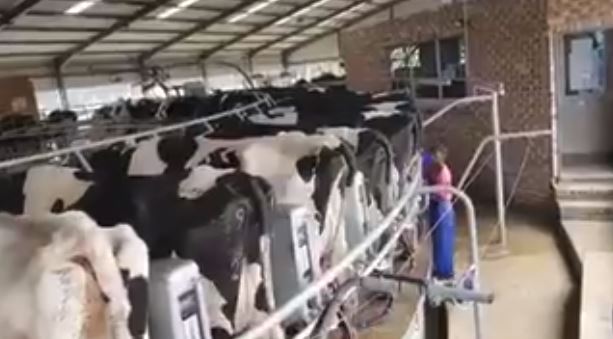 Five people have been arrested in connection with the investigations into the controversial Vrede dairy farm project.

A source close to the investigations told TimesLIVE that two more people were arrested on Wednesday in the Free State.

"They will all be appearing at the Bloemfontein Magistrate's Court tomorrow [Thursday]‚" the source said.

Their arrests come after three people - including one of the Gupta brothers and a business associate - were arrested early on Wednesday morning.

The Guptas and government hijacked my dairy farm idea. This is the gist of a claim by a South African businessman who was jailed in Dubai for more ...
News
4 years ago

On Wednesday morning‚ the Hawks swooped on the Gupta family at their compound in Saxonwold.

They blocked off the road in the elite Johannesburg suburb.

About 15 cars and a strong police contingent could be seen outside the compound.

The Hawks were later seen driving out in flashy cars believed to belong to the family.

Hawks spokesperson Hangwani Mulaudzi said the arrests were part of an ongoing operation.

"We are expecting more arrests."

Saxonwold residents hailed the arrests saying they were pleased the law has finally taken its course.

"The proliferation of the Gupta compound has had residents up in arms. In recent years they have blocked out the gates‚ but before you could see government officials coming in‚" said Saxonwold resident Richard Bottger.

"To see the Hawks here is really encouraging. This is showing the electorate that there is a positive change coming."

The Vrede Dairy Farm is alive and very well. I personally took this video. A world class facility. pic.twitter.com/bRuwXF3hrx

"This is fantastic‚ it feels like real change is happening in South Africa and it’s positive for all of us. These guys were merely here to rape South Africa. This shows real progress. Things are really happening‚" Bottger said.

Another resident Brownyn Coppeller said: "I feel an enormous sense of relief that it's finally happened …there's a palpable feeling of celebration.

“But at the same time‚ I feel angry that it has taken so long. The damage has been and done and you wonder if everything will be put back together again‚ the same way that is was."

She says she has been living in the area for 20 years and has seen a number of cars belonging to government officials driving in and out of the compound.

The Sunday Times reported in January that investigators in the state capture corruption cases have discovered that money was allegedly laundered through Estina for the benefit of the Guptas‚ their associates and companies. The alleged laundered money was used to buy the family’s Bombardier Global 6000 private jet with tail registration ZS-OAK and a fleet of cars.

WATCH | Explainer: How the Guptas 'looted' the dairy farm

Estina‚ the company that ran the Gupta-linked Vrede Dairy Farm Project, had only R9‚000 in its bank account before the first payment of R34-million ...
News
4 years ago

A preservation order obtained by the Asset Forfeiture Unit of the National Prosecuting Authority in the High Court in Bloemfontein this week reveals that Atul received the money despite not having any interest in the project or providing any farming-related services.

The order‚ seen by the Sunday Times‚ also reveals how the Guptas and their business associates became beneficiaries of the lion’s share of R220-million paid by the Free State agriculture department to the company‚ Estina‚ in a project meant to benefit the poor.

This is the second preservation order obtained by the AFU‚ after the McKinsey and Trillian order granted earlier.

According to the newspaper‚ investigators in the state capture corruption cases have discovered that money was allegedly laundered through Estina for the benefit of the Guptas‚ their associates and companies.

Police Minister Fikile Mbalula said on February 14 2018 that the police had to work without fear or favour, in reaction to the reports of Gupta-related arrests made by the Hawks earlier in the day.