Small parties threaten to 'call our masses' over election protest 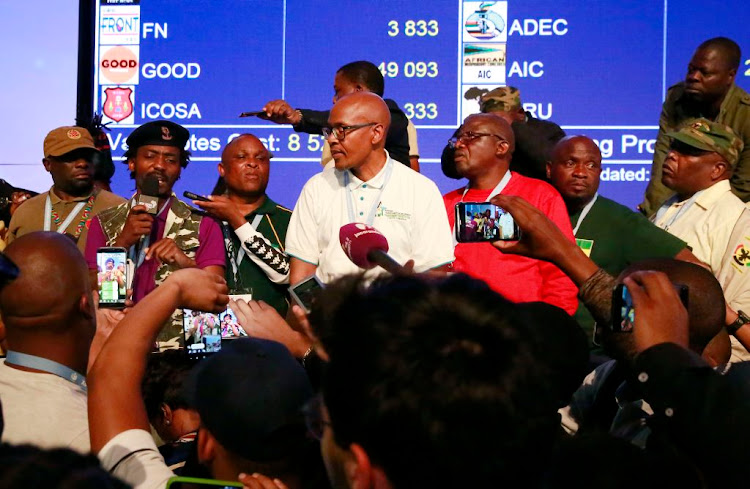 Smaller opposition parties demonstrated at the Results Operation Centre in Tshwane on May 9 2019. The parties, led by ATM's Mzwanele Manyi, are disputing the credibility of the results and are calling for a re-run.
Image: Sebabatso Mosamo/Sunday Times

The parties, most of which have not as yet garnered enough support to afford them a seat in parliament, say they want an independent audit of all the election results and an acknowledgement by the international community that the election process was not free and fair.

This comes in the light of multiple irregularities which resulted in alleged voter fraud - most of which have centred on the IEC's indelible ink that could be washed off, resulting in instances where some people allegedly voted more than once.

It's official: DA has comfortably won the Western Cape

The DA has retained the power to govern the Western Cape with a reduced majority of 55.58%.
Politics
3 years ago

During a media briefing on Friday, members of the different parties claimed they were not a "disgruntled" group.

The ACM's Romeo Ramuada said the IEC was "ducking and diving" at meetings of the party liaison committee.

"This election is not fair and transparent. The IEC has admitted in these PLC meetings that there have been irregularities and some people have been arrested already. We have been threatened by the IEC, they've brought in a judge and we are telling the same judge that we are not going to be intimidated," he said.

"We are here representing our people who have been calling us day in and day out questioning the results. We are demanding the IEC bring us an independent auditor to audit these results and we want all political parties to be part of that process.

The Economic Freedom Fighters said they will not join smaller political parties in calling for a re-run of the 2019 electoral processes.
Politics
3 years ago

"We are not worried about the numbers on the board because those numbers don't represent the views of the people. If it comes to push we are going to call our masses to come here and protest for free and fair elections," he added.

Daniel Lotter, leader of the Front National party, said the figures tabled by the IEC thus far in some cases do not represent some of the party's enrolled membership. "It is a question of moral decency in allowing the people of our country a decent and a fair election. We have all seen various examples of irregularities," he said.

"When we get to the point that the figures on the board represent less than your enrolled membership, where you as a political party leader know full well where you have voted, and when you look at that voting district it shows a zero for your party."

Congress of the People member Dennis Bloem said the ANC was trying to make South Africa a "banana republic".

"We want to make it very clear that we are not a disgruntled group; we are raising very legitimate question marks about the process … Our demands are clearly spelt out," he said. "We are not going to allow a situation where a ruling party is going to make this country a banana republic."

Opposition parties raised their concerns regarding the eligibility of the 2019 election as well as the media coverage of their campaigns.

Mmusi Maimane not worried about his job despite poor election performance

DA leader Mmusi Maimane says he is not worried that the DA's failure to significantly increase its support in this year's elections will cost him is ...
Politics
3 years ago

ANC in trouble in Gauteng as support falls below 50%

The ANC in Gauteng on Friday morning saw its electoral support in the country's economic hub dropping to below the 50% mark after just under 60% of ...
Politics
3 years ago

Five must-watch videos from the 2019 elections

From the many faces of President Cyril Ramaphosa to the double-voting claims, election day was LIT and political parties pulled out all the stops.
Politics
3 years ago