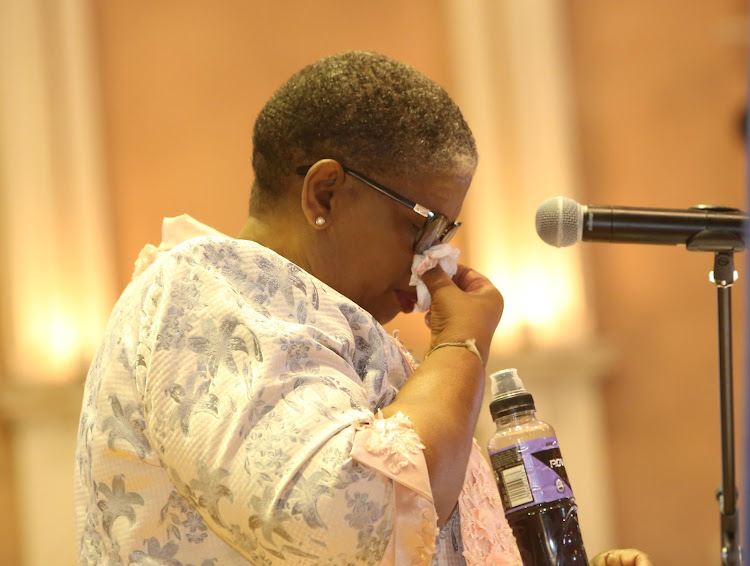 Durban mayor Zandile Gumede, who has been given a 30-day leave of absence after being charged in connection with the R208m Durban Solid Waste tender awarded in 2016
Image: Jackie Clausen

The Organisation Undoing Tax Abuse (Outa) has warned it could take legal action against the eThekwini municipality if does not act against mayor Zandile Gumede and councillor Mondli Mthembu, who are both facing charges relating to the R208m Durban Solid Waste tender scandal.

Outa KZN provincial manager Tim Tyrrell said in a statement on Tuesday they had written to the city's executive committee members on Monday informing them that if they did not act, it would amount to a "dereliction of duty and Outa reserves the right to approach and exercise its rights in all legal forum for the community's best interests to prevail".

"The lack of any form of oversight undertaking by the eThekwini metro against criminally charged mayor Zandile Gumede and her co-accused, is an insult to the city residents and if action is not taken soon Outa will explore legal recourse to hold the eThekwini council to account," said Tyrrell.

It was business as usual for Durban’s acting mayor Fawzia Peer on Friday following an alleged poison scare at a drama-filled full council sitting the ...
News
3 years ago

Gumede, who is also the ANC's eThekwini regional secretary, and Mthembu are out on R50,000 bail each after being charged in connection with the R208m Durban Solid Waste contract awarded in 2016.

Gumede, Mthembu and 10 other suspects are due back in court on August 8.

Last month the KwaZulu-Natal ANC's provincial executive committee asked Gumede to take leave of absence for 30 days which she reluctantly did. Her lawyers did not agree with it as the police investigation against her was still not complete.

Since then, her disgruntled supporters have mounted a series of demonstrations, calling for her reinstatement.

Tyrrell said there was a substantial body of evidence which suggested that Gumede and Mthembu had breached the code of conduct for councillors as set out in the municipal systems act.

"The speaker and the council have a legislative duty to act in the best interest of the community, which includes but is not limited to, taking appropriate steps against councillors and officials suspected of unethical and improper conduct," he said.

The ANC in KwaZulu-Natal wants embattled eThekwini mayor Zandile Gumede to publicly distance herself from her unruly supporters, who are calling ...
News
3 years ago

He said the body of evidence included the charge sheet filed with the Durban Specialised Commercial Crimes Court implicating Gumede, Mthembu and the remaining 10 accused for their role in a R208m tender irregularity; a supporting affidavit by the Hawks investigating officer Lt-Col Ngoako Mphaki; and an internal confidential report which the city manager has access to, compiled by the head of the city integrity and investigations unit that led to the criminal investigation.

Tyrrell said Outa had found at least four instances of a possible breach of the councillors' code of conduct by Gumede and Mthembu.

Outa had also written to eThekwini speaker William Mapena in May reminding him of the council's legislative duty.

Tyrrell said Mapena had responded, saying he did not possess information against Gumede upon which a "reasonable suspicion can be formed that there has been a breach of the code of conduct for councillors or otherwise any legal duty or standard".

The eThekwini municipality has warned residents of a group of alleged scammers who claim to be fundraising on behalf of mayor Zandile Gumede, who is ...
News
3 years ago

"In taking steps the council must also take the public into account as to what course of oversight it has or will implement for all those implicated and reaffirm the community that it has their best interest at heart," said Tyrrell.

eThekwini municipality spokesperson Msawakhe Mayisela said: "We would like to appeal to Outa to appreciate the fact that this matter is before the court of law and as a result,  the city appeals to everyone having interest in this matter to allow the law to take its course."

"eThekwini subscribes to the rule of law and under no circumstances shall it undermine legal prescripts that governs this sphere of government. We also uphold the principle of innocent until proven to the contrary by the court of law," Mayisela said.

"We will forever be open to any engagement with civil society on any matter because it is indispensable in our endeavour to grow our country. To us, the most important is that nothing has distracted the city in living up to its constitutional mandate which is to provide basic services to all its stakeholders unceasingly."

The eThekwini municipality’s full council sitting was disrupted by a near-scuffle on Thursday.
Politics
3 years ago

ANC KwaZulu-Natal chair Sihle Zikalala and his provincial executive are trying to quell a brewing revolt against President Cyril Ramaphosa.
News
3 years ago

The ANC in KwaZulu-Natal has admitted that it took a long time to act against embattled eThekwini mayor Zandile Gumede over her arrest in connection ...
Politics
3 years ago