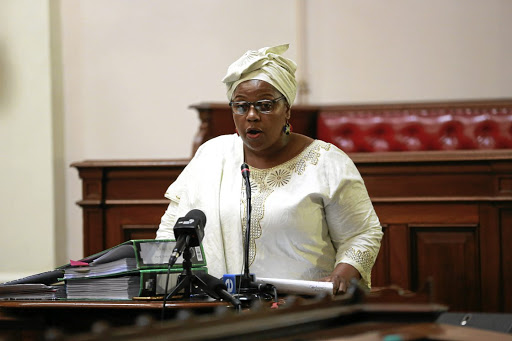 Former SAA board chairperson Dudu Myeni followed in the footsteps of her close ally, former president Jacob Zuma, and decided to show the state capture inquiry the middle finger on Tuesday.

Myeni was supposed to appear at the inquiry after being served with a summons.

However, like Zuma, Myeni decided to not comply with the summons, instead sending her lawyers led by advocate Nqabayethu Buthelezi to seek a postponement of the hearing of her evidence.

This did not go down well with the inquiry’s chairperson, deputy chief justice Raymond Zondo, who instructed the inquiry secretary to lay a criminal charge against Myeni.

This will be the second criminal complaint the inquiry has visited upon Myeni after it did the same last November when she unmasked a witness whose identity was concealed by the inquiry.

Myeni was generally allergic to accountability and something drastic must be done to stop her, said Hofmeyr.

The evidence leader backed her argument on the basis that Myeni had also defied  parliament’s portfolio committee on public enterprises in April 2018.

Myeni was invited to appear before the portfolio committee and account for her SA Airways shenanigans. She, however, elected not to appear and sent an excuse just before her scheduled appearance.

She was then served with a summons which she defied and did not appear.

Her conduct irked the committee, which directed its chairperson to write to speaker Baleka Mbete, informing her that it sought to have a criminal charge laid against Myeni.

Mbete informed the portfolio committee to compile a detailed report for the National Assembly with recommendations about what ought to be done to Myeni.

With that the matter was shoved under the carpet as Myeni successfully evaded accountability.

“Miss Myeni has not appeared today and there is no sufficient cause for that non-appearance. Miss Myeni’s conduct today is part of a pattern of a steadfast resistance to be accountable,” submitted Hofmeyr.

“She effectively took the postponement for herself. It is time for the law to take its course.

“What happened in parliament in 2018 should, with respect, not be repeated. There should be a criminal charge laid against Miss Myeni.”

Myeni has also been implicated at the inquiry for sticking her nose into Eskom affairs when she had no business with the power utility.

Seleka told the inquiry that after they sought her response to the evidence against her on Eskom, Myeni snubbed the inquiry and never responded.

Buthelezi attempted to protest, saying Myeni was not being defiant, but Zondo was having none of it.

The chairperson ordered that a criminal complaint be laid against Myeni, adding that Myeni should avail herself to give testimony virtually at 2pm on Tuesday.

Other political allies of former president Jacob Zuma were also given SAA security protection, the commission into state capture heard on Monday.
Politics
1 year ago

In May, a judge found she was dishonest, reckless and grossly negligent in her conduct as chair of SAA.
News
1 year ago