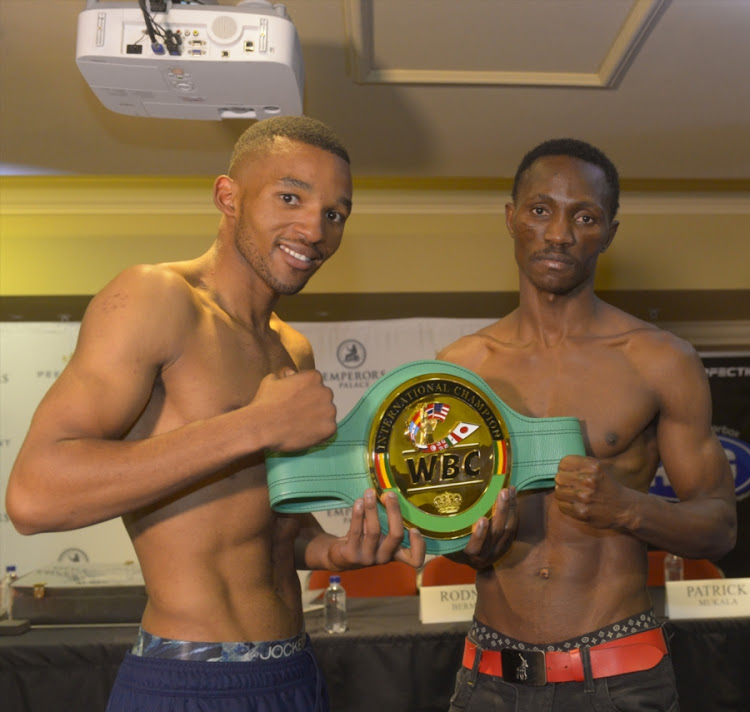 Azinga Fuzile fights on Saturday night and then begins his matric final exams three days later‚ but the East London pupil was in fine bluster on Tuesday insisting he’ll ace both.

Undefeated Fuzile‚ the South African featherweight champion‚ came face to face with Tshifhiwa Munyai‚ his veteran opponent in the Super Four semifinals‚ at the pre-fight medical at Emperors Palace.

Former WBA featherweight world champion Simphiwe Vetyeka takes on Lerato Dlamini in the other eliminator‚ with the winners facing off for the WBC’s stepping stone International title in February.

Fuzile and Vetyeka hail from Duncan Village in the Eastern Cape.

At 21‚ Fuzile is the youngest of the four and has the least experience with his record of eight wins‚ but that didn't stop him from getting vocal.

“I don’t care about Munyai or the fighters he’s faced. I don’t give a damn … You’ve never fought a boxer like me‚” he said.

Munyai‚ 32‚ hit back: “We’ve done our homework‚ boy. For the first time he’s going to meet a real fighter … I’m just going to punish the boy.”

Munyai‚ with a record of 28 victories‚ four defeats and a draw‚ was the lightest of the four on Tuesday‚ weighing 58.52kg — they must beat the 57.15kg featherweight limit at Friday's weigh-in — but he was looking drawn and serious.

Fuzile‚ on the other hand‚ smiled his way through proceedings‚ and later told TimesLIVE he would give the same lip service to Vetyeka if they were to meet in the Super Four final in February.

“Ja‚ it’s business. It’s not a personal thing. People are already talking about the final — me and Vetyeka‚” he said.

“They already know I’m going to win this fight‚” added the youngster‚ who refuses to get a cellphone because he doesn’t want to be disturbed.

Asked if he was more nervous for the fight or his matric finals‚ starting with English on Tuesday‚ Fuzile replied: “I’m balancing the fight and the exams‚ so I’m good both sides.”

Munyai scoffed at the standard of opponent Fuzile had fought.

“He’s only famous for being a champion at school. I was a champion at 21 but I had finished school‚” said Munyai‚ who lifted the Commonwealth bantamweight crown in 2006 before adding the IBO junior-featherweight belt five years later.

Munyai says he continued training even when he was unable to secure fights‚ which led to some lengthy periods of inactivity — he’s fought just once in the past two years.

“But I think that helped to make my career a bit longer and allow this opportunity to come.”

Boxing SA board member Peter Ngatane said the Super Four winner would get to fight in an eliminator for the WBC's world featherweight crown.

Topping the bill is Ryno Liebenberg‚ dropping down one division to super-middleweight to take on unbeaten Patrick Mukala‚ who has stopped seven of his eight opponents to date.

Deejay Kriel faces Thembelani Okolo in the fourth bout of the night.

Inactive ex-champion Vetyeka says if hunger is a motivator, he's got enough to see off lethal challenger.
Sport
4 years ago

Mark “ThinkerBell” Farah – who went down on one knee and proposed to his girlfriend inside a boxing ring in Boksburg on her birthday last month – has ...
Sport
4 years ago

Promoter Rodney Berman heads to the World Boxing Council (WBC) convention in Azerbaijan on Thursday looking to secure another title crack for Hekkie ...
Sport
4 years ago

National broadcaster SABC has angered boxers‚ trainers‚ promoters and even Boxing SA (BSA) officials by delaying its decision on which of three ...
Sport
4 years ago