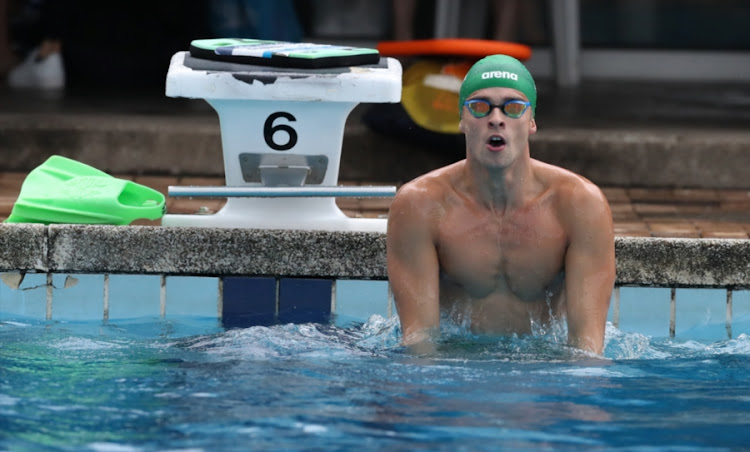 Ayrton Sweeney, who landed his third qualifying time on the final day of the Commonwealth Games trials in Durban on Thursday, has been among the toppies defying the myth that swimming is a youngster’s game.

Sweeney and Baxter had already secured two qualifying times each for Gold Coast 2018 from April 4-15, but Fair was the last addition to the list of qualifiers, taking the total to 29.

Fifteen-year-old Pretoria schoolgirl Duné Coetzee, a better fit for the swimming stereotype, knocked off her third qualifying time on Thursday as she broke the five-year-old age-group 400m freestyle record by more than a second as she posted 4min 14.53sec

By comparison, Sweeney, Brad Tandy, 26, and a couple others like 22-year-old Ryan Coetzee are all late bloomers, flourishing in their twenties, at least in terms of qualifying for senior teams.

Sweeney, also a part-time model, is one of the country’s rare Commonwealth medal hopes outside of Cameron van der Burgh and Chad Le Clos, being ranked third in the 400m individual medley and fifth in the 200m breaststroke.

Yet when he was 15 he didn’t even know what a podium looked like.

“I didn’t have an age-group record, I collected finals ribbons, that was my goal,” he said referring to the ribbons that were awarded to all finalists at age-group galas.

Sweeney, originally from Sea Point in Cape Town, achieved his first medal at a national age-group gala when he was 17. “It was a bronze and I was happy with that.”

He believes the key to his longevity was not taking the sport too seriously while growing up. “From eight to 14 I had fun. I didn’t do the hard graft.

“I didn’t miss anything for swimming, I went to the birthday parties and the school camps.”

But equally he was inspired watching the likes of Roland Schoeman, Ryk Neethling and even Cameron van der Burgh at the Olympics, and he knew that he wanted to go to a Games one day.

In late 2013 Sweeney moved to Graham Hill’s squad in Pinetown outside Durban and in 2015 he qualified for the world championships in Russia.

But then he broke his right elbow in a freak accident, tripping over a guy rope outside a marquee at a friend’s party.

After failing to qualify for the Rio Olympics, he took a couple of months off. “I realised my goal is to enjoy swimming. I don’t swim for times or medals. I swim because I want to.”

Sweeney was back in the national swimming squad for the 2017 world championships in July.

Since then he picked up silverware on the World Cup short-course series, boosting his confidence and his pocket, earning prize money for the first time.

Now he’s on track for his first long-course medal at an international meet.

“I want to medal at Commonwealth Games, seeing where I am in the 400m IM and 200m breast. I don’t want to just go there,” said Sweeney.

So he actually does want good times and medals, but he just wants to have fun doing it.

Swimming qualifying times does not guarantee selection by the SA Sports Confederation and Olympic Committee (Sascoc).

The full list of swimmers who achieved qualifying times is:

A total of 23 athletes have met the qualifying criteria set by Athletics SA (ASA) for the Commonwealth Games next year.
Sport
4 years ago

Athletics SA (ASA)‚ the once near-bankrupt federation that is now in the black to the tune of millions‚ announced on Tuesday it would pay R710 000 ...
Sport
4 years ago