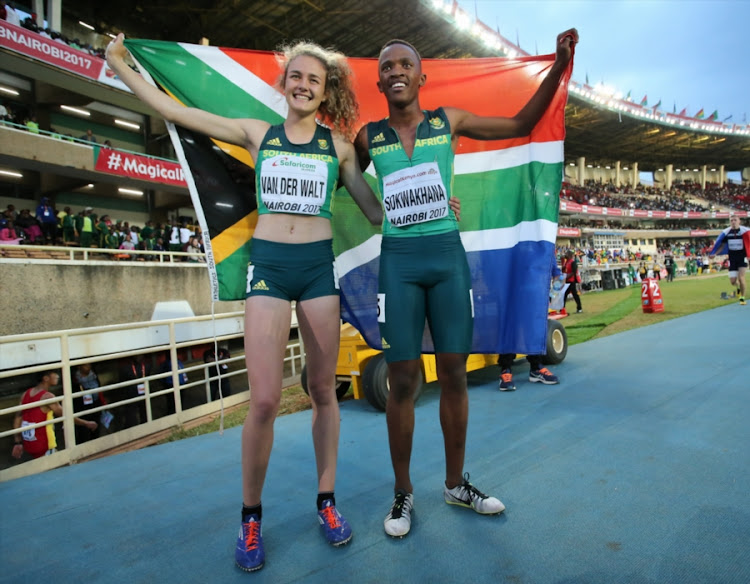 Zeney van der Walt and Zazini Sokwakhana of South Africa hold up the national flag they both won their 400m hurdles finals during day 4 of the IAAF World U18 Championship held at Kasarani Stadium on July 15, 2017 in Nairobi, Kenya.
Image: Roger Sedres/ImageSA/Gallo Images

Athletics SA (ASA) is at it again‚ this time demanding medal-winning performances from some athletes just to make the national team for the 2018 world under-20 championships.

Earlier this year ASA omitted 14 senior athletes who had qualified for the world championships in London in August because they had not met the national federation’s stiff selection criteria.

All 14‚ however‚ had achieved the standards set by the world governing body‚ the IAAF.

To get to the showpiece in Tampere‚ Finland‚ from July 10-15‚ most SA athletes will need to produce efforts that would have made the top eight at the last world junior championships in 2016.

There are even five events where ASA’s standards would have made the podium two years ago:

- Women’s triple jump‚ where ASA’s 13.54m also would have been good enough for third spot.

The standards of no fewer than 12 other events would have been good enough for fourth or fifth place in 2016.

The window period for qualification opened only on October 1‚ and runs until July 2.

ASA on Wednesday named a preparation squad of 29 athletes‚ of whom 24 have produced 33 qualifying performances on the IAAF standards this year.

But only six of them — five men and one woman — matched the tougher ASA standards.

Three of them are world under-18 champions Soks Zazini‚ Zeney van der Walt and Breyton Poole.

Zazini won the title in the 400m hurdles‚ although his ASA time is in the flat 400m.

Poole’s 2.25m effort in the high jump is only 4cm above the ASA cut-off and would have taken silver in 2016.

ASA has argued that tougher standards raise performances‚ but critics believe that widening the pool of international athletes is a better way of nurturing talent and building confidence.

Luvo Manyonga’s remarkable journey from crystal methamphetamine addict to being an Olympic silver medalist has seen him nominated to win the Laureus ...
Sport
4 years ago

WATCH: Wayde van Niekerk breaks it down at his wedding

Athletics sensation Wayde van Niekerk and his gal, Chesney Campbell tied the knot over the weekend surrounded by family and friends.
TshisaLIVE
4 years ago