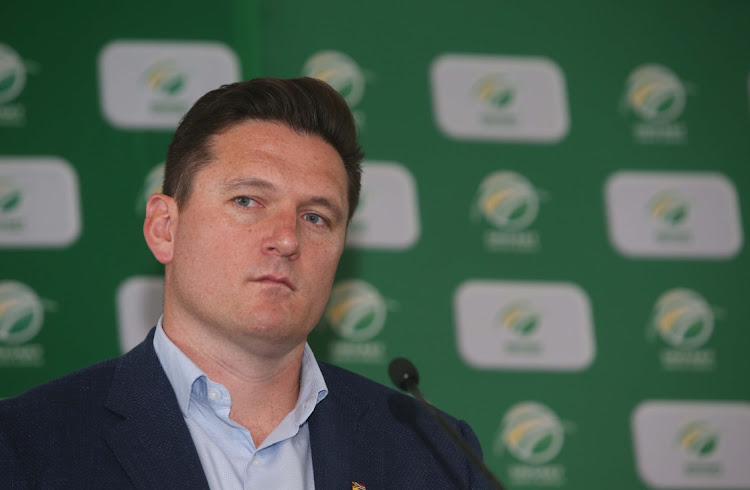 Graeme Smith's appointment as Cricket SA’s (CSA) director of cricket came under the spotlight this week at the organisation’s transformation hearings.

The hearings started on Monday and are part of CSA’s transformation drive — the Social Justice and Nation Building (SJN) project — which was established to investigate racial discrimination within the organisation and recommend remedial action.

Smith was appointed director of cricket in December 2019‚ initially in an acting role‚ and got the job on a full-time basis in April 2020.

Giving testimony on the first day of the transformation public hearings as part of her submissions to the inquiry‚ former board member Dr Eugenia Kula-Ameyaw presented a 17-page document which alleged the process to appoint Smith was flawed.

“The contract between CSA and Smith has no signature date and was signed on behalf of CSA by the acting CEO Jacques Faul.

But Faul told TimesLIVE he can’t remember if the company secretary Welsh Gwaza had to countersign the contract or not.

“I can’t remember if he needed to co-sign it. It is usually not a requirement for a company secretary to sign but I cannot recall if it was the case with Smith‚” said Faul.

As Cricket SA tackles issues around discrimination‚ racism and transformation‚ fresh attention is being given to the salary disparities that are ...
Sport
1 year ago

Gwaza‚ who was suspended in December on various charges‚ including gross insubordination and breaches of the Companies Act‚ was subsequently dismissed last month.

According to the dossier‚ Smith was interviewed with three other candidates‚ who made presentations‚ and was the second candidate to be interviewed on that day on November 8.

But the former Proteas captain Smith was the only one that did not do a presentation.

“The panel‚ in their deliberation‚ all felt that there was a level of disrespect and arrogance on the part of Smith ... and tabled their concerns regarding Smith’s shortcomings‚” reads the document.

The document shows that Smith was preferred over the other three candidates largely based on his commercial influence and cricketing background.

In another startling revelation‚ Kula-Ameyaw alleged that Smith’s annual salary was hiked from an approved R4m to R5.4m‚ apparently without a board resolution.

“[The] R4m was agreed upon. There is no board resolution and no-one remembers who approved the R5.4m‚” said Kula-Ameyaw.

“But if it was a black person who wasn't following processes‚ it would have made the headlines and gone for a forensic investigation.”

Faul‚ however‚ claimed there was a contract for Smith’s consideration and that the former captain was approached by CSA.

“There were discussions on his salary for the extended contract but at the end the board approved his salary and I did not attend that meeting.

“The interview panel must have been done by Chantel Moon (former head of HR) or Thabang Moroe.

“I was informed by (then board chairperson) Chris Nenzani that he (Smith) should sign the contract. It was only for three months‚” said Faul.

Insiders in cricket have described Graeme Smith and Haroon Lorgat as Cricket SA “blue-eyed boys” and alleged that the indefinite postponement of the ...
Sport
1 year ago

The document presented by Kula-Ameyaw cautioned that there may have been a lapse in governance in Smith’s salary hike.

It details how Smith turned down an annual R3m that was offered to him initially and how CSA came back with an improved draft package of R4m.

The approved R4m contract was shared with Smith on November 25 in 2019 and was approved at a special meeting via round robin resolution of the remuneration committee.

Erstwhile CEO Moroe was suspended on December 6 and Faul replaced him in an acting capacity the following day.

Three days later on December 10‚ Faul‚ as acting CEO‚ sent an email to the executive management team with Smith’s contract that had a new amount of R5.4m‚ with several clauses that were in the previous draft removed.

But Faul said he was not involved in the salary negotiations.

“I did not negotiate with him on his (Smith) salary‚ this was done prior to my appointment‚” said Faul.

“I was also not involved in the interview process.

“I dealt with his draft contract for his extended contract but was not part of the final discussion. The salary must have been discussed before my appointment.

“The board considered his contract and approved it‚ as I was not part of the final meeting‚ I cannot answer on their behalf why they approved the salary.”

On the same day, December 10, then-board chairperson Nenzani apparently told HR that he was happy with the contract‚ but critical aspects such as key performance indicators were deleted.

“There is no record of the remuneration of R5.4m awarded to Smith having been tabled before the board or Remco for approval‚” reads the document which was presented as evidence at the hearings.

The hike‚ according to the document‚ creates an imbalance in the CSA remuneration structure‚ as it means that Smith now earns 35% more than his superior‚ the CSA CEO.

Smith’s legal representative‚ David Becker‚ read a WhatsApp text sent to him seeking comment but did not respond by the time of publishing.

CSA have said they will not respond to individual testimonies and will provide a comprehensive report.

Lawson Naidoo was elected as the new Cricket South Africa (CSA) majority independent board chairperson on Tuesday.
Sport
1 year ago

Cricket SA (CSA) ushered in a new era of local sport yesterday, breathing life into a first majority independent board, but they still couldn't ...
Sport
1 year ago

The ombudsman for Cricket South Africa’s (CSA) SJN transformation project advocate Dumisa Ntsebeza has detailed how the organisation’s interim board ...
Sport
1 year ago