Injury rules Oosthuizen out of the Springbok's European tour 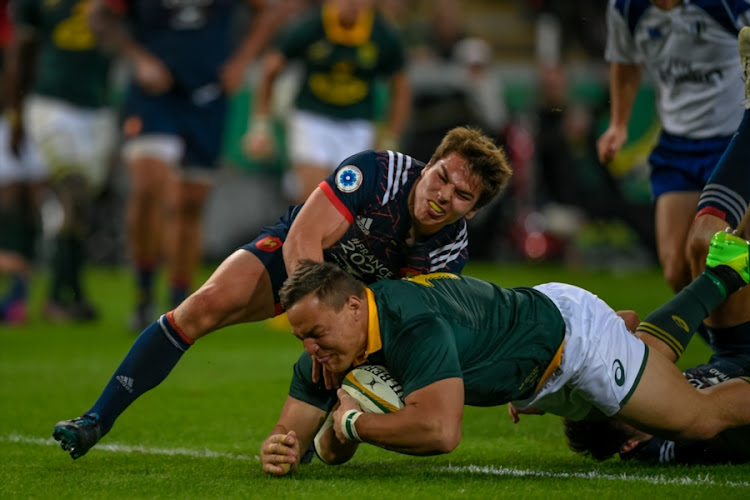 Coenie Oosthuizen is out of the Springbok's European tour‚ while Pieter-Steph du Toit is in doubt for Saturday's Test against France.

The retreaded tighthead lasted just two minutes upon his return to the Bok team that played Ireland before he was transported off the field with a knee injury.

Oosthuizen will first undergo a scan in Dublin before flying home to Durban.

Oosthuizen left the field in the opening stages of the match and was replaced by Wilco Louw.

Bok management said a decision on a replacement will be made shortly.

The injury will come as a hammer blow to Oosthuizen who has had his fair share of injury induced trauma. He was sidelined with a neck injury in 2015.

He last injury came in September when he broke an arm in the drawn Test against the Wallabies in Perth.

Loose forward Du Toit sustained concussion in the closing minutes of the match and he will be managed accordingly in the coming week.

The brevity of Oosthuizen's end of season tour was not dissimilar to the misfortune that befell Jean de Villiers when he debuted against France in Marseille in 2002.

De Villiers was on the field for six minutes before he departed the scene with the first of several injuries he sustained while on national duty.

Springbok coach Allister Coetzee says his side must learn from their Dublin experience.

“We lacked patience in our build up and got off to a terrible start when we lost Coenie Oosthuizen in the first minute of the game‚ and then conceded two penalties at the set piece.

“We must now focus on France and work hard in the coming week to rectify things.”

The Springboks travelled to Paris on Sunday.