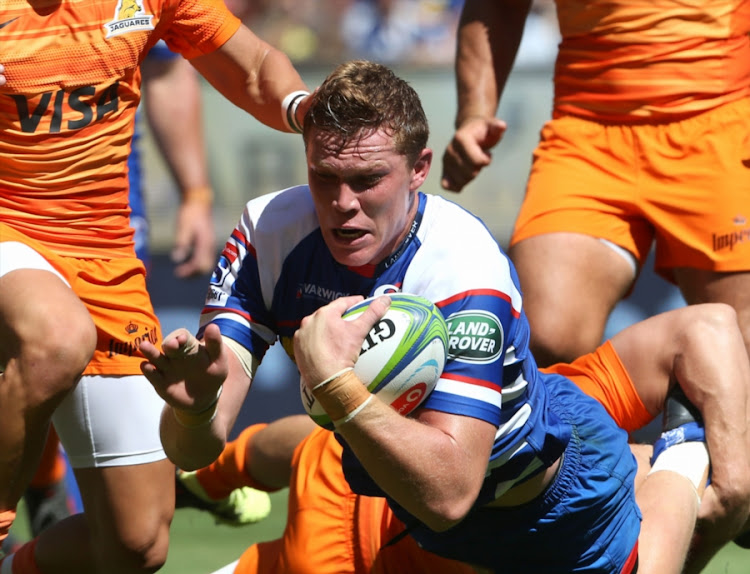 Cobus Wiese of the Stormers during the Super Rugby match against the Jaguares at DHL Newlands Stadium on February 17, 2018 in Cape Town, South Africa.
Image: Carl Fourie/Gallo Images

Former Springbok great Juan Smith would be a strong candidate for a list of the top five SA players since readmission‚ so it’s no wonder that Stormers flank Cobus Wiese wants to be like him.

Wiese‚ 20‚ made a positive start to his Super Rugby career in 2017 and has carried that promise over into 2018.

His display of mountainous physicality and skill against the Jaguares last week had more than an echo of Smith about it.

Wiese made 14 tackles‚ carried the ball for nearly 40 metres in close contact‚ took three lineouts and made a couple of tackle and line breaks.

At 1.97m and 105kg‚ he has the physique to play the big ball-carrying role‚ but he marries that job with good hands and awareness.

It may be too early to become overly carried away by comparisons to Smith‚ a man who played 70 Tests‚ won a World Cup‚ a Tri-Nations and a British & Irish Lions series‚ but an inkling of excitement is allowed.

“The role I’m asked to play at the Stormers fits exactly into my natural game‚” Wiese said.

“It especially helps with the calibre of players I have around me‚ which gives me confidence to carry the ball knowing they will back me up.

“I’ve always been one for getting stuck in and given that role at the Stormers is really enjoyable. I’m looking forward to seeing how we go on this path.

“I try to model my game on Juan Smith. In my opinion he was a true great. The way he played and threw his body around‚ I can relate to that.

“He came from a smaller union and made it in the big time [Wiese hails from Upington and played Craven Week for Griquas Country Districts].

"His physicality in both defence and attack was incredible‚ which is why I try to model myself on him.”

There had been a suggestion that lock Pieter-Steph du Toit might play blindside for the Stormers this season.

It’s a role Du Toit has played at Test level and one he has performed well in for the most part.

But Wiese’s emergence means that plan will only be used sparingly.

“So predominantly he’ll play in the second row‚ and only in certain circumstances will he provide another option in the back row.

“He’s a very good No 5 lock‚ he calls the lineouts well‚ and he adds mobility to the pack and that’s what you need.

"It’s the direction things are going these days‚ it’s a very fast game; in my opinion he really is an outstanding lock.”

The Stormers will use their challenging three-match Australasian tour to bond as a team off the field as much as on it‚ according to captain Siya ...
Sport
4 years ago

Stormers coach Robbie Fleck was more relieved than happy with his side’s 28-20 win over the Jaguares at Newlands on Saturday‚ which kicked off their ...
Sport
4 years ago

The Stormers have suffered another setback with the news that hooker Bongi Mbonambi will miss their tour to Australasia.
Sport
4 years ago

A massive scrum by a depleted Stormers pack won the home team a game that should never have been that close to start their Super Rugby campaign on a ...
Sport
4 years ago

Hope on the horizon for the Bulls

The Bulls approach this season’s Super Rugby campaign with renewed hope under new coach John Mitchell after disappointing last year and failing to ...
Sport
4 years ago