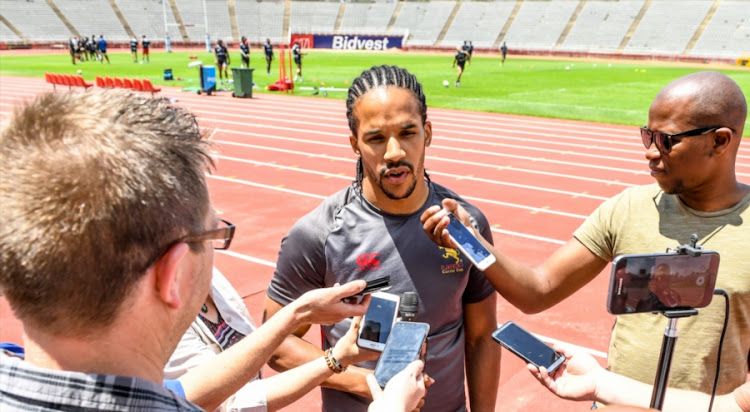 Courtnall Skosan of the Xerox Golden Lions speaks to reporters during a training session at Johannesburg Stadium on October 16, 2018.
Image: Sydney Seshibedi

Golden Lions wing Courtnall Skosan was quite content to bestow the favourites’ tag on the Sharks ahead of their Currie Cup semi-final in Durban on Saturday.

The Sharks finished second on the points table with the Golden Lions one spot below them‚ but perhaps more pertinent to predicting the outcome‚ the coastal side comprehensively outplayed the Johannesburg side in the wet in Durban in the league stages.

“I assume they are the favourites‚” said Skosan.

“We are just going to do what we do. Hopefully we learnt from the mistakes we made against them previously.

“We played in the rain in the second half against the Pumas. I think we’ve prepared very well with a few games in that weather.”

Although he installed the Sharks as favourites‚ Skosan quickly pointed to the vagaries of playing in the knock-out stages.

“Knockout games are funny because you have teams who barely make the knockout (stages) but before you know it they are the champions‚” he said with a mischievous grin.

“It’s always exciting (to play in the semis).

"Knockout games are challenging but that’s where you want to be.

"It is also a big challenge playing away to the Sharks. They’ve had an amazing season.

“Semifinals can be a one-game season.

"It’s about the team (that produces) on the day. Before you know it you can be out‚” Skosan cautioned.

Although the Golden Lions have had some catching up to do this season‚ the wing doesn’t believe they have to deviate from the things that have helped get them to the semi-final.

“With our DNA we are going to stick to what we do‚" he said.

"Stick with our processes and do what we prepared for. If we execute our plan it should go well for us.”

Although speedster Aphiwe Dyantyi is back in the squad and he as a result may have to start off the bench‚ Skosan was delighted to have the Golden Lions’ Boks as company.

“The last three weeks have been amazing for our team‚" he said.

“The team has grown a lot and we could see that against the Pumas.

"Now we are also excited to have the guys back from the Boks to bring that energy in. I think we are in a good space.”