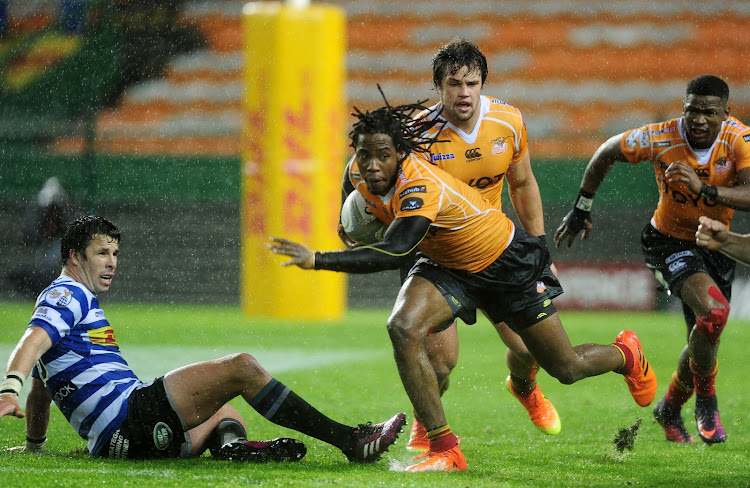 Sibahle Maxwane of the Free State Cheetahs goes past Ruhan Nel of Western Province during the Currie Cup game at the Newlands Rugby Stadium in Cape Town on August 25, 2018.
Image: Ryan Wilkisky/BackpagePix

The Cheetahs will roll up their sleeves and deploy their heavy-ish artillery for their Currie Cup promotion relegation clash against the SWD Eagles next Tuesday.

They’ve welcomed the timing of the clash as they are engaged in European combat in the Pro 14 at home either side of that fixture.

It gives them the opportunity to juggle their resources as they hope to stay afloat in the Premier Division of the Currie Cup.

“The Currie Cup is of utmost importance. We have had a difficult season competing in two demanding competitions simultaneously‚” the Cheetahs said in a statement.

They are enthused by the fact that in the not too distant future the Currie Cup and the Pro 14 will no longer overlap.

They believe they should be able to field a powerful team when the time comes.

Apart from their promotion relegation clash against the Eagles next week‚ the Cheetahs host Cardiff Blues in Bloemfontein on Saturday and Munster a week later.

They have struggled in both competitions as they juggle their responsibilities and players. They have failed to replicate the form they showed in last year’s Pro 14.

They have since lost away matches to Cardiff Blues and Edinburgh 24-21 and 37-21 respectively. They are winless at the bottom of conference A with five points.

In the Currie Cup things didn’t go any better.

They finished bottom of the Premier Division points table after failing to record a win in their six league matches. They only accumulated two log points.

The Cheetahs have called on their supporters to come out in large numbers for their matches against the Blues‚ the Eagles and Munster.

In a marketing gimmick‚ after their game against the Eagles they will give away the match day jerseys to members of the crowd.

They will attempt to do that irrespective the result which may make for awkward scenes should they go down to the Eagles.

Blitzboks star Ruhan Nel‚ who is in line to win a second Currie Cup with Western Province this weekend‚ has praised the old tournament for boosting ...
Sport
3 years ago