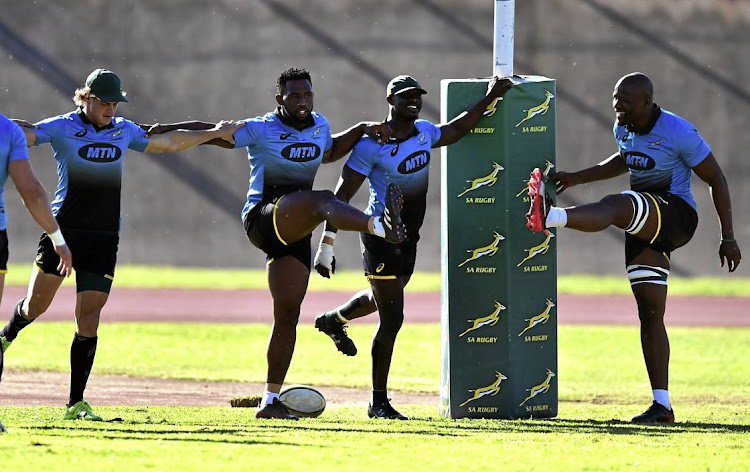 The Springboks practice at the Gelvandale sports grounds on Women's Day, with the stands filled with supporters.
Image: Eugene Coetzee/The Herald

Assessing the 2018 Springbok season purely in terms of results‚ the answer is self-evident – it was a just pass with a 50% winning ratio after seven wins in 14 Tests.

Results are the major currency modern coaches and teams deal in‚ but evaluating a transitional year under a new coach in only those stark terms‚ misses some of the subtleties and nuances of their efforts.

Like all teams under a new coach they needed time to find common ground.

Rassie Erasmus was parachuted into the job after Allister Coetzee was inevitably sacked followed 11 wins in 25 Tests as Bok coach.

But it wasn’t only about defeats‚ but the nature of those losses that made Coetzee’s tenure untenable.

There was certainly no shortage of drama in SA rugby in 2018 and below are some of the controversies that dominated the headlines this year.
Sport
2 years ago

Although Erasmus’ 2018 side lost seven matches‚ four of those defeats were by five points or fewer while they famously won 36-34 in Wellington to become the first national team to beat the All Blacks at home in since the 2009 Boks.

That result alone was enough to dispel any negative thoughts about the Boks’ trajectory in 2018.

They also demolished the All Blacks for 60 minutes at Loftus Versfeld before falling away to allow the world champions an unlikely win.

But the sheer brilliance of that first hour in Pretoria was a window into what Erasmus’ Boks are capable of becoming.

The final 20 minutes however‚ was an indication of how much growing they still have to do.

But in all‚ this was a season of optimism‚ from the emergence of a group of electric newcomers such as wings Aphiwe Dyantyi and Sbu Nkosi‚ lock RG Snyman and centre Lukhanyo Am‚ to the rebirth of stalwarts such as Willie le Roux‚ Faf de Klerk and Handre Pollard.

Erasmus’ decision to make flank Siya Kolisi the Bok skipper was as bold as it was beautiful.

Blitzbok coach Neil Powell used 28 players in 2017/18 as he played a delicate juggling game with his players as they battled three major offensives ...
Sport
2 years ago

Kolisi became the first black Test Bok skipper and is a figure the team and the entire country can rally around and going into a World Cup year. That kind of goodwill and support is invaluable.

Every great team needs not only a respected skipper but also a quality leadership group around him‚ and Erasmus created that too.

The Boks’ results though‚ were inconsistent. But there is a rumbling of something big stirring. It feels like a foundation has been laid and that layers will be placed on top next year.

The Boks pack was immense and there is no side on the planet that will scare the forwards in both the set piece and tight loose.

In every position in the pack there are at least two players capable of producing world-class performances.

Springboks and Lions winger Aphiwe Dyantyi was outstanding this year after delivering breathtaking  performances for club and country.
Sport
2 years ago

Behind the scrum depth is growing but scrumhalf and the perfect centre pairing remain thorny issues.

De Klerk is the best halfback the Boks have‚ but his performances‚ which were immense against England in June‚ tailed off later in the year. Neither Ivan van Zyl‚ nor Embrose Papier took full advantage of their limited chances.

Am’s injury early in the Rugby Championship allowed Jesse Kriel a decent run in the outside centre channel and he had his moments.

But his partnership with Damian de Allende misfired as much as it purred. Jan Serfontein’s return at inside centre could be the missing backline piece.

Dyantyi and Nkosi are lethal finishers and well ahead of the next best. But they were occasionally exposed on defence.

Bok defence coach Jacques Nienaber is not concerned though‚ because he always maintained his defensive blueprint would take more than a season to bed down.

“We are making progress and although we are nowhere near where we want to be‚ we are heading in the right direction‚” Kolisi said.

The Springboks scored some memorable tries during the year and we have listed five of the best below. 5) Sbu Nkosi vs. England, first Test, ...
Sport
2 years ago

“However‚ we have to become more consistent because you cannot win two or three matches and then lose the next few – you have to pitch up for every Test and that’s what we will have to strive for in 2019.”

The Boks’ results underline two things – they were never massively dominant with a 34-21 win over Argentina being their biggest win‚ and they were also never convincingly outplayed.

Although the win ratio says it was a 50% season‚ in reality the Boks scored a solid ‘B’ on their report card with the caveat that they have to raise their winning percentage in 2019.