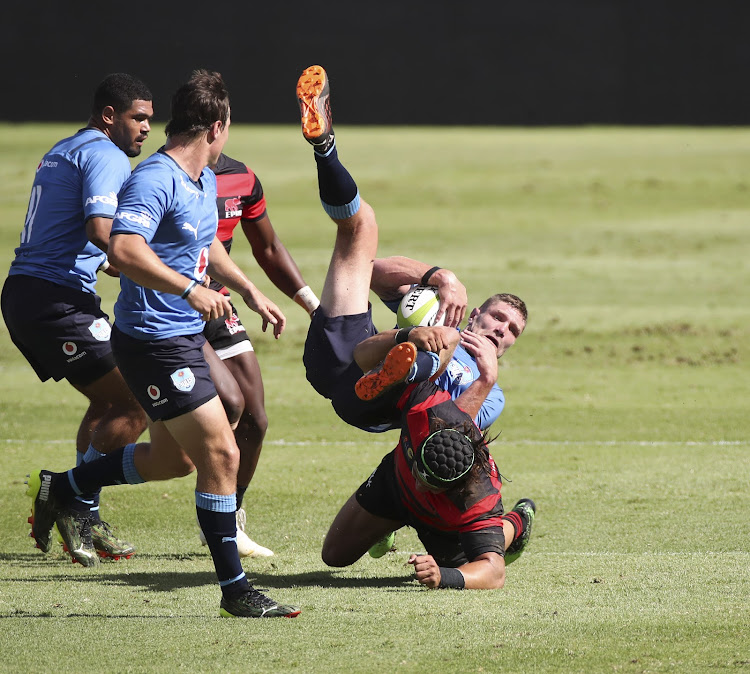 Marco Jansen van Vuren of the Bulls is tackled by Cyril-John Velleman of the EP Elephants during the Preparation Series rugby match at Loftus Stadium in Pretoria on February 28 2021.
Image: Gavin Barker/BackpagePix

The Elephants were left licking their wounds after they were gored 87-10 by a rampant Bulls outfit in a one-sided Preparation Series clash at Loftus on Sunday.

It was a steep learning curve for a young Eastern Province outfit who found the going tough against an experimental Bulls side missing many of their star players.

The Bulls put the game to bed by halftime by running up a commanding 38-3 lead.

It was always going to be a David vs Goliath clash at fortress Loftus where the Bulls have been invincible in recent times.

There was a bright moment in the second half for the Elephants hooker Sithembiso Befile when he scored a consolation try for his outplayed team.

The Bulls swept all before them in the Carling Currie Cup and the Vodacom Super Rugby Unlocked‚ and they continued that trend in their opening Preparation Series match.

The Elephants did not have the luxury of a warm-up match because of Covid protocols and they were clearly struggling at altitude in the latter period of the contest.

The Bulls kept the scoreboard ticking early in the second half when Stravino Jacobs and Tim Agaba scored tries to pile on the misery for the Elephants.

It was the Elephants who put the first points on the board after only a minute when skipper Inny Radebe kicked a penalty which gave his team an early 3-0 advantage.

It proved to be the first and only time they led in the game.

Three minutes later the Bulls hit back with a try from hooker Joe van Zyl who crashed over the visitors' try line after a powerful driving maul.

Bulls flyhalf Chris Smith slotted the conversion to put the home side ahead 7-3.

The Elephants misfiring line-out play was letting them down in the early stages and this hampered their efforts to make headways into the Bulls’ half.

There was a second try for the Bulls after 16 minutes when skipper Nizaam Carr was on hand to touch down after good work by his forward pack.

The Bulls were dominating at scrum time and the resulting penalties awarded by the referee were keeping the Elephants on the back foot.

Relentless pressure from the Bulls took its toll and the home side stretched their lead to 17-3 after 24 minutes.

The Elephants had their best passage of play midway through the first half‚ but they were unable to punch a hole in the resolute Bulls defence.

Loose forward CJ Velleman was in the thick of the action for the Elephants as the visitors attempted to stem the blue machine which was building up a head of steam.

A rampant Bulls side then scored a scintillating team try which was rounded off by fullback David Kriel.

At this stage the Bulls were running rampant and the Elephants' stretched defence was unable to plug the gaps when Carr raced over for his second try to hand his team a 38-3 advantage.

There will not be much time for the Elephants coach Peter de Villiers and his charges to pick up the pieces because they are next in action against the Lions at Nelson Mandela Bay Stadium on March 10.

The Springboks will kick off the defence of their Rugby World Cup crown at the 2023 tournament on Sunday‚ September 10‚ 2023 against Scotland in the ...
Sport
1 year ago

LIAM DEL CARME | Rugby has lost its lustre, but plans are afoot to kick it back into play

From refs speeding up play to broadcasters upping the viewing vibe, let’s hope for an enhanced experience
Sport
1 year ago

Cheetahs down Stormers in Cape Town

On their first day in their new Cape Town Stadium home the Stormers criminally left the back door open resulting in a 34-33 defeat to the Cheetahs.
Sport
1 year ago

They left their old home partly because it is a relic‚ but Western Province will start life at Cape Town Stadium desperate to hold on to some of ...
Sport
1 year ago

Cutting ties: no Super Rugby for SA teams in the foreseeable future

The Stormers will usher in a new era for rugby in Western Province by pushing into battle a team for the future in their preparation game against the ...
Sport
1 year ago