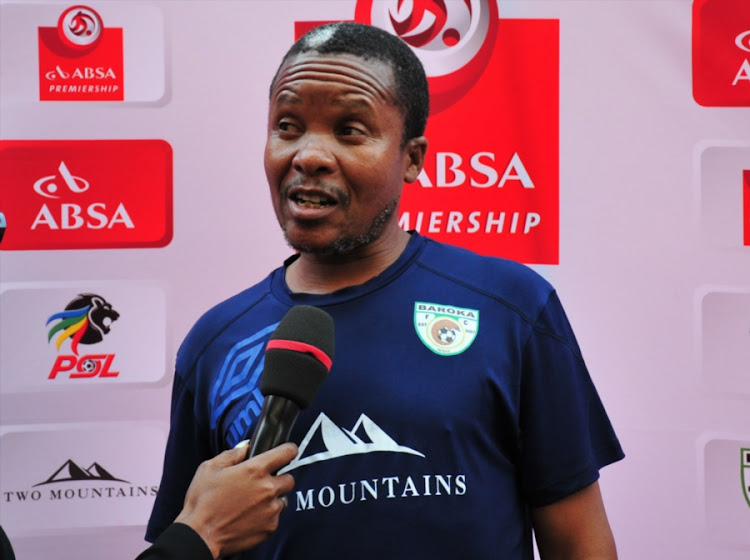 Their unbeaten record in the league was shattered during the 1-0 loss to Bidvest Wits last weekend and Baroka FC coach Kgoloko Thobejane is shifting attention to the Telkom Knockout‚ last 16 clash against Cape Town City at Peter Mokaba Stadium in Polokwane on Sunday.

Not the one to shy away from speaking his mind‚ Thobejane said after the loss to Wits that they will be properly ready for City and it is important for Baroka to be highly competitive in cup competitions.

“We need to lay our hands on silverware‚ we need to win cups because we are in football to compete.

"Come Sunday‚ we must see ourselves going through to the quarter-final stage. We want to take our league form into the cup competition and we will be ready for that challenge‚” he said adding that the loss to Wits was disappointing.

“The loss came because we did not finish off some of the chances that we created‚ but we accept it because we came into this game wanting to extend the gap between us and Arrows.

"Now‚ there is only one point difference between us and Arrows but we are still there at the top of the log‚” he said.

“The game against Wits was not different from the one we drew with Golden Arrows last week Wednesday.

"We created a number of chances but did not convert any of them. At least against Arrows last week we converted one in the 1-1 draw but we remain positive.

"Ours is to keep our heads up and look forward to where we are going because the road is still very long‚” he said.

As he continued to look back at the loss to Wits‚ Thobejane said he was forced to change his tactics and plan for the match because of the injury to influential attacker Lewis Macha as early as the eighth minute.

“It was a huge blow for us because it was very early in the game and it forced us to make some changes but that’s how things go in football and you must be ready for those challenges.

"Gift Motupa came in to try to break the defence but we could not find the answers‚” he said.

SuperSport United coach Eric Tinkler is confident his side can lift the African Confederation Cup this season as they prepare to face DR Congo giants ...
Sport
4 years ago

Chiefs coach Komphela says changes will depend on circumstances

Kaizer Chiefs continued in Saturday’s derby to employ the cautious tactical approach that had characterised much of their season but growing ...
Sport
4 years ago