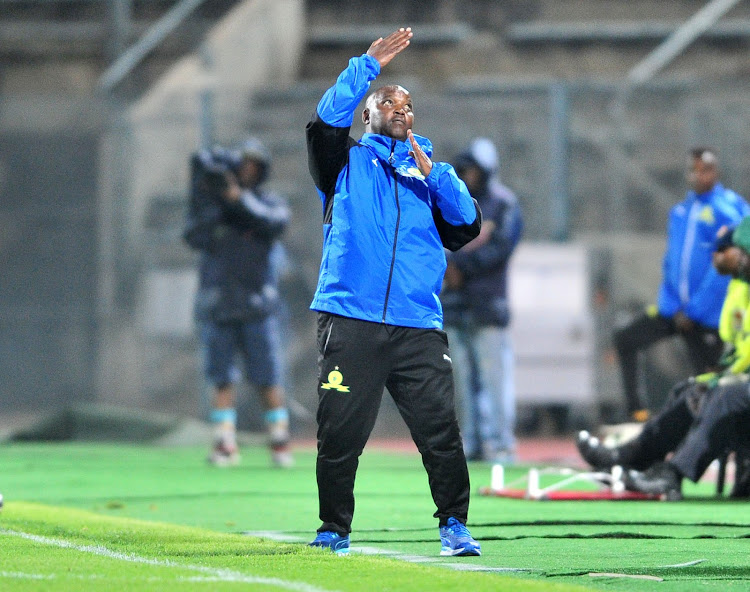 Mamelodi Sundowns coach Pitso Mosimane has heavily slammed senior referee Daniel Bennett and his assistants for poor officiating in their 2-1 loss to AmaZulu on Saturday night which he believes cost them at least a point.

Speaking after the match‚ which was Sundowns’ third loss at home this season‚ Mosimane said AmaZulu’s equaliser through veteran striker Siyabonga Nomvethe in the 80th minute was a metre offside and there were other crucial decisions that could have went their way.

“All these things they create problems‚ when a younger referee makes a mistake everybody goes to him because he is a soft target and they take him out.

"I told you last time against Kaizer Chiefs that no one touches the big boys and it is sad. We lose jobs‚ people get angry‚ our supporters get agitated but what can you do?‚” he asked in frustration.

“Joseph Molangoane played in the derby and we did not have Khama Billiat because he kicked him out of the game and there was no red card for him but that’s life.

"So‚ it’s tough times for Sundowns but when times are like this it reveals too many things and we need to calm down and show leadership.

"We just have to keep playing because we don’t have another alternative.

"You write a letter and then what‚ do you think a person will raise his hand to apologise and say I have made a mistake‚ never.

"Do you think I will sleep at night after something like this‚ but the officials will sleep with a smile on their face because nothing is going to happen.

"The small referee we hammer him and put it in the newspapers‚ when Baroka played Golden Arrows last season and a referee retook the penalty what happened to him‚ nothing. So why do you go to the small referee‚” said Mosimane.

Mosimane said he was not complaining as a way of making excises to losing but he was highlighting something that is a serious problem in the league.

“I sound like I am making excuses because we lost but we lost because of Nomvethe’s goal‚ because of the two penalties they did not give us‚ because they gave off sides which were not off sides.

"We played well and controlled the game but we also missed our own chances. Even on the goal that Nomvethe scored‚ we did not mark on the far post but it does not matter because it was offside.”

“The players are finished in the dressing room‚ we practice attacks over the top every week that it looks like we are off side and they are failing to get it.

"They look off side but they are not‚ I’ll for wait when Sakhele Siwela is around and maybe he will get it because he is the only one who gets it.”

Veteran AmaZulu and former Bafana Bafana striker Siyabonga Nomvethe has credited dedication‚ family stability and living a good lifestyle as some of ...
Sport
3 years ago