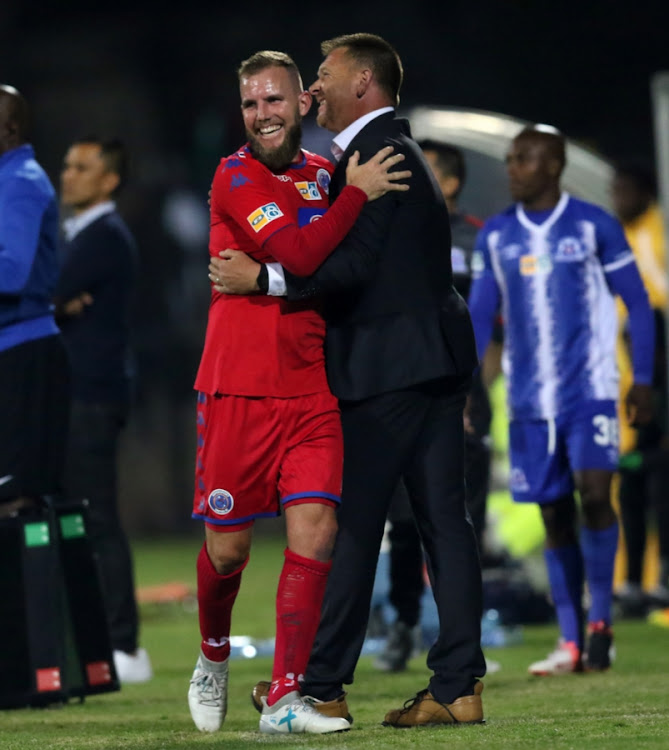 SuperSport United were right to keep Jeremy Brockie for six months‚ Matsatsantsa coach Eric Tinkler has said‚ while denying there had ever been any issues between himself and Mamelodi Sundowns’ new striker.

Brockie finally signed for Sundowns on Monday having been the target of two aggressive attempts to lure the prolific Kiwi away from the Brazilians' Pretoria neighbors‚ most recently in August.

At that time SuperSport CEO Stan Matthews said Brockie would not be allowed to “sulk” his way out of his contract with some distracted early-season performances‚ and that Tinkler intended building his team around the player.

With Brockie having his worst half-season return of just one league goal‚ and having looked notably distracted again as the January transfer window approached‚ Tinkler was asked if SuperSport made the right decision fighting to keep the Kiwi.

“So was it the right decision? Yes‚” Tinkler replied.

He finished clear top scorer with 10 strikes in the 2017 Caf Confederation Cup‚ where SuperSport lost in the final against TP Mazembe‚ though only one of those goals came in the knockout stages‚ after Brockie’s blocked move to Downs.

There has been speculation that Tinkler and his striker did not always gel.

Brockie had complained that the coach often took him off early in matches‚ when the striker said he generally scored a high ratio of goals late in games when defenders were tiring.

“Never. There were never any issues between him and I‚” Tinkler stressed.

“Obviously a footballer wants to play 90 minutes. But I’m the head coach. I make the decisions‚ whether the player likes it or not‚ on whether he continues or not.

“He might feel that he needed to play 90. But at the time I would feel that I needed to make that change.

“But he understood that. We never had any issues.

“And obviously he’s a player who’s done exceptionally well for the club.

“Right at the beginning of the season I spoke to him about the move taking place in December if we achieved our goals.

“And he has served the club very well in the time that he was here. And as a club we obviously wish him all the best now.

“This is probably his last opportunity to really cash in – he’s not a youngster any more.”

Brockie‚ with 54 goals‚ became SuperSport’s second-highest all-time scorer after the late Abram Raselemane (57) after signing for the Pretoria club in December 2014.

The 30-year-old was signed on a five-year contract by Downs‚ just in time for Monday’s Caf Champions league transfer deadline.

Supersport United have agreed to the sale of in-demand striker Jeremy Brockie to Mamelodi Sundowns.
Sport
4 years ago

Cape Town City have moved to secure the future of highly-rated midfielder Thabo Nodada after they handed the youngster a new four-year contract on ...
Sport
4 years ago

Ajax Cape Town coach Muhsin Ertugral was full of praise for striker Tendai Ndoro after his goal on debut helped the side to a crucial 3-1 victory ...
Sport
4 years ago