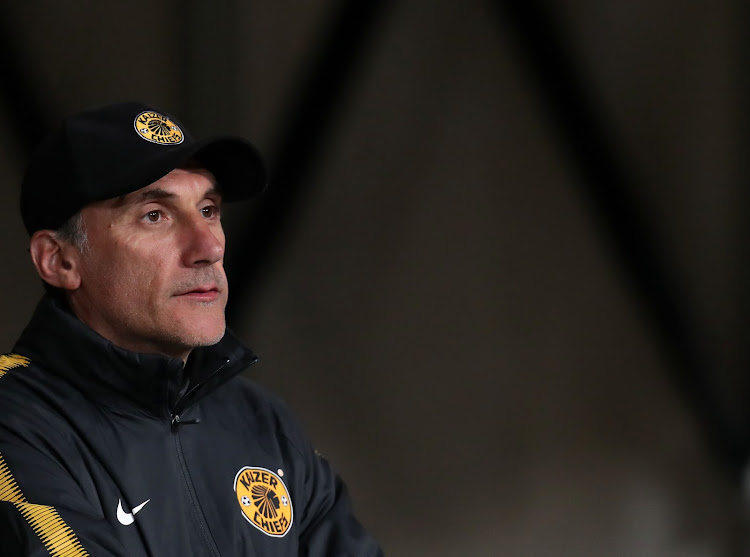 Beleaguered Kaizer Chiefs Italian coach Giovanni Solinas looks on during the 2-0 Absa Premiership defeat at home to Bloemfontein Celtic at the FNB Stadium in the south of Johannesburg on August 29 2018.
Image: Muzi Ntombela/BackpagePix

Kaizer Chiefs will extend their winless run to six games if they do not claim victory away at Cape Town City on Saturday‚ but fans of the ailing Soweto giants have endured this pain before in recent times.

Chiefs have made a difficult start to the new campaign under Italian coach Giovanni Solinas‚ with just a single victory in eight matches and none in their last five.

Confirmation from chairman Kaizer Motaung last week that Solinas was by no means the club’s first choice for the post‚ and that they had rather hoped to bring in their former boss Stuart Baxter or at least two other tacticians instead‚ will not fill Chiefs fans with much confidence either.

But this poor run is nothing new for a side battling to restore former glories and three times in the last two years they have had worse periods.

Chiefs went seven games without a win between March and April 2016‚ part of a run that included just a single victory (against University of Pretoria) in 12 games.

Worse was to follow when the following season they went eight games without a win between October and December 2016‚ before the run was finally broken by a fortunate 3-2 home success over Polokwane City in which Willard Katsande scored an injury-time winner.

That same season the side went six games without a victory between April and May 2017‚ winning their final game of the season at home to Bidvest Wits to break the sequence.

Strangely‚ between those last two winless runs‚ the side played 13 matches‚ won 10 and drew the other three‚ showing excellent form.

A defiant Solinas spoke ahead of the international break about how useful the period would be for him to bed down some of his strategy‚ with the proof in that theory to come at the Cape Town Stadium on Saturday.

“I am here now for only one and a half month. I don’t have a magic wand‚” he told reporters.

“There is‚ however‚ a lot of room for improvement and the FIFA international break will give us some time to work at training on certain aspects of our game.

“I believe in this team and I fully believe that‚ with time‚ we will get it right. I am optimistic about the future. The best of Kaizer Chiefs is coming.”

Chiefs can take some confidence from the fact that they won both matches against City last season‚ including a 2-0 victory in the Mother City.

Kaizer Chiefs boss Kaizer Motaung has confirmed that the club held talks with Bafana Bafana coach Stuart Baxter with a view of luring the Briton back ...
Sport
3 years ago

Kaizer Chiefs boss Kaizer Motaung has conceded that beleaguered coach Giovanni Solinas was not the first choice to succeed Steve Komphela at the ...
Sport
3 years ago