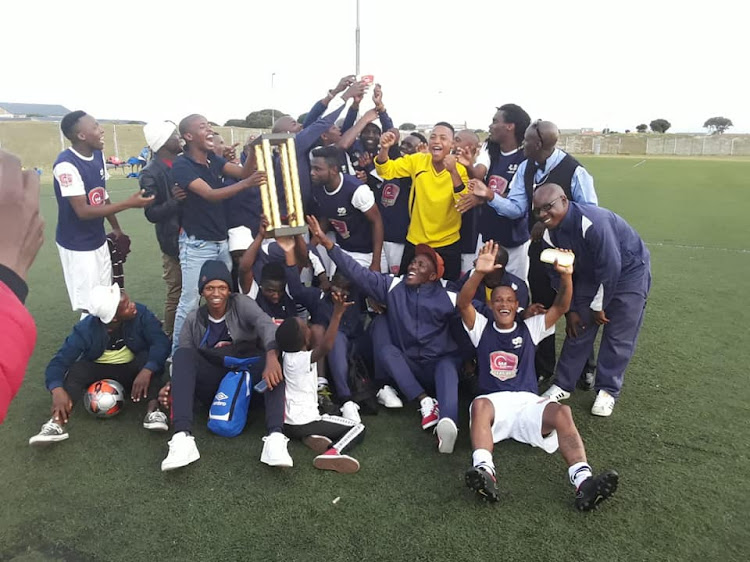 All football clubs release players‚ but when Helderstroom FC do so it takes on a whole new meaning.

That’s because they are the team representing Helderstroom Correctional Service Prison just outside Caledon in the Western Cape‚ who‚ quite remarkably‚ have just won the Safa-Overberg region’s SAB League (fourth division).

Helderstroom‚ comprised of prisoners and a few prison officials‚ will contest the provincial playoffs to the semi-professional ABC Motsepe League (third division) in Beaufort West on June 22 and 23.

They finished 10 points clear of the second-placed team‚ who‚ fascinatingly‚ were the region’s South African Police Services (SAPS) side‚ Police FC.

“It’s like a derby. Very fair‚ but‚ shew‚ it’s crucial‚” Tankiso Modipa‚ president of the South African Football Association’s Overberg region‚ said of when Helderstroom have met Police FC in his league.

Helderstroom’s coach‚ Bhamjee Gontsana (45)‚ was an amateur player in the Cape. He works at the prison’s sport and recreation department.

“It’s an offenders’ team. We started the team about three years back playing in the LFA [Local Football Association] for one season‚” Gontsana explained.

“We came second in our first season in the SAB. In our second season‚ this past campaign‚ we were crowned champions with two or three games to go.

“The team consists mostly of prisoners. There are two prison staff officials who play with the offenders.”

Gontsana said not all prisoners at Helderstroom can qualify to play for the team – participation is incentive-based on good behaviour‚ but also does take into account length of sentences.

Chiefs boss Kaizer Motaung defends son: 'Bobby is not the one who buys players'

Kaizer Chiefs boss Kaizer Motaung has come to his son Bobby's defense and said the much vilified Amakhosi football manager would not be working at ...
Sport
2 years ago

Helderstroom‚ of course‚ have a unique transfer system for a football club.

“I must thank the Safa-Overberg executive‚ especially Mr Modipa. He was the one who sent me to Pretoria to attend a B-licence coaching course‚” Gontsana said.

“When I came back we went to prisons in the Western Cape to look for players‚ and transferred those players to Helderstroom.

“I phoned those prisons and said they should organise a match to play. Then I would go and scout at those matches.

“We got players from Drakenstein Prison in Paarl‚ some of them are from Pollsmoor.”

Gontsana said some prison guards accompany the team to away matches – home games are played at a ground just outside the prison – but they are not overly visible.

Kaizer Chiefs boss Kaizer Motaung has admitted that his club's embarrassing defeat to lower tier side TS Galaxy in the final of the Nedbank Cup in ...
Sport
2 years ago

“It’s not about guards being there wearing uniforms and such‚” he said.

“They are in sport gear‚ just to be there. We don’t have a problem with anyone.”

Modipa‚ a policeman‚ took a special interest in including Helderstroom in his region’s leagues.

“When they started in the LFA I used to encourage them‚ because Bhamjee Gontsana also coached me as a player in about 2005‚” the Overberg president said.

“I used to assist them at the prison when their officials played‚ because I’m a police officer as well.

Willard Katsande has admitted that Kaizer Chiefs’ supporters have a right to be angry and to criticise the team and their players for a woeful ...
Sport
2 years ago

“So when I took over the region and Bhamjee said they had a team of prisoners‚ which they wanted to use as a rehabilitation process – because they already had a rugby team playing in their local league – I talked to the LFA to accommodate them.

“We just checked the precautionary measures on security. But the prison assured me that their team went around the Western Cape playing matches‚ and they would provide their own security.

“One thing I can assure you is that those have been very disciplined players.

"In the entire league you will find some games where there have been some fighting. Those are the most disciplined players in the league.”