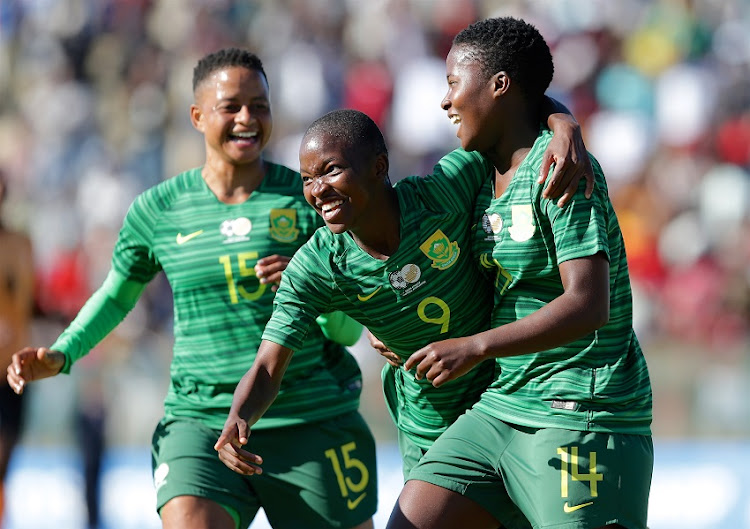 Tiisetso Makhubela scored the only goal of the game as Banyana Banyana claimed a 1-0 victory over Zambia and a hat-trick of COSAFA Women’s Championship titles at a packed Wolfson Stadium in Nelson Mandela Bay on Sunday.

It is the third year in a row that coach Desiree Ellis has led her side to regional success, but this time was achieved without any of her overseas stars, as the likes of Thembi Kgatlana, Linda Motlhalo and Leandra Smeda were all missing due to club duty.

It is the perfect warm-up for the Olympic Games qualifier against Botswana that starts later this month, with Ellis able to blood a number of new names at international level.

The success was deserved for the side, with Banyana comfortably the most accomplished team in the competition, and having also recorded their biggest ever win with a 17-0 hammering of Comoros Islands in their opening match.

It is a sign of the way Banyana have captured the interest of the country following their recent appearance at the FIFA World Cup in France that the stands at the stadium were overflowing, albeit that organisers had made the entrance free.

Zambia offered little resistance, with their main threat coming from former 400-metres sprinter Rachael Nachula, whose explosive pace helped her finish as the leading scorer in the competition with 10 goals.

Banyana were on top from the start as Amanda Mthandi and Busiswe Ndimeni combined well on the right-hand side of the box, with the latter blazing her shot over the bar from 10-yards.

They had the ball in the back of the net on 18 minutes when Ndimeni’s break on the right saw her cross deflect off a Zambian defender and into the path of Noxolo Cesane, who finished at the back post.

The flag was raised by the assistant referee in what appeared a poor decision.

But the home side did have the lead three minutes later as Mamello Makhabane's free-kick was spilled by Zambia goalkeeper Hazel Nali and Makhubela blasted the ball into the empty net for her second international goal.

The dominant Banyana had the ball in the net again from Cesane’s header, but this time it looked the correct call for offside. The stiff wind made conditions difficult for both teams, but it was the home side who continued to dominate possession.

Robyn Moodaly, who recently returned to the national team frame and improved as the tournament went on, went close but saw her shot blocked, while Ndimeni also had an effort that was just over the bar.

Substitute Ode Fulutudilu should have made it 2-0 in the final minute when she went one-on-one with Nali, but put her effort the wrong side of the post.

Ellis has now coached Banyana in 15 matches at the COSAFA Women’s Championship, winning 13 and drawing the other two.