Stadium designers suggest suites and boxes to be used as ICU units with a minimum two beds for severe cases. 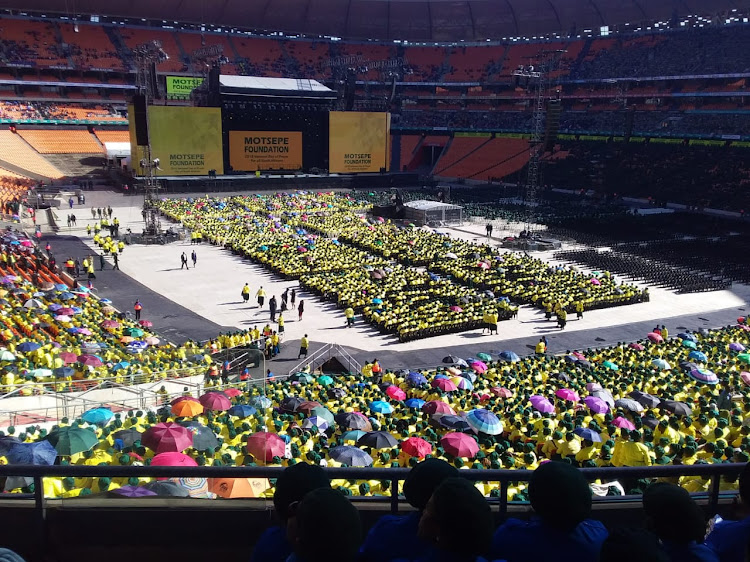 FNB stadium fills up for a national prayer day organised by the Motsepe Foundation in 2019. The 94,000 seater 2010 World Cup venue will be converted into a hospital during the coronavirus crisis.
Image: Nonkululeko Njilo

FNB Stadium is on standby to serve as a field hospital to treat Covid-19 patients‚ once it gets the go-ahead on such a proposal from the government.

Bertie Grobbelaar‚ managing director of Stadium Management SA (SMSA)‚ told TimesLIVE on Wednesday that the company that manages the 94‚000-seat FNB Stadium has sent a proposal to the government for the 2010 World Cup final venue to be utilised as a coronavirus treatment centre and is awaiting a response.

Grobbelaar said he was not part of a design proposal for FNB to be turned into a 1‚500-bed ICU treatment hospital by the architects who oversaw the stadium’s redesign from 2006 ahead of the 2010 World Cup‚ Boogertman + Partners Architects.

The architects behind the stadium design‚ and hospital redesign proposal‚ Bob van Bebber and Jean Grobler‚ told BizNews.com’s Alec Hogg on a podcast that‚ at a cost of potentially R750m to R1-billion‚ they hope that the curve of cases of Covid-19 remains flattened so they “don’t have to execute on this”.

FNB Stadium architect Van Bebber told Hogg: “The purpose of our proposal is to be ready‚ to know that it is possible‚ and to empower our health department and government to make those decisions.”

Grobbelaar sent a letter to SMSA staff on Wednesday informing them that media reports that FNB will be turned into a field hospital are “factually incorrect”‚ but also informing them to be on standby for such an eventuality.

“Although we offered the utilisation of the FNB Stadium as a temporary hospital and / or quarantine facility to the Department of Public Works‚ as to date no such agreement is concluded with SMSA‚ neither were we formally approached by the authorised entity on the matter‚” the letter‚ signed by Grobbelaar‚ stated.

“SMSA stands ready to assist the government as responsible citizens in this national crisis once formally approached.”

In their interview with Hogg‚ Van Bebber and Grobler made it clear the redesign plan was a proposal on standby should the government need such an option.

He said the ratios of medical staff would be quite high‚ with as many as 3000 people working there.

“It’s extremely expensive‚ because of the equipment being so expensive‚” Grobler said on BizNews.

He explained on the proposal: “Two days into the lockdown we were asked by a colleague at BlueIQ [the Gauteng provincial government’s economic infrastructure development project] to step up and see if we could try and assist the government by creating field hospitals in buildings that are not being used.

“Soccer City [FNB Stadium] came to mind obviously because it’s fairly big‚ there’s a lot of space‚ and we had access to all the information to unlock that as a field hospital.

Van Bebber said stadium suites and boxes are proposed as ICU units with a minimum two beds for severe cases.

He said Boogertman “delivered a speculative proposal on how one delivers a stadium and makes it work for a fully-fledged field hospital”.

“And also to deal with all the various cases‚ and how urgent they are … and how one splits the flow of people‚ and of doctors and patients … .”

Grobler said the conversion could take two to three weeks to apply if needed‚ minus imported medical equipment.