Golden Arrows brace for a backlash from wounded Orlando Pirates 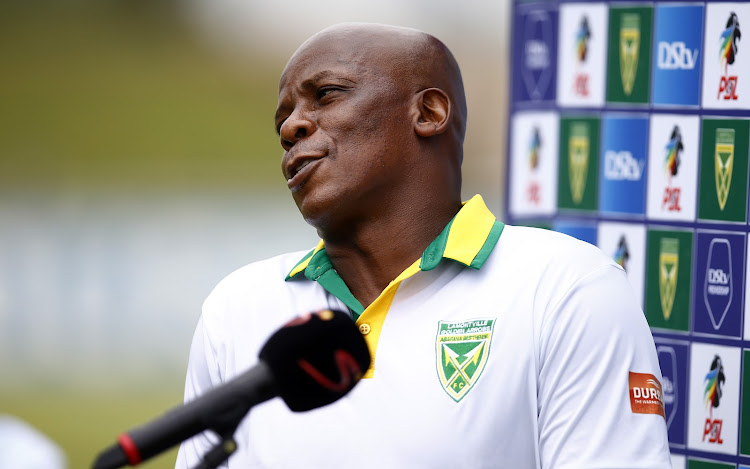 Golden Arrows coach Mandla Ncikazi is expecting a backlash from a wounded Orlando Pirates when the two sides meet in a potentially delicious league encounter at Orlando Stadium on Wednesday afternoon.

Pirates are still licking their wounds after a deflating 2-0 defeat to struggling Black Leopards on Sunday and Ncikazi is expecting a difficult day in the office when the Durban side arrives in Johannesburg.

“Tough match and tough opponents‚” the 51-year-old Ncikazi said ahead of their meeting with the inconsistent Pirates.

“Pirates are a good team‚ good playing team. Maybe let’s not read anything from the previous result [against Leopards].

"The only threat with them is that they can change the formation many times in one match and also the personnel.

“So I’m not sure what will happen after they lost [to Leopards]… whether they’ll change personnel‚ whether they change the formation.

“But with Pirates just expect a tough match irrespective of what happens with them.”

The two sides had contrasting fortunes at the weekend as Pirates suffered their second league defeat of the season after their mauling by Leopards in Limpopo‚ while Arrows are coming from a 1-0 win against Tshakhuma Tsha Matshivhandila (TTM) in Durban.

Arrows have continued to punch well above their weight under Ncikazi‚ who replaced Steve Komphela before the start of the 2020-21 campaign‚ and their fourth place on the standings is testament to the hard work he has invested in the Durban side.

He has done very well to keep his unheralded squad of players close to the summit and they are one of only three teams in the league - the others are leaders Sundowns and second-placed Swallows FC - that remain unbeaten in the DStv Premiership this season.

Ncikazi said on Tuesday he will concentrate more on preparing his charges rather than obsess too much on what Pirates may or may not do.

“Mainly‚ I will focus more on our team‚” said Ncikazi.

“I’m confident (of a result) based on what I’ve seen thus far in our team.”

Arrows' victory against TTM in their last outing‚ a fourth this season‚ took them to fourth place on the Premiership table and they are now just seven points behind leaders Sundowns‚ who have played one match more than the Durban side.

In players like utility midfielder Velemseni Ndwandwe‚ who scored the winner against TTM on Saturday‚ Ncikazi has managed to find unknown gems and helped them to make their mark in the top flight.

Ncikazi will again look to Ndwandwe and Arrows regular attackers Nduduzo Sibiya and Knox Mutizwa to preserve their unbeaten run against the fifth-placed Buccaneers.

Abdul Bhamjee was more than a PRO to the National Soccer League (NSL)‚ which formed from 1985‚ and was also a driver of its marketing and financial ...
Sport
10 months ago

"I wish I was an Orlando Pirates player - no win, no stress, just dancing waya waya."
Sport
10 months ago

Champions Mamelodi Sundowns have a squad that is the envy of most coaches in the league but mentor Manqoba Mngqithi does not want to be drawn into ...
Sport
10 months ago

Bloemfontein Celtic have not won a match in five outings but Mamelodi Sundowns coach Manqoba Mngqithi is treading very carefully ahead of the league ...
Sport
10 months ago