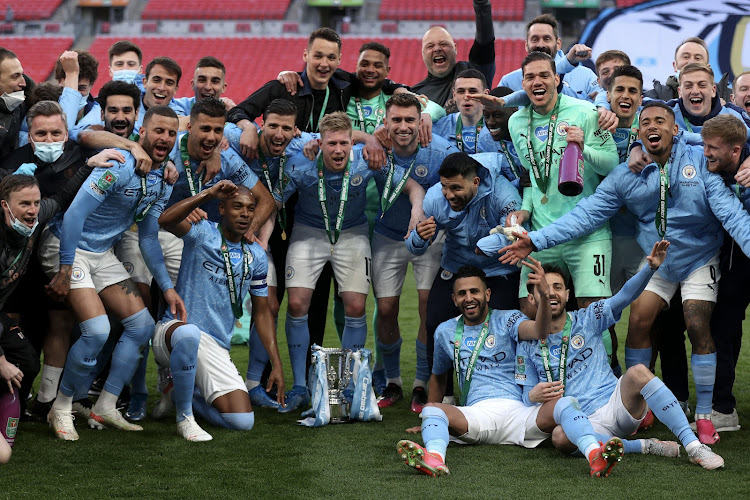 Sterling had been in and out of the lineup due a drop off in form and Sunday's game was just his fourth start in City's last 11 matches in all competitions.

But the 26-year-old was at his best at Wembley as he tormented the Spurs' defence, winning the free kick that led to City's goal scored by Aymeric Laporte.

Sterling also came close to getting on the scoresheet in the first half but was denied by Toby Alderweireld's block.

"He showed the opponent we came here to win the game. He was incredibly aggressive.

"Serge Aurier is a fast defender and they are incredibly good at defending shots and the blocks.

"Hugo Lloris made some incredible saves but he was brilliant."

Guardiola said the win, which sealed a record-equalling fourth successive League Cup triumph, felt even more special as it came in front of 2,000 City supporters.

"We missed them," Guardiola said.

"It wasn't full but they represented all the people. To share it with them, it sounds better.

"The reason we do that is for them."

"You can just tweet the name and leave the rest of the drama," said one fan.
Sport
2 weeks ago

Florentino Perez is not used to losing, either when signing soccer stars to grace the immaculate turf of Madrid's Santiago Bernabeu Stadium or in ...
Sport
3 weeks ago

Carlos Queiroz appears to be the man the SA Football Association (Safa) have resolved to appoint as the next Bafana Bafana coach‚ following ...
Sport
3 weeks ago

While Kaitano Tembo is happy with his team's performance in the draw against Black Leopards‚ the SuperSport United coach believes his charges should ...
Sport
3 weeks ago

It was that sort of afternoon at Dobsonville Stadium where neither Swallows FC nor Orlando Pirates teams did enough to win their 1-1 DStv Premiership ...
Sport
3 weeks ago
Next Article