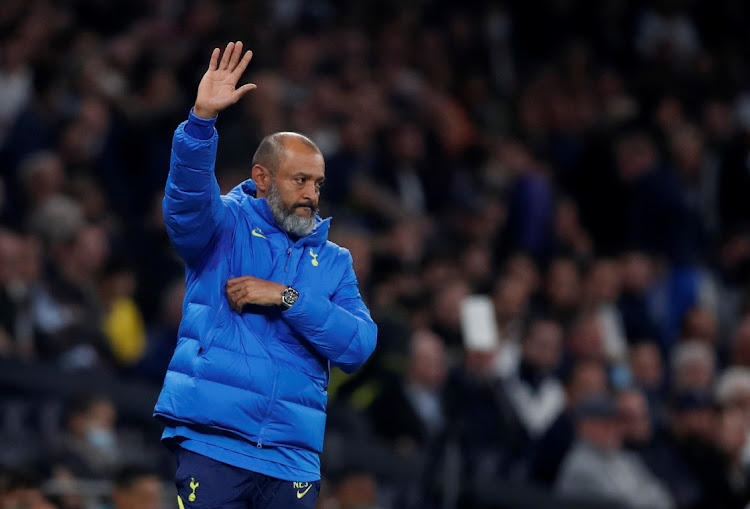 Nuno Espirito Santo has been fired as the Tottenham Hotspur manager with the Premier League club saying an update on the new coach will soon follow.
Image: MATTHEW CHILDS

Tottenham Hotspur have sacked manager Nuno Espirito Santo, the Premier League club announced on Monday, after a 3-0 home loss to Manchester United at the weekend left the London side eighth in the table.

Spurs had topped the Premier League standings in August after winning their opening three games but lost for the fifth time in the league to now sit 10 points behind leaders Chelsea.

Nuno's coaching staff have also been relieved of their duties.

An Argentine soccer coach was shot in the shoulder and players fled the pitch on Sunday as Huracan Las Heras fans fought among themselves during a ...
Sport
2 months ago

The club have not yet announced a replacement.

"I know how much Nuno and his coaching staff wanted to succeed and I regret that we have had to take this decision," Spurs' managing director of football Fabio Paratici said in a statement.

"Nuno is a true gentleman and will always be welcome here. We should like to thank him and his coaching staff and wish them well for the future."

Nuno was appointed as Jose Mourinho's permanent replacement on a two-year deal in the close season after impressing during his four campaigns at Wolverhampton Wanderers.

He had a bright start, beating champions Manchester City on the opening day, but their season unravelled after defeats in four London derbies.

Mamelodi Sundowns co-head coach Rulani Mokwena tried all week to tell everyone how dangerous Eric Tinkler’s Cape Town City will be against them in ...
Sport
2 months ago

The 3-0 loss to United without a single shot on target had Spurs fans booing Nuno and chanting, "You don't know what you're doing".

They sit third in their group, behind Rennes and Vitesse Arnhem, with only one win from three games ahead of their next fixture against Vitesse on Thursday.

Crystal Palace forward Wilfried Zaha has been subjected to racist abuse online and the 28-year-old shared screenshots of some of the comments after ...
Sport
2 months ago

PODCAST | From poverty to prosperity - The Willard Katsande story

This is not a football podcast. It is the inspirational life story of Willard Katsande, Zimbabwean professional footballer, a former player of ...
Sport
2 months ago