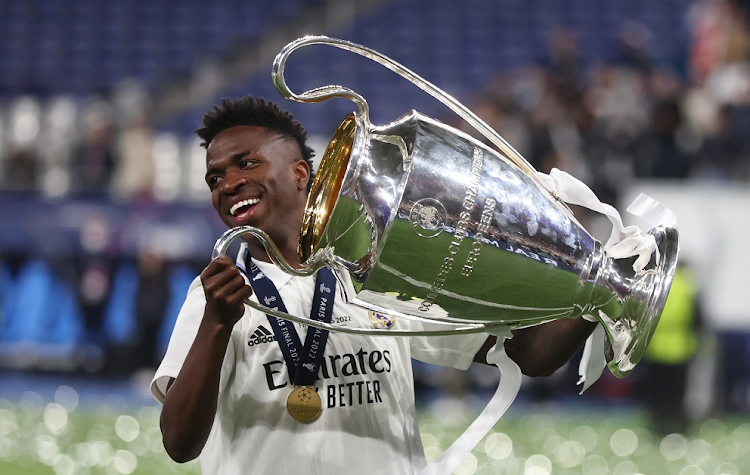 Vinicius Junior of Real Madrid celebrates with the Eufa Champions League trophy after the final against Liverpool at Stade de France in Paris on May 28 2022.
Image: Matthew Ashton - AMA/Getty Images

It was the perfect ending to the fairy-tale of an improbable hero who a year ago was tormented by criticism from media and fans who were questioning if the Brazilian youngster was worth the €45 million (R755 million) Real Madrid paid Flamengo when he was 17.

Vinicius was 20 last season, struggling with his decision-making and finishing, having scored only six goals with seven assists in the 49 games he had played, the inconsistency in his performances clouding his future at the club.

His low point was in October 2020 when teammate Karim Benzema was caught on camera giving a damning opinion of Vinicius to defender Ferland Mendy at half time against Borussia Moenchengladbach in the Champions League. With the Brazilian standing only metres away in the tunnel, Benzema whispered to compatriot Mendy in French “Don’t pass to him, he is playing against us”, blasting his strike partner’s display in the first half as his side were trailing 1-0.

Vinicius fell out of favour with coach Zinedine Zidane and hit rock bottom. Then Real lured back Carlo Ancelotti for a second spell last June after the departure of Zidane.

Ancelotti saw a diamond in the rough in Vinicius and immediately made a personal priority of developing the Brazilian youngster and putting him in the best position to succeed. With his calm guidance, Ancelotti gave Vini the confidence he needed to flourish.

One year later, Vinicius is a transformed man, an international superstar who scored 22 goals with 20 assists in a season in which he was an intrinsic part of Real's success as they won the LaLiga-Champions League double. Always with a huge smile and an energy that has made him a fan favourite in the Spanish capital, mainly with the young fans, Vinicius' persistence has gradually earned him the respect and trust of the dressing room and his blooming relationship with Benzema is one of the greatest comeback stories of recent years.

Vinicius' youth, energy, aggression and unstoppable explosion perfectly complements Benzema, who had a career-best year alongside the Brazilian, scoring 44 goals in 45 games in all competitions and a chance of winning his first Ballon d'Or.

Vinicius was decisive in Real's amazing run of comebacks against Paris St-Germain, Chelsea and Manchester City in the Champions League and again in the final against Liverpool, ghosting behind Trent Alexander-Arnold to score the winner from Federico Valverde's perfect cross in the second half.

Vinicius Junior's second half tap-in steered Real Madrid to a 1-0 victory over Liverpool in the Champions League final on Saturday for the Spanish ...
Sport
1 month ago

Liverpool deserved more from their losing Champions League final against Real Madrid on Saturday after dominating the match but they will be back to ...
Sport
1 month ago