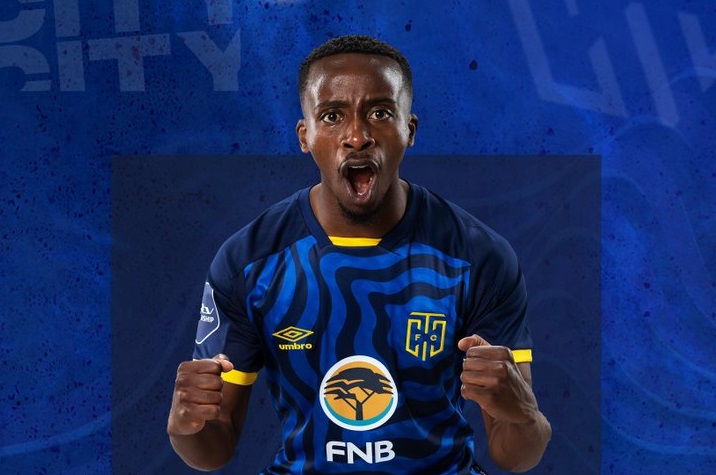 FNB, who have the naming rights to Johannesburg’s iconic FNB Stadium, had not previously been involved in SA football in sponsorship capacity.

They follow major banking rivals Absa, previously sponsors of the Absa Cup and Absa Premiership, and Nedbank, sponsors of the Nedbank Cup, in their involvement in the sport.

City were the runners-up in the DStv Premiership under coach Eric Tinkler in 2021-22.

“FNB, one of SA’s leading brands, is now the official title sponsor of Cape Town City FC,” the club said.

“This three-year sponsorship will see the FNB brand adorn the front of Cape Town City’s shirt.

“The partnership begins from the 2022-23 season, which will see the Citizens compete domestically in the Premier Soccer League and continentally in the [2022-3] Caf Champions League.”

City chair John Comitis said the sponsorship will give the club more financial clout and allow it to expand its development structures.

“FNB is one of the most recognisable brands in the country and has been a pioneer in strategic sporting partnerships,” Comitis said.

“These types of sporting investments have shaped the growth and potential of SA sport and we laud the desire and vision of FNB to play a critical role in SA’s rich sporting history and future.

“This partnership allows City to expand the work we do at grassroots level, as we develop our DreamClub100 project and refine the future football stars and ambassadors of tomorrow.”

Rob Gwerengwe, CEO of FNB Middle Market, said: “Football is the heartbeat of SA communities, and we’re thrilled to have an opportunity to delight fans on and off the field through our partnership with this incredible football club.

“As a trusted financial services provider with a strong commitment to social prosperity, our sponsorship is also designed to uplift communities across the Western Cape.”

Since Comitis bought the Mpumalanga Black Aces franchise in May 2016, City have reached four cup finals, winning two of them, and not finished outside the top seven in the Premiership.

Their participation in the Champions League in the coming campaign will be their first in the continent’s premier club competition.

Manchester United have confirmed the appointment of Bafana Bafana legend Benni McCarthy as one of the club’s three first team coaches, to serve under ...
Sport
1 week ago

POLL | Will Benni McCarthy get Ronaldo back on form?

Kaizer Chiefs have launched their 2022-23 jersey, which, with the themes Unity in Action and a Fresh Revival, the club says embodies the family ...
Sport
2 weeks ago

Mamelodi Sundowns have launched their jersey for the 2022-2023 season, and if Orlando Pirates fans baulked at the cost of their new shirt at R1,099, ...
Sport
2 weeks ago

Orlando Pirates have launched their slick new jersey for the 2022-23 season, though the price of R1099 has already set some tongues wagging.
Sport
3 weeks ago