‘Like five stages of grief’: medics hold out for Charlotte Maxeke’s reopening 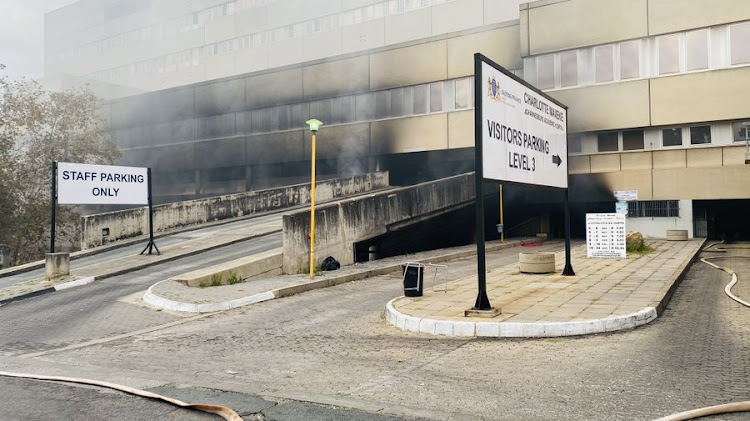 A fire broke out on April 16 2021 at Charlotte Maxeke Hospital in Johannesburg.
Image: Gauteng health

For Gauteng emergency room doctor Suhayl Essa, work has become a revolving door of different hospitals while he waits for Charlotte Maxeke to reopen its doors.

Essa has worked shifts at six different hospitals around Gauteng since a fire gutted his workplace last year and left him and hundreds of other medical personnel at the whim of the province’s health department.

“I’ve been in six different hospitals while trying to help out in various [emergency] units,” he said. “Right now I’m driving back from Vosloorus.”

At some facilities safety equipment hasn’t been serviced since 2019, while others are just not being maintained
News
8 months ago

After the fire, Essa was first deployed to Helen Joseph Hospital, where he carried on working as an emergency room doctor.

But as the pandemic wore on and Charlotte Maxeke’s reopening date was pushed out, he was soon sent to other hospitals in the province as they grappled with staff shortages.

The closure of the 2,000-bed hospital, Gauteng’s largest, saw patients being redirected to other hospitals that were soon struggling to cope with the influx of patients.

Community health care in the city had subsequently fallen on Helen Joseph and Hillbrow hospitals, said Essa, adding that on one occasion he and other doctors had been roped in to help move beds and critically needed medical apparatus from Charlotte Maxeke to the community health centre in Hillbrow.

Along with the extra travelling to far-flung hospitals, the deployments meant that medical personnel rarely worked with their colleagues with whom they had built up trust and understanding.

The only time we get to see our colleagues is when coming on or ending a shift. It’s been mentally and emotionally taxing.

“It’s extremely difficult working with a new team and new bosses,” he said. “The only time we get to see our colleagues is when coming on or ending a shift. It’s been mentally and emotionally taxing.”

One of his colleagues has since been hospitalised with depression, he added.

Meanwhile, Essa is looking forward to restarting work at Charlotte Maxeke when the emergency unit reopens its doors on March 15.

That glimmer of hope had been further buoyed by signs that the pandemic was coming to an end, he added.

“We’re exhausted,” he said. “I’m looking forward to things getting back to normal.”

What form that normality will take remains to be seen, however. Essa was used to the “broken system” in which he and his colleagues worked.

“This is like the five stages of grief,” he said of the mental state he and his fellow workers were in. “We’re at the acceptance stage. We just have to have faith that things will work out.”

As the pandemic waned, other medical issues had come to the surface, particularly in mental health, he said.

The psychiatric wards at Charlotte Maxeke were due to reopen at the same time as the emergency unit, he added.

“All the measures are in place.”

As hospitals continued to experience bed shortages across the board, finding space for psychiatric patients had become a challenge with some hospitals setting up temporary wards in containers.

Rare chance for Africa to make its own vaccines, but market must buy