Centurion launch of 'On the Devil's Trail: How I hunted down the Krugersdorp Killers' 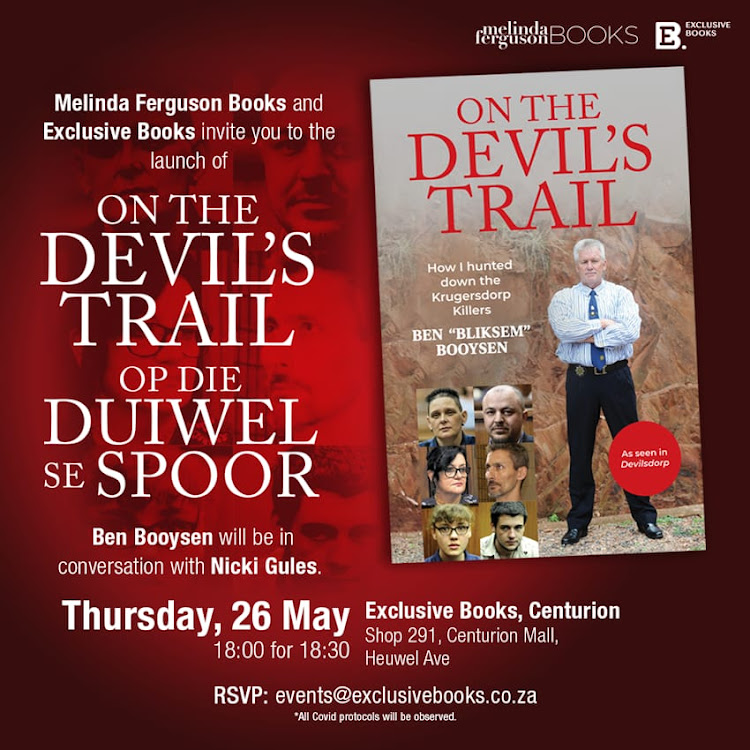 Ben 'Bliksem' Booysen will be in conversation with his ghost writer, Nicki Gules, at the Exclusive Books Centurion launch of 'On the Devil's Trail'.
Image: Supplied

About On the Devil's Trail

After a string of police botches, Captain Ben “Bliksem” Booysen was assigned the Krugersdorp Killers' case in 2016. Eleven people had already been brutally murdered by a group calling themselves Electus Per Deus. Booysen made headlines when he arrested the mastermind, Cecilia Steyn, and her accomplices. SA's own “Chuck Norris” takes the reader behind the scenes of the killings, divulging new and shocking details of the crimes that kept the nation on edge for almost a decade.

On the Devil's Trail is published by Melinda Ferguson Books, an imprint of NB Publishers

'On the Devil’s Trail: How I hunted down the Krugersdorp Killers' was recently launched at Exclusive Books in Rosebank.
Books
1 month ago

On the Devil's Trail | How I hunted down the Krugersdorp killers

The killing spree started in 2012. Eleven people had been brutally murdered by a group calling themselves Electus per Deus, but four years later no ...
Opinion & Analysis
2 months ago

The fair takes place on May 21.
Books
2 months ago