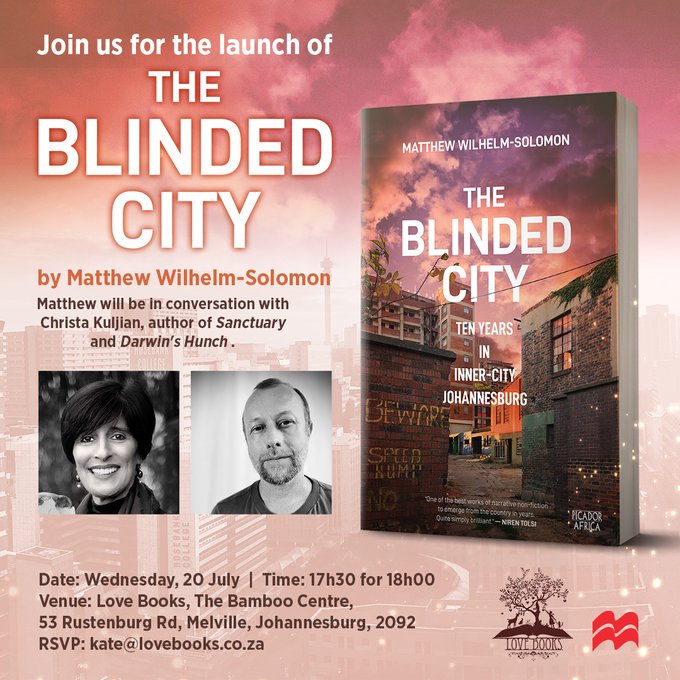 Join author Matthew Wilhelm-Solomon in conversation with Christa Kuljian for the Joburg launch of 'The Blinded City' on July 20.
Image: Supplied

One of the best works of narrative non-fiction to emerge from the country in years. Quite simply brilliant. — NIREN TOLSI

Amid evictions, raids, killings, the drug trade and fire, inner-city Johannesburg residents seek safety and a home. A grandmother struggles to keep her granddaughter as she is torn away from her. A mother seeks healing in the wake of her son’s murder. And, displaced by the city’s drive for urban regeneration, a group of blind migrants try to carve out an existence.

The Blinded City recounts the history of the inner city from 2010 to 2019, primarily from the perspectives of the unlawful occupiers of spaces known as hijacked buildings, bad buildings or dark buildings. Tens of thousands of residents, both South African and foreign nationals, live in these buildings in dire conditions. This book tells the story of these sites and the court cases around them, which strike at the centre of who has the right to occupy the city.

In February 2010, while Joburg prepared for the Fifa World Cup, the South Gauteng high court ordered the eviction of the unlawful occupiers of an abandoned carpet factory on Saratoga Avenue and that the city’s metropolitan municipality provide temporary emergency accommodation for the evicted. The case, which became known as Blue Moonlight and went to the Constitutional Court, catalysed a decade of struggles over housing and eviction in Joburg.

The Blinded City chronicles this case, among others, and the aftermath — a tumultuous period in the city characterised by recurrent dispossessions, police and immigration operations, outbursts of xenophobic violence, and political and legal change. All through the decade, there is the backdrop of successive mayors and their attempts to “clean up” the city, and the struggles of residents and urban housing activists for homes and a better life. The interwoven narratives present a compelling mosaic of life in post-apartheid Joburg, one of the world’s most infamous and vital cities.

'Anxious Joburg' focuses on Johannesburg, the largest and wealthiest city in South Africa, as a case study for the contemporary global south city
Books
1 year ago

Once renowned for its shops and bustling street life, this neighbourhood is now regarded as urban slum. But is poverty and neglect all there is to ...
Lifestyle
2 years ago

Farah makes it plain that xenophobia doesn’t exist only on one side of the divide between refugees and citizens of the host country, writes Margaret ...
Books
3 years ago