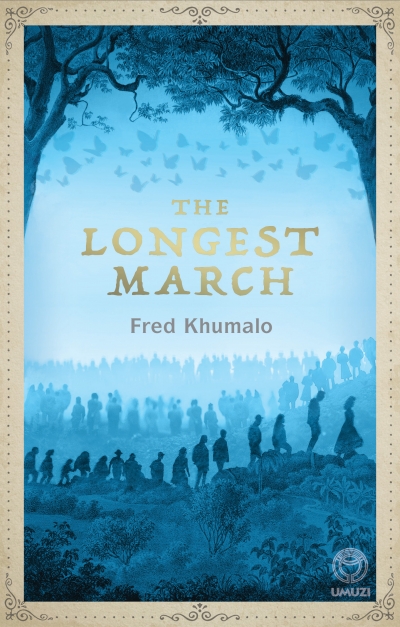 A hundred-and-twenty years ago, seven-thousand Zulu mineworkers walked from the gold mines in Johannesburg to Natal, covering a distance of five-hundred kilometres over ten days. This journey was their longest march.

It is 1899 and Philippa’s fiancé Nduku has just broken off their engagement. She is heartbroken – after all, she has followed him from Kimberley, where they first met, to the goldfields of Johannesburg.

In this bustling new city, tensions are mounting between the South African Republic and the gold-hungry British Empire. When war is declared, the mines are shut down and migrant workers ordered to leave town.

But how do you get home and out of harm’s way when there are no running trains and home is hundreds of kilometres away? You walk.

Over perilous terrain – sleeping in the open, being attacked by wild animals and harassed by armed white farmers – Nduku and Philippa and seven-thousand others walk.

Disguised as a mineworker’s wife, for Philippa is white, she and Nduku talk about their true histories, about their fears and hopes, with every footfall.

On their way to Natal, and on their long journey into their inner selves, the possibility of lasting happiness seems within reach – if only they can survive, and if only they can weather the storm of an unexpected third player in their troubled romance.

Set during an incredible event in South African history, Fred Khumalo’s new novel is a tale of heady determination, and a tribute to the perseverance and courage of ordinary men and women when faced with extraordinary circumstances.

Fred Khumalo's stories are as familiar as the boy or girl next door, allowing you in - but leaving you wanting more, writes Chrizelda Kekana
Books
1 year ago

Railways built the country but the human cost was great - and the debt is still unpaid, writes Paul Ash
Books
9 months ago

From novels to non-fiction - 18 South African scribes respond to which local book published between 1948 and 2019 has made the most significant ...
Books
1 year ago

Written even before the National Party made apartheid law in SA, Alan Paton’s ‘Cry, the Beloved Country’ would turn out to be chillingly prophetic.
Opinion & Analysis
1 year ago
Next Article