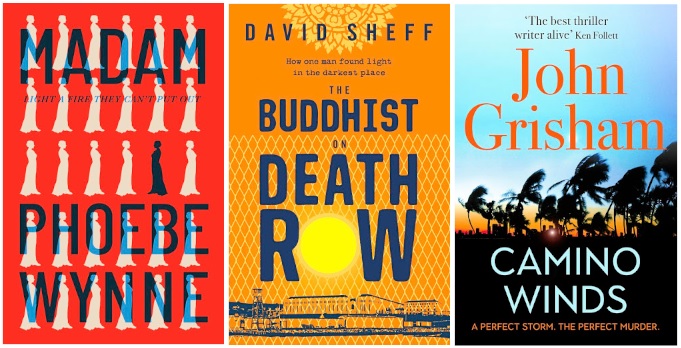 An original book about a Hotel California-esque boarding school, a compelling read about a man who spent over two decades in solitary confinement, and John Grisham's latest (if not finest...).
Image: Supplied

Rose, a young Classics teacher, accepts a post as head of department at Caldonbrae Hall, a 150-year-old boarding school for young ladies in a Gothic castle on a remote Scottish peninsula. When she arrives she finds she has a lot to learn about the arcane traditions of the school. She learns she is the only new appointment in years and that her predecessor left under a cloud. She is shadowed by a strange pupil who is obsessed by the former Classics teacher and spits vitriol at Rose whenever she confronts her. As the end of her probation period approaches, Rose uncovers the secrets that underpin the institution's foundation. The school is like Hotel California, you can check out but you can never leave. An original and absorbing book. Gabriella Bekes

Sheff tells the story of Jarvis Jay Masters, on death row after being charged with the murder of a prison guard. It is essentially about a man who was not seeking religion but found himself in the thick of it when he was condemned to die. The story simultaneously looks into what made Masters: born in 1962 in Long Beach, California, into a house filled with crack cocaine, physical abuse from his father, and men who paid his mother for sex. He and his siblings were split up and sent to foster care when he was five. He was in and out of homes and institutions, enduring obscene violence and trauma. His criminal life progressed from turns in juvenile detention to San Quentin, where he was set up for the murder of a guard. The story then jumps to present life as he faces his unresolved issues to achieve inner peace through Buddhist precepts. As well as the spiritual, the book takes you into the life of a man who has spent over two decades in solitary confinement - more than half his life. A compelling read. Chrizelda Kekana

I have had a love-hate relationship with Grisham's novels since reading the gut-clenching A Time to Kill. After that he wrote bestselling legal thrillers - The Firm, The Runaway Jury etcetera, but he went off course with the mawkish The Painted House and the didactic Gray Mountain. His Camino Island was refreshing, with a new setting and an enjoyable yet morally skewed set of characters who were all part of the book world. In Camino Winds he takes readers back to the small island populated by authors and we are re-acquainted with the central figure of Bruce Cable, owner of the local bookstore. Camino is under attack from Hurricane Leo, which becomes the perfect cover for murder when one of Bruce's writer friends is killed. There follows the usual twist, turn, untwist, twist, turn. Not one of Grisham's finest, but enjoyable at least. Jennifer Platt @Jenniferdplatt

Joe Biden's very human story about carrying on as you grieve, a sharp, perceptive and powerful novel drawing on true crime events, and a beautifully ...
Books
1 year ago