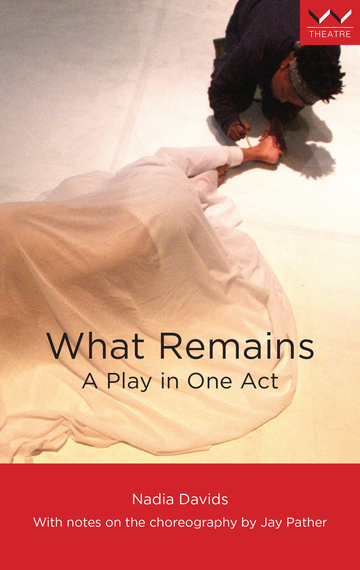 'What Remains' is a fusion of text, dance and movement to tell a story about the unexpected uncovering of a slave burial ground in Cape Town.
Image: Supplied

Wits University Press is delighted to announce that Nadia Davids’ play, What Remains, has won the English Academy of Southern Africa Olive Schreiner Prize for Drama (2020).

The Olive Schreiner Prize for drama forms part of a larger annual competition in creative writing of English expression, which includes prose and poetry. The award is named after the SA author and activist Olive Schreiner.

The convener of the adjudicators, Prof Owen Seda, said in the committee’s report: “Here is a new spellbinder in contemporary SA theatre. Davids’ What Remains fuses incident, character, text and physical theatre to present a profound metaphor of the country’s ongoing struggle to reconcile its troubled past with an imagined future. What we have here is a profound piece of creative writing that demonstrates an unequivocal and deliberate effort to tear the form book as it breaks new ground through extensive research, effort and a depth of thinking about issues which is second to none.”

What Remains is a fusion of text, dance and movement to tell a story about the unexpected uncovering of a slave burial ground in Cape Town, (loosely based on the events at Prestwich Place), the archaeological dig that follows and a city haunted by the memory of slavery. When the bones emerge from the ground, everyone in the city — slave descendants, archaeologists, citizens, property developers — is forced to reckon with a history sometimes remembered, sometimes forgotten.

Roshan Cader, commissioning editor at Wits University Press, said it had always wanted to work with Davids and publish her plays.

“Regrettably, other publishers often beat us to the post. Our luck turned when we approached her to publish What Remains, and happily she granted us permission to license her play for the SA market. It is an important play for South African audiences to read, and we hope universities and schools around the country will make use of it.

“There is important history being told by our storytellers and dramatists that don’t often find their way into the school curriculum. As publishers we see something unique and daring in what the writer is doing and feel compelled to publish it and hope it will be picked up by readers who will be similarly moved. Clearly we were right. Winning the Olive Schreiner Prize for Drama is a wonderful testament to the strength of this play that includes the choreography by Jay Pather.

“What Remains is at its essence a story about slavery in the Cape, but it is more than that. It is also about memory and forgetting, about the relationship between the living and the dead, modernity and development, and honouring our ancestors and where we come from. It is a story that speaks to the zeitgeist of the student protests of 2015/2016 and for a reckoning of our past trauma that cannot go unremembered.

“In the adept hands of two award-winning creatives, Davids and Pather, the story is elevated to convey the hauntology of SA’s past onto its present in a manner that is sublime, deeply mournful and quintessentially unique. The manner in which the text is published shows the transcendent nature of the creative process through interdisciplinary collaboration. This play and its genre-bending approach is richly deserving of the accolades and we are proud to be the publisher of such a fine play script.”

This book probes the complex entanglements of different intellectual traditions in the SA context, by examining two case studies, the core around ...
Books
8 months ago

You Strike a Woman, You Strike a Rock / Wathint’ Abafazi, Wathint’ Imbokotho is a bristling example of protest theatre-making during the height of ...
Books
10 months ago

Open Book Festival returns with an eight part podcast series celebrating just some of the works of literature to come out of SA this year. The series ...
Books
6 months ago

Starting on February 3, the season continues to illuminate shared histories and values between SA and the USA.
Books
3 months ago

Mike van Graan's 'Bafana Republic and Other Satires' is a selection of monologues from a series of one-person satirical revues.
Books
1 year ago