EXTRACT | 'No Retreat, No Surrender' by Oscar Chalupsky, with Graham Spence: An uplifting account of perseverance 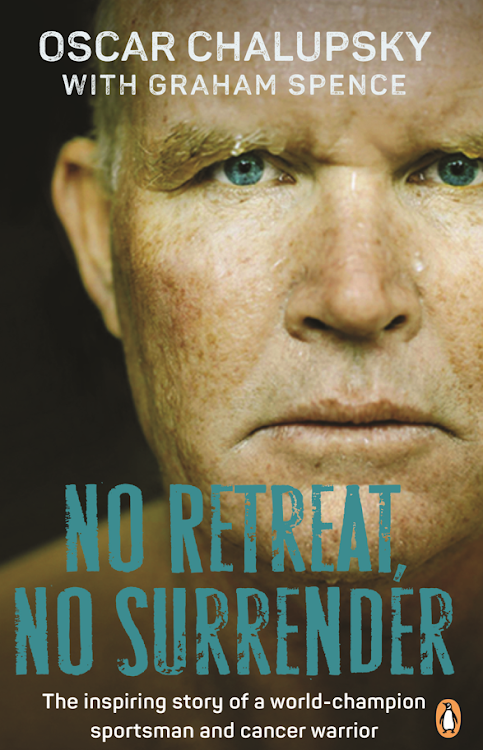 No Retreat, No Surrender is an inspiring account of perseverance, talent and attitude.
Image: Supplied

Few athletes hold a record comparable to that of Oscar Chalupsky. He made history at the age of 15 as the first person to win both the junior and senior ironman titles on the same day at the South African National Lifesaving Championships, he was the country’s spokesperson at the 1992 Barcelona Olympics and he is a multiple-global surfski champion, having won the internationally famous Molokai to Oahu World Surfski Marathon in Hawaii a record 12 times — his most recent victory at the age of 49.

In 2019 he was diagnosed with myeloma, an incurable bone marrow cancer and told he had six months to live. But as with everything else, Chalupsky was determined to emerge victorious. He continues to paddle kayaks, play golf and with a combination of medical treatment, exercise, iron determination and unconquerable optimism he has defied all the doctors' predictions. How does he do it?

In this book, Chalupsky relives his exhilarating and nail-biting races, and shares the lessons he has learnt from winning on the international surf life-saving, kayak and surfski circuits, and running several successful businesses. The final chapters recount his courageous battle against cancer, the vital support of his family and friends, and his refusal to let the deadly disease dictate his life.

No Retreat, No Surrender is an uplifting account of grit, perseverance, talent and attitude vividly capturing the determined mindset of an inspirational sporting legend.

Oscar Chalupsky was born in 1963 in SA. His long list of accomplishments include being 12-times World Molokai Surfski Champion; 10-times winner of the Texan Challenge, considered the world’s toughest kayak race; triple winner of the big white-water Umkomaas River Marathon; Spain’s famous Sella Descent; as well as a multiple Surf Ironman champion. Living between Portugal and SA, Chalupsky is CEO of Nelo Surfski, a kayaking coach and co-founder of NuMobile in SA.

Graham Spence is the co-author of the best-selling trilogy, The Elephant Whisperer, Babylon’s Ark and The Last Rhinos, which he wrote with conservationist Lawrence Anthony. A former journalist and editor from SA, he lives in England.

The most-celebrated river race in SA is the Dusi Canoe Marathon.

It’s a three-day, 120-kilometre dice down two rivers that come together in a jagged valley of a thousand hills and ends in an Indian Ocean lagoon. It’s easily the biggest river race on the African continent and one of the largest marathons of its kind in the world.

Unfortunately for my family, it is the only major kayak race in the country that no Chalupsky has won. That hasn’t been from lack of trying. Indeed, my father and all three of his sons have given it a full-throttled go. My best is a third-place finish, though I held the record for the fastest final day with Springbok Les Keay for more than a decade.

The race, starting on the Umsindusi River in Pietermaritzburg and finishing at the mouth of the Umgeni River in Durban, was founded by world-renowned conservationist Ian Player, elder brother of the even more famous golfer Gary. The idea, almost a vision, first came to him as a homesick soldier huddling miserably around a campfire on the battle-ravaged Italian front. Tired to his bones of bloodshed and bullets, his only escape from the horrors of the Second World War was dreaming about the absolute freedom of roaming the pristine bush in his native land — specifically the rivers spanning Natal’s two major cities. He vowed that if he survived the war, he would paddle those wild waterways to celebrate being back home.

In the first race, Player was the only paddler to finish. It took him six days and eight hours, having survived two days of low rivers, then a flash flood and finally a night adder snakebite. That was in 1950, and the magnificent legend of the Dusi was born.

Paul Chalupsky, my father, was one of the earliest contestants. But as mentioned, the Chalupskys are not fleet of foot and the Dusi is more of a biathlon than a pure paddling race. What my dad gained in the water, he lost on land.

But to live in SA and not race the Dusi is missing out on one of the country’s great sporting highlights, so the Chalupskys kept entering. I eventually accepted that the river would have to be at Everest levels with no portages for me to stand a chance of winning.

But there were other ways I could contribute. In the early 1990s, marketing guru Ray de Vries and I came up with the idea of enticing celebrities to take part as a publicity tactic to boost race entries. However, as few — if any — celebrities knew how to paddle, this was a problem.

“We’ll need someone to hold their hands,” said Ray.

I didn’t say this lightly. The Dusi is a hard race. It has a number of hazardous rapids and at least two paddlers have lost their lives. If the water is low, you risk holing your boat on the gazillion jutting rocks strewn like primed grenades along the riverbed. If the water is high, the rapids rage and flip boats with explosive abandon. The slick portages up steep hill slopes are gruelling. Many contestants don’t finish and each day sees scores of splintered kayaks littering the banks as paddlers feverishly try to patch them up. I would have to be super-vigilant ensuring any celebrity’s safety. The fallout of such a potentially high-profile failure would be frightening.

We decided to take it even further. Not only would I be escorting them down the river, but most would also stay with me and Clare at our home for the duration of the race. So it would be an intense, all-consuming kayaking experience for them, being with me almost around the clock.

The first person we approached was Springbok rugby legend Naas Botha, one of the finest flyhalves in the world. Botha, who was in great shape and still playing at top level, eagerly accepted. However, apart from his sport commitments, he was also making a name for himself as an astute rugby commentator and was extremely busy. Consequently, we had no time to train together — just a brief paddle in a rain-filled quarry on the side of the N2 highway.

He had to do a TV broadcast in Johannesburg the night before the race, so he caught a red-eye flight to Durban, where I picked him up and then sped to Pietermaritzburg. The Dusi start is a gut-swooping drop down the wall of the Ernie Pearce Weir, thick with flailing paddles and crashing boats, providing a terrifying baptism of fire for a novice.

Not only did Naas survive that, but we shot every other rapid in sight, only getting out when the water was too low. As expected, Naas was intensely competitive and whenever we got caught in a logjam of paddlers on the portages, I just shouted, ‘Naas Botha would like to come through!’ Such was his status that the crowd in front of us opened like Moses parting the Red Sea.

At the end of each stage, Ray’s organisational flair had the media thronging the overnight stops, where Naas, often clutching a paddle, gave interviews. The publicity was so widespread that more people knew Naas was in the race than who was actually winning. Most major newspapers gave daily blow-by-blow accounts, with Naas in the headline.

On the third day we shot the Grade 4 rapid called Tops Needle, a major feat for a beginner, and had our first case of capsizing. I think we even broke a paddle, and I remember Naas’s blond head popping up out of the foaming water with that famous toothy grin. He was having the time of his life. We ended up in the top 10% of the field, a phenomenal achievement even for a fit, world-class sportsperson like Naas. The Dusi is extremely unforgiving for inexperienced paddlers.

Naas was a great advocate for the race and for weeks afterwards would mention it even when commentating on rugby games for SuperSport, the country’s premier TV sport channel. He was also at pains to point out how tough it could be.

The publicity we got from Naas’s “guest appearance” was so phenomenal that the after year the Dusi attracted more than 1,500 entrants. Consequently, Ray and I decided to stick with our winning formula and invite another celebrity. This time we approached Clive Barker, the SA football coach who steered the national team to victory in the 1996 Africa Cup of Nations.

Unlike Naas, Clive was not in peak condition. In his 50s and nursing a knee injury from his professional football-playing days, he had trouble getting in and out of the kayak. But Clive was not one to complain, though perhaps it is fortunate that we didn’t have a single swim in the entire race — again, remarkable for a novice.

Taking Clive down the river was an incredible eye-opener for me. Though rural, the Umgeni valley is no by any stretch of the imagination sparsely populated. The days of Ian Player dreaming of “pristine bushveld” while fighting in war-torn Italy are long gone. Today, it’s home to many thousands of people, and it seemed that every one of them had come to see Clive. I had no idea how revered he was among black South Africans. Huge crowds lined the riverbanks, cheering like crazy when we appeared and mobbing us on the portages. Knowing that Clive had a crook knee, I told him to ask the children to carry our kayak. The response was simply staggering. At one portage I think we had 30 youngsters vying to get a hold on the boat as we clambered up a hill. It was superb to see how much they loved him, and he reciprocated magnificently, signing autographs, chatting, joking and enjoying himself immensely.

The unbelievable reception in the valley spurred us on the after year to invite another football star, and through Clive we reached out to Doctor Khumalo, the country’s most famous midfielder. This was quite a feat as Doc was not only one of the busiest people I know and forever on his cellphone, he had never seen a kayak before — let alone watched a river race. Indeed, when we arrived at the start, he asked where our “team” was. He had expected the equivalent of an entire football squad to accompany us.

As we were about to glide down the fast-flowing Ernie Pearce Weir wall, barely 100 metres from the start, he shouted, ‘WHAT? Are we going down there?’

I nodded. ‘That’s where we’re going.’

Saray Khumalo was the first black African woman to summit Mount Everest in a feat that took her four attempts. Many would have called it quits, but ...
Books
3 months ago

'I glimpsed the curve of my own soul': mountaineer Adrian Hayes on summiting K2

Since its first ascent on July 31, 1954 (by Italians Lino Lacedelli and Achille Compagnoni), numerous attempts have been made to summit the so-called ...
Books
2 years ago

When I began this story, I thought I would be writing about my son, who had cancer, and how he fought to race at the Olympic Games.
Books
11 months ago