People were so gobsmacked when Elon Musk puffed weed on a live webcast that his comments got lost in the smoke. But he made some very sobering predictions about artificial intelligence that perhaps should be taken seriously 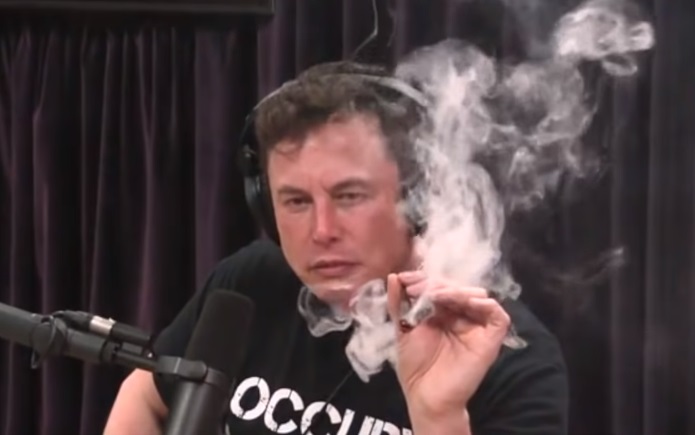 A screen grab of Elon Musk smoking weed on a webcast of the Joe Rogan Experience.
Image: PowerfulJRE/YouTube

Elon Musk has been making headlines recently for comments ranging from a tweet about taking Tesla private to being entangled in a weird clash with rapper Azealia Banks.

His latest headline-grabber was smoking weed during a live screening of the Joe Rogan Experience podcast. His continued erratic behaviour is affecting the Tesla share price, but perhaps his most troubling comments were the ones he made about artificial intelligence (AI) and the future of humans.

Musk is not the first notable individual to warn about the dangers of AI. Stephen Hawking was worried about what is sometimes called superhuman AI, despite AI giving him the ability to communicate and carry out much of his work. James Bridle's recent book, New Dark Age, is adding yet another voice to the growing fears around AI.

Musk says he is no longer fearful about AI because he has taken on a “fatalist attitude” towards it. But for those of us who have not yet fully considered what the future of AI could mean for the human race, here's a recap of what Musk said to Rogan about it:

Musk states that one of the biggest problems with AI will be humans using it against each other. There are already concerns about AI weaponry, so maybe he has point.

This point could be taken as the summary of Musk's AI argument in the interview. He believes that as AI develops, humans will not be able to keep up with it.

Rogan then wonders what would stop ‘the machines’ from asking, “Why should I keep this dumb, finite form alive?” That’s humans, in case it wasn’t clear. The question does not get answered.

3. "It could be terrible. And it could be great. It’s not clear. One thing is for sure we will not control it."

Elon Musk tells Rogan how he has tried to warn the American government, including talking to Obama directly, about the dangers of AI. “I try to convince people to slow down AI, to regulate AI. This was futile. I tried for years. Nobody listened.”

Rogan paints Musk as the character in a movie that warns everyone about impending doom, but no one listens.

4. “Your phone is already an extension of you. You are already a cyborg.”

Musk argues that our smart phones have already become extensions of human beings and increase our intelligence. Thus, what is his best case scenario to dealing with AI? To merge with it à la Stephen Hawking, and he is already working on his next big idea called Neuro-link.

5. “If your biological self dies you can probably just upload it into a new unit.”

According to Musk, we are moving towards a future where when your biological body dies, you could possibly be uploaded into a new unit and continue living as a computer.

To fear or not to fear artificial intelligence?