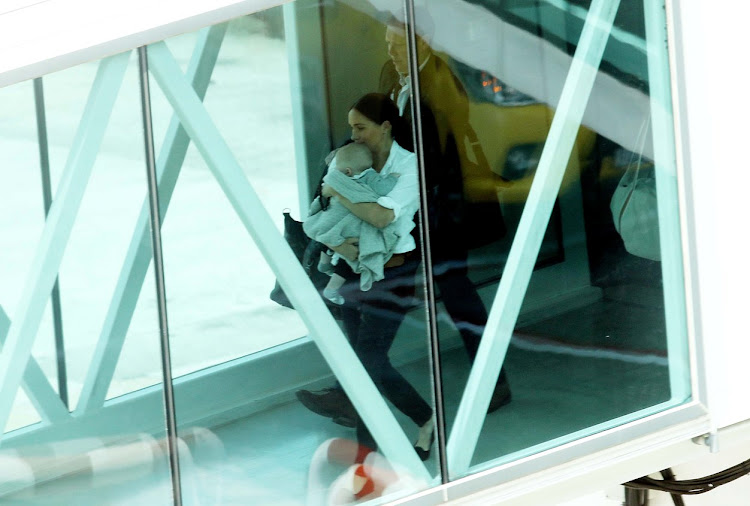 Meghan Markle and her baby son, Archie, cross an airbridge at Cape Town International Airport on September 28 2019, on their way on to a scheduled British Airways flight to Johannesburg.
Image: Esa Alexander

Meghan Markle flew out of Cape Town on Saturday as the ripples from her visit to the post office where Uyinene Mrwetyana was killed spread around the world.

The Duchess of Sussex carried her baby, Archie, on to a British Airways flight at Cape Town International Airport, and was expected to land in Johannesburg around 4pm.

Meghan's post on the sussexroyal Instagram account, showing her tying a yellow ribbon to the railing at Clareinch post office in Claremont, where Mrwetyana was murdered on August 24, won widespread praise on social media.

Within six hours, the post had attracted 275,000 likes, and many Twitter users also lauded the duchess for drawing attention to the issue of violence against women during her five-day stay in Cape Town.

Family spokesperson Thembelani Mrwetyana told TimesLIVE: "Yes, we can confirm that the duchess had a telephonic conversation with Mrs Mrwetyana. The conversation was private and as such we prefer not to divulge its contents."

Meghan and Archie will be reunited with Prince Harry in Johannesburg on Tuesday, and they will conclude their 10-day tour of southern Africa on Wednesday, when their last engagement will be a meeting in Pretoria with President Cyril Ramaphosa.

The 42-year-old post office clerk accused of raping and murdering Mrwetyana, a 19-year-old University of Cape Town student, is due back in court on November 5.

Uyinene is such a beautiful young woman. It angers me what happened to her. It’s so horrible, disgusting, painful, and frustrating that these things are happening around the world. I totally stand with Meghan on this. God said vengeance is mine!!!! 😔🥺 pic.twitter.com/IFCaVIfYbm

This is a very sad story. I applaud Meghan for reaching out to show respect & compassion to Uyinene's family. I also applaud Meghan for standing in solidarity with the women of South Africa against the femicide that is happening in the country. Hopefully change will happen soon.

Violence against women is a global issue but SA stats are staggering. I’m so pleased Meghan spoke personally 2 Uyinene’s mum&is speaking 2 people on the ground 2 educate herself on the issues&how she can help amplify the #AmINext movement. I hope 4 real tangible change 🙏🏽

May you continue to rest in Paradise Uyinene 😔❤️ pic.twitter.com/71WwMgxTFa

Confronted with the reality of how Uyinene Mrwetyana died, and the knowledge that the post office must now be added to the long list of places to be scared of, women in South Africa are reaching what feels like a breaking point. https://t.co/6K9YPuMJDM

I will never ever forget you. I'm confident that justice will prevail, you're not just a girl who got raped and killed. You're more than that, to me you're a warrior, lover and a fighter. I may not know you in your lifetime but I will carry on your legacy in a way I can. #uyinene pic.twitter.com/sIDHCNcm0O

'We are with you': Meghan's message to Uyinene on a yellow ribbon

These are the words, written in isiXhosa apparently by Meghan Markle, the Duchess of Sussex, on a yellow ribbon tied to the railing at the post ...
News
2 years ago

Uyinene Mrwetyana’s family say they are grateful the 19-year-old’s death became a turning point in the fight against gender-based violence.
News
2 years ago