Uncle Hugh was all about creating special moments, says the singer, who hopes to do just that as she performs with his band in his honour at the Hugh Masekela Heritage Festival this weekend 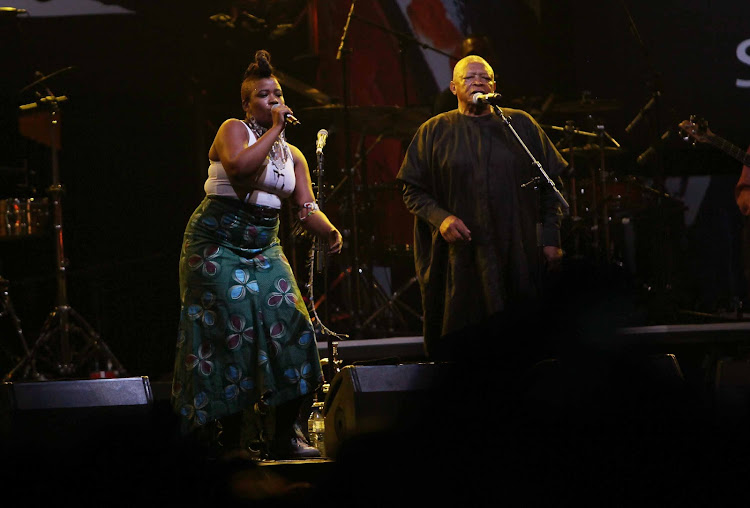 Singer Thandiswa Mazwai was a brazen 14-year-old leading the school choir when she met her mentor, the late Hugh Masekela.

Mazwai first shared a stage with the iconic trumpeter in her teens when her choir did backup vocals at one of Bra Hugh's performances. As she grew up, they became great friends and created sonic memories that will live on forever, including the songs Thanayi and Ingoma.

On Saturday, Mazwai will pay tribute to her “Uncle Hugh” as she performs with his band at the annual Hugh Masekela Heritage Festival.

We asked her how else she plans on keeping his legacy alive.

What is your fondest memory of Bra Hugh?

Uncle Hugh was all about creating special moments. He used to say he is the luxury grand dad. Every special memory has a meal, exceptional wine and incredible conversation.

I guess my fondest memory would have to be when I met him at the age of 14.

How did your relationship with Bra Hugh evolve from the time you first met him?

As I got older I started attending his shows at the club he used to have in Yeoville and I sort of became one of those fans you recognise in the audience because they are always there.

Once I started making music, his mentorship and friendship became more and more invaluable. He gave the best advice and had a way of making the insurmountable seem so small.

He was one of my dearest friends and someone I will cherish for all the days of my life.

What is the most important lesson you've learnt from Bra Hugh?

The most important lesson I learnt from Bra Hugh was to keep my humour and humility, to never take myself too seriously and to keep my head level. I’m still on the journey towards all these lessons.

What lessons do you think up-and-coming musicians can learn from Bra Hugh's illustrious career?

They can learn to be authentic to their home sound and to collaborate with other Africans.

If Bra Hugh were still alive, what do you think he would make of the recurring xenophobic attacks in SA?

Uncle Hugh was a pan-African through and through. He sang in many African languages and always represented the brotherhood of all Africans. He was also someone that had great respect and love for all human beings, so I’m certain he would be saddened by the black-on-black violence. The truth is that our people are suffering and the xenophobia in SA is an indictment on all African governments for failing their people.

How do you aim to keep Bra Hugh's legacy alive?

By playing his music, uplifting young up-and-coming musicians as he did for so many of us, and by sharing his story.

What other projects are you currently working on?

Bongo Maffin [Mazwai's band] is releasing a new album on November 29, and I'll be working on a new solo album next year.

J Something gushes over the legendary trumpeter.
TshisaLIVE
2 years ago