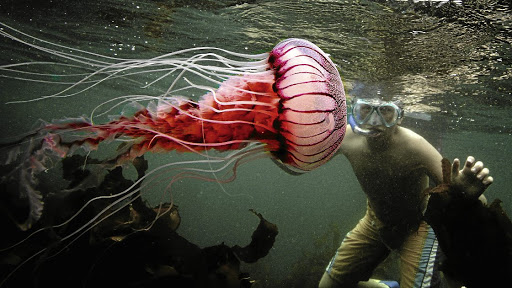 Craig Foster's son Tom comes face to face with a compass jellyfish, which might raise a red flag for most of us.
Image: Ross Frylinck

Every day Jane Goodall walked into the Gombe rain forest in Tanzania to study chimpanzees. Her observations changed the way we see these great apes. What Goodall did for chimps, filmmaker and naturalist Craig Foster is doing for the creatures of the kelp forest off the southern tip of Africa.

Every day Foster, wearing only board shorts, no wet suit or scuba tank, walks into the freezing ocean to observe and document the marine life of what he calls the "Great African Sea Forest".

"You can swim 100m offshore and feel in some ways in deeper wilderness than anywhere in Africa. I bump into animals 10 times the size of elephants," says Foster, who has swum with humpback whales, southern right whales and great white sharks.

Foster has been an "underwater tracker" for over 10 years. He has discovered myriad new behaviours and even new species - such as the transparent shrimp, Heteromysis fosteri, which is named after him.

For two years, Foster was an outsider in this enchanted forest. But after learning how to minimise vibrations in the water from his "octopus teacher", creatures from a patchwork cuttlefish to a Cape clawless otter dared to approach him.

"The otter started by touching my feet, then moved its paws up my body to my face, until it was looking in my eyes," he says.

A rare 4.3m short-tail stingray, with a poisonous tail barb, wrapped its wings around him after he saluted it.

A MENTOR WITH EIGHT ARMS

"Craig enters the world of marine creatures on their own terms ... getting to know them as personalities and observing the most intimate aspects of their lives," says Charles Griffiths, an emeritus professor in the University of Cape Town's biological sciences department. 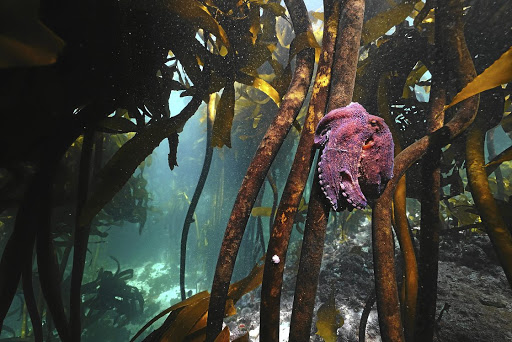 Foster says an octopus will often search kelp strands for clinging limpets, which it likes to eat.
Image: Craig Foster

The Oscar-winning Netflix documentary, My Octopus Teacher, explores his relationship with a young common octopus who was initially wary of him. It would blow sand at his face and hide behind an abalone shell, but with time the octopus started letting him accompany it on hunts.

While floating around with this cephalopod, made famous on Blue Planet II, Foster made scientific discoveries - he collaborates closely with marine biologists, anthropologists and archaeologists - that surged around the world.

Remember when Goodall observed that the Gombe chimps used sticks to fish for termites? Foster saw his superstar octopus snatching scores of shells and stones to build a temporary defence against a pyjama catshark attack, allowing it to escape.

Foster is not scared of sharks and simply keeps still in their vicinity. "If I'm backing away, a predator will see me as prey. If I'm advancing, it might feel threatened," he says.

He is sad that it's been more than a year since he saw great white sharks, numbers of which have plummeted in False Bay.

"The danger to me is not from animals. It is from drowning or being knocked out in the Cape of Storms," he says. "I have made mistakes a few times and been close to death."

But he has learnt from tiny creatures to pick up storm warnings: between nine and 12 hours before the barometer falls, they know to move out of the intertidal zone into the vegetation, he says.

"If I see that migration I have to be so careful. It means underneath there are violent powerful currents and rips coming."

After years of immersion in the frigid cold, his mind and body have adapted so well that he can spend time in water that is 10ºC without shutting down.

"The cold and the primal joy are related. It sharpens your senses and makes you feel good. You are free of gravity, everything is 3D and encounters with wild animals push you into a state of ecstatic relaxation," he says.

70% of the Earth's atmosphere comes from the  oceans and their kelp forests, the lungs of the  planet.

Blue skies, (mildly) stormy seas, freezing wind, Foster goes out. Even occasionally at night. "If I miss a day, I try to make it up. My commitment is to be in a wild space 365 days a year. I keep travel to a minimum."

Mostly he dives on his own, though his son Tom, his wife Swati Thiyagarajan - a conservation journalist - American master tracker Jon Young and other intrepid nature lovers sometimes join him.

Wavescape Ocean Festival founder Ross Frylinck regularly dives with Foster. He describes the exhilaration and terror he felt on his first dive in the crushing cold. On that morning, following Foster and a school of spotted gully sharks 10m deep in the ocean, the pain was forgotten.

"The spell was broken when I realised how cold I was. My fingers had curled into misshapen claws and were almost translucent. It was as if a steel gate had slammed shut on me," he writes in a book the two published, Sea Change: Primal Joy and the Art of Underwater Tracking, which celebrates the kelp forest and its mysteries.

He has seen pyjama catsharks mating. A puffadder shyshark giving birth. A catshark slicing out of its slippery egg. Tuberculate cuttlefish hatching. 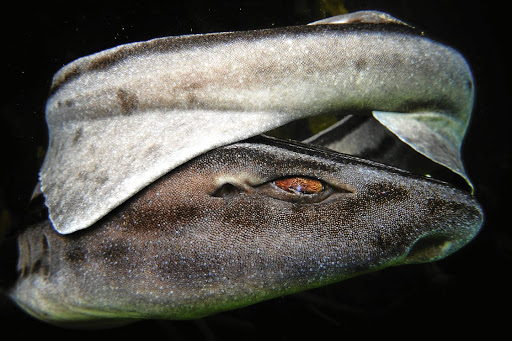 A pyjama catshark curls itself into a saucer-like shape and goes into a catatonic state when confronted by a predator.
Image: Craig Foster

Foster has a mental map of the underwater habitats of the forest, which helps him predict where to find creatures and pick up clues about their behaviour.

"I am tracking what it was like yesterday and adding tiny bits. I see small changes, who's moving around, and get some insight into what is going on. Over years I can connect the dots," says Foster.

He learnt about tracking from the San people in his 20s and with his brother Damon directed the award-winning film The Great Dance, about hunting a kudu on foot.

Bones, shells and other artefacts adorn Foster's home in Simon's Town, overlooking False Bay. His love affair with the ocean began as a child, when waves would smash into his family's Bakoven bungalow.

"My mother was diving the day before I was born. I started diving with my father, holding onto his shoulders, when I was three," says Foster.

He taught his own son the same way. When Tom turned 12, he dived holding onto the dorsal fin of a sevengill shark as a rite of passage into adulthood.

When he returned to the coast in 2010, Foster felt a deep desire to reconnect with the animals of his childhood in the tidal pools and kelp forests. 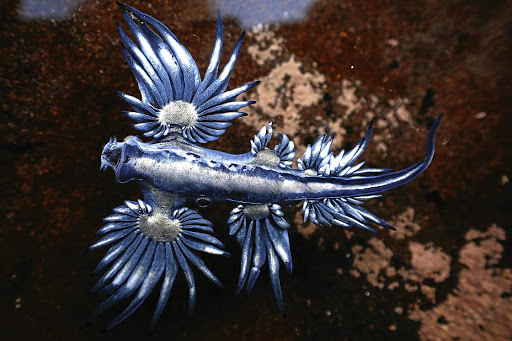 Blue dragons, or sea swallows, float on the surface and eat bluebottles. They use the bluebottles' sting cells to deter predators.
Image: Craig Foster

"They have become my mentors," he says. "Nature has deep intelligence and resilience."

Despite the overexploitation of species like abalone and rock lobster, the kelp forest off the Cape peninsula is relatively intact and has the potential to recover fully and for big fish to come back, says Thiyagarajan.

The Sea Change Trust, founded by Foster and Frylinck to protect marine life, hopes that the government might be inspired to nominate this ecosystem - which has more endemic species than the Great Barrier Reef - for Unesco world heritage site status.

"The kelp forest has so much biodiversity," says Foster. "I would need multiple lifetimes to know it."

Jokes and applause have been streaming in after the win.
Lifestyle
5 months ago

The local nature film came tops in the documentary category and 'Nomadland' was the overall top performer.
Lifestyle
5 months ago