Bongo Maffin is back! Our hiatus was necessary, says the band

After a 14-year break, the iconic '90s kwaito group have released a new album, 'From Bongo with Love'. Why now? We asked them 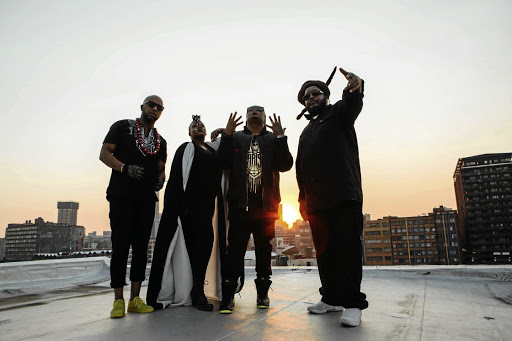 They say love is patient - and no-one knows that better than a Bongo Maffin fan; it's been over a decade since they released an album. But now the '90s kwaito group are back: Thandiswa Mazwai, Jah Seed, Stoan Seate and Speedy have reunited for their seventh studio album, From Bongo with Love.

"It's something we want to give the fans. As we got into making the album we realised that this is actually the gift we can give our fans," says Mazwai.

At the Universal Music studios in Johannesburg, it's easy to see why it took the group two years to complete the album. As Speedy provides almost inaudible commentary in the corner, Jah Seed interjects with his baritone and Seate has a farming or cooking analogy in response to almost every question.

Mazwai quips: "Do you see, this is what happens in studio, with the metaphors and more metaphors and then two years later we're still making an album."

Talk of a reunion began seven years ago, but it wasn't until they did a beer advert together and performed at a festival that nostalgia developed into a serious discussion about their return.

Seate says it's their "old flavour" that had fans demanding a comeback because they were "the soundtrack of our generation". He also felt that their hiatus was necessary and that there is now a gap in the industry for their return.

Their last album, New Construction, was released in 2005, 14 years ago, and featured only Mazwai, Jah Seed and Seate.

"We've let the ground get fertile and recover again. If we hadn't gone through those 14 years, I don't know if we'd be sitting here talking about another album. A lot of energy has been re-gathered, that ground has had time to recover and I think it's fertile again to start hammering it," says Seate.

[Producing our new album] was tricky because when we first met we were kids. Everything was about the fun ... Now you're dealing with adults, people who have time constraints

When Bongo Maffin first entered the music scene as young adults they released some of the most popular Afro Pop hits of the time.

But fast-forward 23 years and the business of making music is as much about the logistics as the creativity.

"It was tricky because when we first met we were kids, 18, 19, 20. Everything was about the fun and not knowing what's coming, still dreaming, still fantasising about what might come in the future. Now you're dealing with adults, people who have time constraints. I don't think that it was very easy trying to balance the energies of four adults with four very different ways of being," says Mazwai.

Speedy, whose last stint with the group was 18 years ago, is excited and nervous, especially because he's been given more space to explore his vocal ability.

"I went on vacation for 18 years and now I'm back from vacation. I was nervous now in studio because I had to come different. I feel comfortable with myself on this project. If you listen to the album you'll know I'm singing my ass off. The guys gave me a lot of room to really be free on the vocals. I'm equally there, properly. Before I was there in the back doing a little bit, but I'm there and they gave me some room and I appreciate that," says Speedy.

The first single off the album, Harare, was released last year. At the time they explained that it translates to ha ba robale in Sotho and "they don't sleep" in English.

Kwaito is arguably SA's greatest cultural creation because of its ability to simultaneously get people politically charged at a rally and dancing at a chisa nyama. With From Bongo with Love, the group have not strayed from their socio-political commentary.

"Is it a fight between censoring yourself and letting go? We are older people now. Were we censoring ourselves back in the '90s? I don't think so, no. You are now slightly more sensitive about certain issues as you become a parent so there's also that element . we do touch on some social issues and social commentary. We're not too far from what's happening politically. Life is political," says Jah Seed.

The South African and international political milieu might have provided endless content for the musicians but so has the re-invention of genres such as amapiano. The album features some gqom- and amapiano-inspired tracks - though Mazwai says their take on amapiano is uniquely Bongo Maffin because it's more lyrical.

For this album the focus wasn't on following a trend or a particular genre but rather finding the sweet spot between staying true to their signature sound and being relevant.

"I think the only commandment that an artist needs to follow is to be true to creativity. Just create, make stuff, have fun with it, and that's essentially what we did. We got in studio and made whatever felt fun and interesting to us," says Mazwai.

Though anxious about how their old and new fans will receive the album, Seate says he believes the timing for their return is perfect.

"As an artist, when you make music you hope that one person will like it. Fans have taken us around the world and given us our dreams, so we have to reflect something back to them with love. This album is our labour of love for the fans. It wasn't easy so it has to have been from a place of love," he says.

• 'From Bongo With Love' will be on online platforms and in stores on November 29.

I'Pantsula believes fitness is the future, in part because working out can help to relieve the tension of living in a highly-strung society like SA, ...
Lifestyle
3 years ago

This new house-music genre has taken over the airwaves in SA - and its hitmakers intend to keep it that way, writes Setumo-Thebe Mohlomi
Lifestyle
3 years ago