The theme of this solid, if sometimes slow, film resonates in a world recently devastated by the insanity of fake news 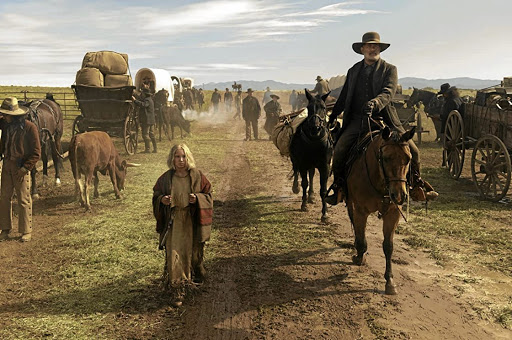 Tom Hanks in 'News of the World'.
Image: Netflix

As the actor who Americans regard as the embodiment of the best of their nation's values, Hanks is the right guide through a story that draws parallels with the present moment.

In the historical moment in which the film is set the nation has just suffered the pervasive tragedies of the Civil War and must take stock of itself and its ideals to cleanse itself of the terrible stain of its racism and reliance on slavery in order to move forward.

Hanks plays a former Confederate Texas soldier named Captain Kidd who, though he fought on the wrong and losing side during the war, is now trying to move with the times and embrace the changes in society by doing his bit to spread a new set of values.

He does this by travelling through Texas and acting as a pre-telecommunications age newsreader who charges people 10 cents a head to read them the highlights of newspaper reports. It's a job that sometimes requires him to offer clear-headed explanations of policies that anger former Confederates.

Cowgirl in the Karoo: local Western is a galloping success

‘Flatland’ is an unorthodox take on a familiar world, a subversion of the cowboy genre with an unusual mix of genres and characters
Lifestyle
1 year ago

While travelling between towns, Kidd comes across the wrecked remains of a wagon whose black driver has been lynched and finds the terrified girl the driver was transporting. He takes it upon himself to deliver her to her surviving relatives.

Johanna (Helena Zengel) is a young girl of German origin whose biological family were killed by the Kiowa people, who took her and raised her as a member of their tribe, before they were attacked and killed, leaving her once again without a family. She dresses like a member of the Kiowa, speaks their language and seems to have little memory of her parents.

Kidd dutifully sets about protecting her from the nasty attentions of an increasingly aggressive cast of vultures - from sex-slavers to racist bitter-ender townsfolk living under the yoke of a tyrannical businessmen, to indifferent Union soldiers too busy exterminating the last of the Native American tribes to be bothered with her fate.

Along the way, predictably, a bond develops between the war-weary widower and the feisty, stubborn but street-smart girl in his charge. Kidd teaches Johanna the importance of reading and the news as one of the few sources of information you can trust in a world tinged with uncertainty and anger at government policies that ordinary people don't seem to believe serve their best interests.

As the 21st-century equivalent of the quiet-spoken, righteously moral Western heroes played in the Hollywood Golden Age by actors such as Gary Cooper and Henry Fonda, Hanks gives his heartfelt best as a man driven by idealism and faith in the objective power of the news who can also draw his gun when he needs to and stand by Johanna in the face of insurmountable obstacles, be they human foes or natural disasters.

He's ably supported by the young German actress, Zengel, who manages to pull off a difficult balance between shrill hysteria and subdued empathy that makes her ultimately hard to dislike or forget.

WATCH | 'News of the World' trailer.

Greengrass has made his name for his particular abilities as a director of claustrophobic, adrenaline-fuelled immediacy in action dramas like Blood Sunday, United Airlines and the Jason Bourne franchise. Here he's more than able to deliver the tensions needed in the few action set pieces offered by the story but he's also good on the quiet, dramatic moments that rely on small, moving, often wordless interactions between the odd-couple leads.

Ultimately, News of the World will play as familiar to anyone who's watched Western classics such as John Wayne's The Searchers, and there's an obvious link in its older man, young girl pairing to the Coen Brothers' True Grit, but it's saved from complete yawning "seen-it-all-beforeness" by the strength of its central performances and a theme that resonates in a world recently devastated and perplexed by the insanity of fake news wars and conspiracy theories.

• 'News of the World' is available on Netflix.

This movie is a smart, darkly humorous, sometimes cringeworthy tale of corruption at a real-life high school
Lifestyle
2 years ago

Mark Ruffalo stuns in complex drama, 'I Know This Much is True'

If Covid-19 is getting you down, this unrelentingly tragic miniseries is just what you need to make you realise that life could be so much worse
Lifestyle
1 year ago