It was bombshells, sweet reveals and shocking claims as the duo spoke to Oprah Winfrey 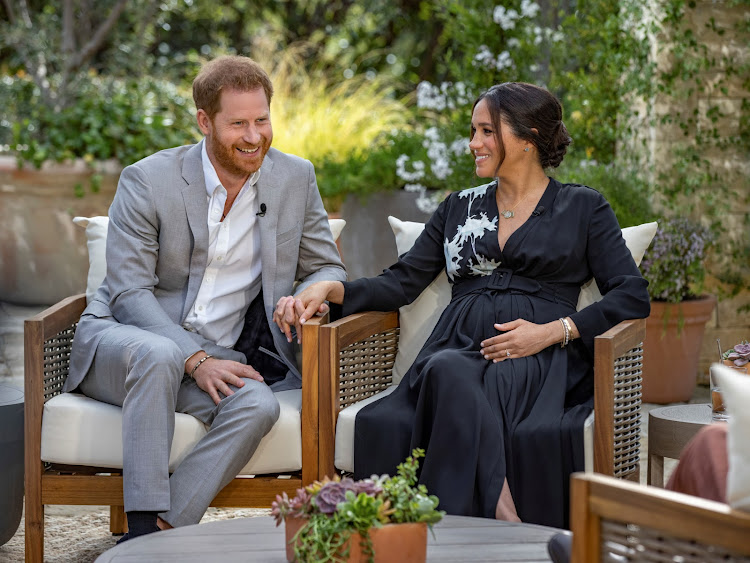 Prince Harry and Meghan, The Duke and Duchess of Sussex, give an interview to Oprah Winfrey in this undated handout photo.
Image: Harpo Productions/Joe Pugliese/Handout via Reuters

It was two hours filled with bombshells, shocking revelations and sweet moments when the Duke and Duchess of Sussex, Prince Harry and Meghan, had a sit-down with Oprah Winfrey.

The couple had a “wide-ranging” interview with the queen of talk show where no topic was off limits.

The duchess and duke made startling revelations and shared big news during the two-hour special, which set social media abuzz a week before it aired first in the US and then in SA on Monday evening.

As reaction continues pouring in after the explosive interview, here's a roundup on some of the biggest issues tackled.

Prince Harry and Meghan Markle were married in secret three days before their official wedding in 2018.
Lifestyle
1 month ago

1. ON FEELING TRAPPED AND UNPROTECTED

The dominant theme throughout the interview was the lack of support and protection for the couple from the palace, during their tenure as senior royals and after they stepped down.

Meghan said she had been silenced by “the Firm” — which Elizabeth heads — and that her pleas for help while in distress at racist reporting and her predicament had fallen on deaf ears.

“I just didn't want to be alive any more. And that was a very clear and real and frightening constant thought. And I remember how he (Harry) just cradled me,” Meghan said, wiping away tears.

The duchess told Winfrey people within the royal institution not only failed to protect her against malicious claims but lied to protect others.

She later said she regrets trusting that the institution would protect her.

The prince also spoke of his feelings of being trapped within the royal institution, despite his privileged upbringing.

Prince Harry on stepping back from royal duties, relationship with dad and brother

The Duke of Sussex, Prince Harry, has revealed he would've never stepped back from royal duties had he not met wife Meghan because he, like his ...
Lifestyle
1 month ago

Winfrey pressed the prince on what he meant by being trapped, to which he clarified that he was “trapped within the system”, like the rest of his family.

“My father and my brother, they are trapped. They don't get to leave and I have huge compassion for that.”

Another pressing issue the duo discussed with Winfrey was the racism the duchess and later her son was subjected to.

The duchess detailed conversations that happened around her son Archie, including the decision to not give him the title of prince or security. This was in tandem to "concerns" about how dark his skin could possibly be.

Harry was later asked about this and while confirming there were conversations around that, refused to detail what exactly happened or who was behind those conversations.

Prince Harry and Meghan Markle told Oprah Winfrey there were concerns about how dark Archie's skin would be.
Lifestyle
1 month ago

“That conversation, I'm never going to share. It was uncomfortable, awkward,” he said.

The prince also spoke of his family's silence on the racism aimed at the duchess, despite UK politicians coming out in support of Meghan.

Of course it wasn't all bombshells and shocking revelations during the two-hour sit-down. There were sweet moments too, especially when the couple revealed the sex of their unborn baby. Harry and Meghan revealed to Winfrey they were expecting a baby girl later on this year, adding that this was the last child they'd have.

“Amazing, just grateful, like to have any child, to have any one or any two would've been amazing but to have a boy and then a girl. I mean what more can you ask for?

The duke and duchess made the sweet reveal during their bombshell interview with Oprah Winfrey.
Lifestyle
1 month ago

4. BEING FINANCIALLY CUT OFF AND RELATIONSHIP WITH FAMILY

Prince Harry revealed that he was financially cut off after the decision to step back from royal duties and that his father, Prince Charles, refused to take his calls at some point. He revealed that the money his mother left him helped them weather the storm.

US director Tyler Perry also offered the couple a home and security when they initially moved to the US.

The prince divulged on his current relationship with various family members, saying he spoke with his grandmother regularly but “there's a lot to work through” with regards to his relationship with his father as he felt “let down”.

He reiterated that he'd always love his brother William “to bits” but that they were on different paths. He later explained that their current relationship was “space” and remained hopeful that time would heal the relationship.

While Buckingham Palace has not issued a statement in reaction to the explosive interview and is reportedly not expected to do immediately, British Prime Minister Boris Johnson did weigh in on the racism claims levelled against the royals.

“Obviously it is a matter for the palace,” his spokesperson said when asked about Meghan's comments that someone in the royal family raised concerns about how dark the couple's son's skin might be.

“You've got what the prime minister said previously about there being no place whatsoever for racism in this country, he's said that on a number of occasions.”

Prince Harry said he felt let down by his father Prince Charles, and that his late mother Diana would have been angry and upset about the way the ...
Lifestyle
1 month ago

A highly anticipated Oprah Winfrey interview with Prince Harry and his wife Meghan airs on US television later on Sunday, amid what one royal watcher ...
Lifestyle
1 month ago

Meghan, the wife of Prince Harry, accused the British royal family of racism, lying and pushing her to the brink of suicide in an explosive televised ...
Lifestyle
1 month ago

Meghan, the wife of Prince Harry, said there were concerns about how dark her son Archie's skin would be before his birth and such worries explained ...
Lifestyle
1 month ago
Next Article