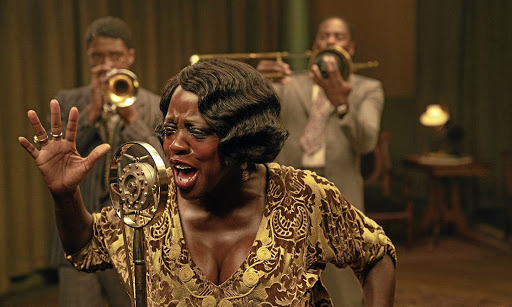 Viola Davis in 'Ma Rainey's Black Bottom', one of several Oscar-nominated films you can stream on Netflix.
Image: Netflix

With 2021's Oscar nominations announced, it's time to catch up with the films that will battle it out for Hollywood's highest accolade on April 25.

Plus, this year's nomination list features movies you can watch right now from the comfort of your home:

Leading the race with 10 nominations, David Fincher's labour of love about the making of Orson Welles's legendary Citizen Kane is told through the story of his alcoholic collaborator Herman Mankiewicz (Gary Oldman, in his third Oscar-nominated performance). It's an evocative love letter to the golden age of Hollywood and one of its unsung mavericks.

Read our full review of this film here.

Read our review of the film here.

Riz Ahmed gives a Best Actor-nominated performance in this moving and technically innovative story of a heavy metal drummer who loses his hearing. It is also nominated in the Best Picture category.

THE TRIAL OF THE CHICAGO 7

Aaron Sorkin's tale of the absurdities of the Nixon government's attempts to silence those who took their protest against the Vietnam War to the streets of Chicago in 1968 earned the Oscar-winning screenwriter a fourth nomination and his first for Best Original Screenplay, as well as a Best Supporting Actor nod for Sacha Baron Cohen, a Best Picture nomination and three other nominations.

Read our full review of this film here.

WATCH | 'The Trial of the Chicago 7' trailer.

Ron Howard's sentimental adaptation of the bestselling book by JD Vance was widely slated, but it has earned an eighth nomination for Glenn Close. Whether or not the academy will give it to her for the best part of a mediocre film remains to be seen.

Love it or hate it, everyone was talking about South African filmmaker Craig Foster's documentary chronicle of his love affair with a cephalopod he befriended in the kelp forest off the coast of his Cape Town home. It moved the academy enough to earn it a place in the final running for this year's Best Documentary feature.

The film gained international success after its release on Netflix in September last year.
Lifestyle
1 year ago