After prestigious training at Shakespeare’s Stratford-upon-Avon, this rising star is leaping into a career as a writer, director and actor 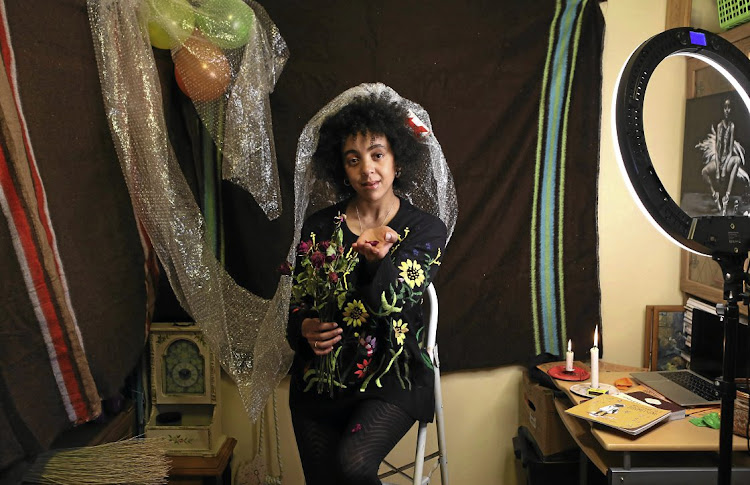 Buhle Ngaba has written a play, a children’s book and paid her dues in the theatre, working with luminaries such as John Kani.
Image: Ruvan Boshoff

The following year, in 2016, Ngaba became the first black South African woman to win a bursary to the Royal Shakespeare Company in Stratford-upon-Avon and has, since her return, been breathing fire and life into the bard’s classics for the next generation of South Africans through her performances and teaching.

“At school, Shakespeare was stuffy and far removed from me,” says Ngaba, whose programme, Shakespeare Grounded, is the opposite.

“I dare to place the importance of my own stories, my DNA, right there next to people’s perceptions of the Bard. I think our stories matter … and I am able to see them reflected in the stories Shakespeare penned.

“When you start looking at Shakespeare, you find so much. The more you know, the more it unfolds for you and the more you get the magic.”

Barely two years out of drama school, she was touring internationally with the legendary John Kani and actor Susan Danford in Janice Honeyman’s world premiere of Missing, a play about an exiled ANC cadre, his family and the challenges of “going home”.

Ngaba was doing coaching with accent doyen Lesley Manim, who mentioned her to Kani. Her incandescent presence landed her the role of the exile’s daughter the moment she walked into the audition.

“We put her through difficult paces,” says Kani. “We pushed her on identity. On the lightness of her skin. On the concept of being African. Every question she answered right. She had done the most intensive research on the children of exiles. She laid her soul bare.

“I thought: ‘This little kid has something in her.’ Buhle has a discipline and commitment that you rarely find in young actors.”

Apart from numerous awards and accolades as an actor, Ngala is also a talented writer, winning three writing fellowships this year.

The discovery of Julius Kesara, inscribed with her grandmother’s name, heightened her connection to Shakespeare and the black intellectuals who preceded her by almost a hundred years.

“In the translation, there was a link that goes beyond whiteness and a curiosity; why would a black man in the middle of North West one day in the 1900s want to do this? I developed an understanding, there is a place for me here. By the time I went to the Royal Shakespeare Company, I felt a bit emotionally connected.”

The 30-year-old actor, director and writer has a “deep hunger for knowledge”, reinforced by a work ethic which she learnt from her mother and theatre maestros. “John Kani would say you must work and work and work.”

On the desk in her Cape Town studio stands an hourglass, filled with white sand, by which she works. “I tell myself that all I have to do is focus on a particular project for one hour, then I’m free! If I find after an hour I’m enjoying myself, then I turn it for another hour and maybe even another,” she says of the flow.

At the start of our interview, she is breathing hard, from an online physical acting class to stay stage ready for the day theatres open again.

The veteran SA star has joined the ranks of some of England's finest.
TshisaLIVE
8 months ago

Until then, or beyond, Ngaba is seizing the virtual stage. She acted in the premiere of Together Apart at the first Virtual National Arts Festival this year, and the filmed version of her one-woman show Swan Song was screened at the festival.

“It is a coming-of-age tale about a young woman from Taung born with a winged scapula; a symbol of her sense of not belonging,” says Ngaba.

On May 31, she read Ophelia in Neil Coppen’s once-off rehearsed, live online adaption of Hamlet and she was an associate director for the performance.

Ngaba says her entry point to the play was always herself as Hamlet but, in this version, her heart belongs to the doomed Ophelia. She does not play her characters, she becomes them: her Ophelia is a young black girl. Spiralling into madness until she drowns herself in a river.

“The first sacrifice of a nation is always the young black girls. Entering your psychology on SA soil hit me harder and truer than I anticipated. I love you rebel girl #Hamlet #JusticeForOphelia,” Ngaba tweeted of the performance.

Ngaba’s electric take on Shakespeare breaks down barriers for youngsters, just as Baz Luhrmann’s modern Romeo and Juliet, with Leonardo DiCaprio, did in 1996. Pre-pandemic, fans would stop her in bookshops and the street to tell her this.

“When I was playing Bianca (in an all-women cast of The Taming of the Shrew) I walked into Crazy in Love by Beyoncé and I had these pink, long cornrows and a beautiful bubblegum dress,” says Ngaba, of the 2018 performance directed by Tara Notcutt, at the Maynardville Theatre in Cape Town. Bianca is the favoured younger daughter of a nobleman, courted by two suitors, while her older sister plays the shrew.

Danford and Kani inspired Ngaba to explore Shakespeare and apply for the Brett Goldin bursary in 2015. Danford prepared Ngaba for the gruelling round of auditions. She made it into the top six but was devastated not to win.

To get ready for that round, Ngaba immersed herself in Shakespeare until the heartbeat of his iambic pentameter pulsed through her blood. “I had a heightened understanding of the text and so much more confidence,” she says.

“I’m not ‘good at Shakespeare’. You have got to find meaning in the words. It is a lifelong practice.”

In 2008, she graduated from Rustenburg Girls’ High School in Cape Town with distinctions — after being the first student to be both head girl and head of the boarding house. 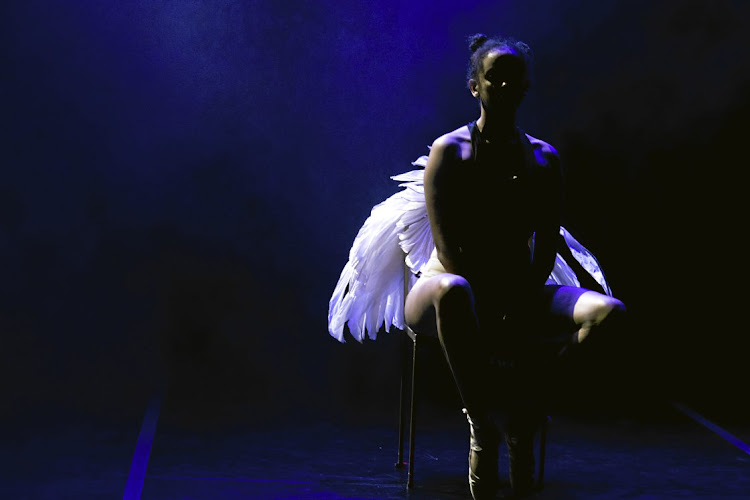 Being a leader in both the school and boarding house isolated her. “I had bouts of melancholy,” says Ngaba, who grew an Afro in 2008, before shaving it off in solidarity with a relative who had cancer.

In 2009 she moved to Makanda to study drama and history at Rhodes University, doing a six-month exchange at Leeds University in 2011.

The day after she turned 21, she auditioned for her first job with Eastern Cape drama company Ubom!, famous for collaborations with mime and visual theatre virtuoso Andrew Buckland.

“You were supposed to write a letter of motivation and I was hungover, so I asked my housemate to draw a cartoon version of me with six thinking bubbles, and I wrote a few lines. The audacity!

“It was the longest audition of my life and by the end I was vomiting oranges. Andrew Buckland was amazing, a beast,” remembers Ngaba, who loves mime, clowning and physical theatre.

For a year Ngaba worked with the community-based company and loved it. “It taught me resilience. There were six of us and we would do everything, create sets together, make the music. I remember once we got stuck on the road in a storm and had to pull off the wet set to get going, and then arrive at the school and perform.”

After Ubom!, Ngaba went on stage in Cape Town as Mrs Lyons in David Kramer’s adaptation of Blood Brothers. “But I opened up to rough reviews and I was young. I would cry so much,” she says.

“I’ve learned I don’t have to rush. I’ve said ‘no’ to a lot of stuff which looked fun and pretty, but I’m finally seeing the opportunities I have been working for all my life.”

In 2016 Ngaba wrote a children’s book, The Girl Without a Sound, and the demand for it crashed the website when orders opened. The book was translated into SA’s 11 official languages, of which Ngaba speaks five.

I’ve learned I don’t have to rush. I’ve said ‘no’ to a lot of stuff which looked fun and pretty, but I’m finally seeing the opportunities I have been working for all my life

“I was a broke actor with R50 in my pocket and had some time on my hands, so I decided to write.”

Now she is paying homage to her late aunt Mompati in a book — based on the PhD thesis her late mother never got to finish. Mompati was one of the leaders of the 1956 women’s march to the Union Buildings.

She passed away in 2015 and was honoured with a state funeral. Ngaba’s research ultimately led her to the dusty Vryburg garage with archival treasures in North West.

“It was the worst thing that happened to me. I’m trying now to teach myself to grow into something like the shadow of the women who raised me and loved me greatly,” says Ngaba. That goes beyond an unyielding work ethic, to joy.

Her yogi motorbike-riding mother had a zest for life which reminds Ngaba she needs to take time out. “I used to work myself too thin,” says Ngaba, who is trying to be strict about rest days.

Invited four years ago to deliver the valedictory speech at her old school, she quoted from The World According to Garp, by John Irving. “The words ‘you are either somebody’s wife or whore’ rang out to the back of the school hall,” she laughs, recalling how she encouraged the students to be “whoever they want”.

That’s how she lives. “I took the old school route but now I feel like a rock star, being able to do what I want to do,” says Ngaba.

Wherever her star glitters, Ngaba’s mastery of Shakespeare is sure to enhance its brightness.

“In Shakespeare, grief and loss are such huge themes and I get them. They don’t feel far from me now,” says the actor, expressing the zeitgeist of the pandemic.

HEIR TO THE KING?

John Kani, the “grandfather of SA theatre”, has nothing but praise for his “adopted daughter” Buhle Ngaba.

“Buhle was the light of our company, always smiling,” he says, of the years they toured the world together.

“Buhle is an accomplished performer. I’m really, really proud of her as an actor, an artist and a creative spirit.  She is a brilliant actress — and she never stops.”

Theatre heavyweights John Kani, Athol Fugard, Nthati Moshesh, Fiona Ramsay and Gcina Mhlophe have lent their voices to a global campaign to save the ...
Lifestyle
7 months ago

Opera's no longer a 'white' thing, it's a language we can all speak, says singer

The local opera scene is rich in diverse talent, but poor in terms of opportunities to perform. So lend our stellar singers your ears
Lifestyle
8 months ago

'Follow your heart': SA celebs on what they'd tell their younger selves

Our team asked some stars what they wish they’d known sooner.
Lifestyle
7 months ago