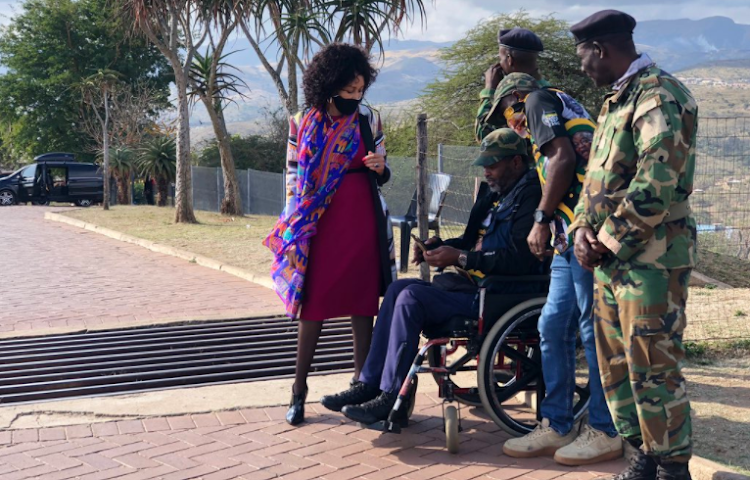 Human settlements, water and sanitation minister Lindiwe Sisulu had many on social media in meltdown mode when she arrived for a meeting at former president Jacob Zuma’s Nkandla homestead in KwaZulu-Natal on the weekend dressed to the nines.

A large crowd gathered at Zuma’s residence after the Constitutional Court ruled he was guilty of contempt of court and slapped him with a 15-month jail term. Many vowed to “defend” the former president.

Taking to social media on Sunday, Sisulu said she and others from the ANC had been “deployed” to meet Zuma and “make sure everything is in order”.

Attempts to get further comment from Sisulu about her visit to Nkandla were unsuccessful at the time of publishing this story. Comment will be included once received.

It was the minister’s choice of outfit that saw her hit the Twitter trends list. A post showing off her look was shared more than 1,000 times in under 12 hours, including by EFF leader Julius Malema and sports personality Robert Marawa.

Many questioned how Sisulu was able to navigate the terrain at Nkandla in designer heels, while others focused on the faces of those who saw her at the residence.

She climbed on those small brics

Mxm... Let the minister enjoy life and be stylish!

And she is beautiful.

This woman serves...each and every time

Don't suppose you asked why they aren't wearing masks?

Even in the midst of crisis.😜

Sisi how are going to toy toy in Jimmy Choos? pic.twitter.com/LC5A79YEA9

Sharp is she gonna take off her shoes to pass here or bo mabena will kuka her? 😴😒 pic.twitter.com/HHrWUnrlJo

On Tuesday last week the Constitutional Court found Zuma guilty of contempt of court for failure to comply with an order of the court to appear before the state capture inquiry.

On Friday, Zuma applied to the Constitutional Court to rescind its order, and the high court in Pietermaritzburg to stop police from arresting him while his application is being heard.  The ConCourt will hear the matter on July 12.

The SA Police Service announced on Sunday that it had “enhanced” its deployment of “security forces” in KwaZulu-Natal as large crowds flocked to ...
News
3 weeks ago

'They will regret it one day': Zuma grasps at legal lifeline, insists he's done 'nothing wrong'

Former president Jacob Zuma has told supporters gathered at Nkandla he will not hand himself over to begin the 15-month sentence handed to him this ...
News
3 weeks ago

'Listen only to us': Magashule calls for anarchy within ANC structures as he supports Zuma

Suspended ANC secretary-general Ace Magashule on Sunday incited ANC branches and deployees to disregard party instructions and “listen only to us”.
Politics
3 weeks ago