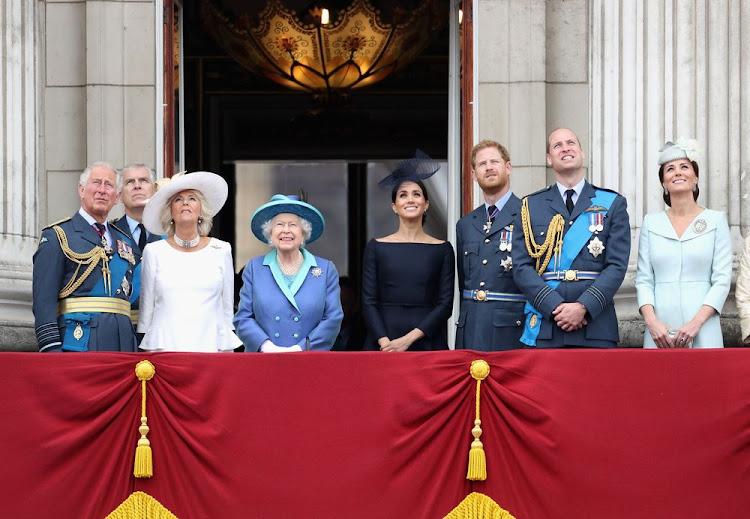 Just two weeks ago, the royals were enjoying a warm wave of public and media praise as the queen, marked seven decades on the throne. File image.
Image: Bloomberg/Chris Jackson

After the shame of Prince Andrew's US sex abuse lawsuit and Prince Charles embroilment in a cash for honours scandal, Queen Elizabeth catching Covid-19 has rounded off a week of terrible news for the British royals.

Buckingham Palace said on Sunday the monarch, who turns 96 in two months, was suffering mild symptoms after testing positive for the virus. But growing health fears and scandals involving the family are threatening to overshadow national celebrations to mark her 70th anniversary on the throne.

“I suspect this is not a week on which any member of the royal family will look back with particular pleasure,” said Matthew Dennison, author of a recent biography “The Queen”.

Just two weeks ago, the royals were enjoying a warm wave of public and media praise as Elizabeth, now the world's oldest and longest-reigning monarch, marked seven decades on the throne, a milestone never reached by any of her predecessors over the last 1,000 years.

The confidence was such that the monarch was able to announce that Camilla, the once vilified second wife of 73-year-old heir Prince Charles, should become Queen Consort when he became king.

Queen Elizabeth II, the UK’s 95-year-old monarch, has tested positive for Covid-19 and has mild symptoms, her office at Buckingham Palace said.
News
5 months ago

But, then last Tuesday it was announced Prince Andrew, Elizabeth's second son, had paid to settle a claim that he sexually assaulted a teenage girl decades ago and, while he admitted no wrongdoing, royal experts say the outcome of the case spelt the end of his public royal role.

Two days later, police said they were investigating allegations that honours were offered to a Saudi national in return for donations to one of Prince Charles's charities.

The same day, Elizabeth quipped she could not move much when she carried out an in-person engagement at her Windsor Castle home, though a palace source said that was because she was feeling slightly stiff rather than being unwell.

“Thank God For The Queen”, the Sun tabloid said on its front page the after day.

But on Sunday, the Palace announced the queen, who has been fully vaccinated, had tested positive for Covid-19. While officials said she would still be carrying out light duties, it has cast a pall over her Platinum Jubilee year.

“This is intended to be a year of celebration for the queen ...and events that detract from that obviously are regrettable,” Denison said.

“But of course the worst possible thing is that the queen could be ill and therefore not enjoy this Jubilee. So..., this is of course bad news.”

For most people, Elizabeth is synonymous with Britain, and her recent health scares have raised questions about the monarchy's future that have hitherto received little public attention.

What the future holds when her unifying presence is gone and her son Charles, who polls show is much less popular, succeeds her is becoming of increasing concern for both the royal family, and the country as a whole.

“I'm just really upset...Everyone loves her,” student Gerard Smith, 19, told Reuters in Windsor. “She's been my whole lifetime and the lifetime of almost everyone. Hopefully, she makes it though.”

Despite her age, Elizabeth still carries out large numbers of official duties, performing 113 official engagements during the year from April 2020 to March 2021.

While the loss of husband Prince Philip, who died last April aged 99 after more than seven decades by her side, did not affect her work schedule, recent illness has.

She spent a night in hospital last October for an unspecified ailment and has had to cancel engagements since then on doctors' advice, while also on one occasion she suffered from a sprained back.

Royal rules dictate that if the queen cannot perform her duties because of ill health, then four senior royals can be appointed Counsellors of state to act on her behalf.

However, two of those four options are Prince Andrew, who has effectively been stripped of his royal titles, and her grandson Prince Harry who stepped down from official duties to move to Los Angeles with his American wife Meghan, from where they have been highly critical of Buckingham Palace.

Last week, a hearing in the court case he has brought against the government over its refusal to allow him to pay for police protection was heard at the High Court in London

“The first choice would be the Prince of Wales (Charles) and the Duke of Cambridge (grandson Prince William), and so as long as they are available to carry out those functions, then clearly this remains a workable arrangement,” Dennison said.

Buckingham Palace has previously said the issues of counsellors was not a debate in which it would get involved.

“It has come thick and fast for the queen in the last few days, weeks and months,” Roya Nikkhah, royal editor of the Sunday Times newspaper, told BBC radio. “She's had a rough old ride from her family, a lot of hassle in a year that should be celebratory, but on she ploughs.”

Cor blimey! It seems the queen will be forking out millions for her wayward son

A look at Andrew’s finances reveals it’s unlikely he’ll be able to come up with the £12m Giuffre settlement. So who will?
World
5 months ago

Duke of baulk: why Andrew had no choice but to settle his sex assault case

Prince Charles thanked his mother Queen Elizabeth for publicly stating her desire that his wife Camilla becomes Queen Consort when he becomes king, ...
Lifestyle
6 months ago